Where She Stops, Nobody Knows

Do you recognize the title? Do you recall from whence it came? The words accompanied the ticking of a spinning wheel in "The Original Amateur Hour", a radio talent show and later a TV show. The entire phrase was, "Round and round she goes, and where she stops, nobody knows."
Dreaming is not entering a talent show (Lord help us if she was!) Nor, as the title might suggest, is she heading on the road again (at least not yet!) Dreaming is on the crest of a wave wondering which way she will tumble!

It all started innocently enough, as many adventures do. It began with the arrival of a magazine from Tiffin, the company that built our motorhome. 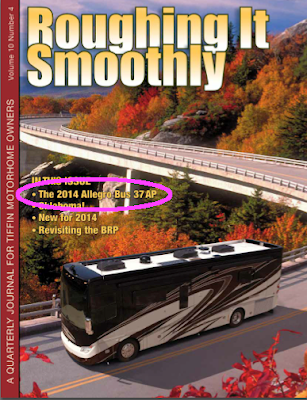 Dreaming likes to look through magazines like this, paying close attention to the articles featuring new motorhomes. She noticed the teaser title on the cover (which she has circled for you.) Dreaming likes to see new layouts and read about new features. The article on the 2014 Allegro Bus 37AP would be fun to read, so she said to herself!

And she was not disappointed. The pictures and accompanying text were very informative. 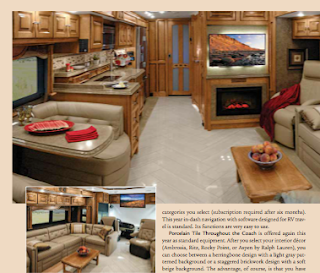 and the bus was very pretty! 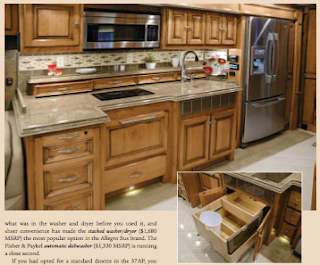 It is more a home than a bus.
What a nice bus she thought to herself,
and tossed the magazine on the coffee table.

That would have been the end of the story, if Mr. Dreamy hadn't seen something online about the new bus. He mentioned it to Dreaming, whereupon she unearthed the magazine and handed it to her dear husband. He went off to the place he hangs out in and perused the pictures and read the article. He became intrigued.

The Dreamers began to wonder....
How much is their current RV worth in trade in?
What is the "real" sales price?
Is it the MSRP or is it substantially lower?

When the Dreamers begin wondering things like that,
it sometimes gets a bit dangerous.

Mr. Dreamy has talked to some sales people...
Mr. Dreamy has some prices...
But, there are no 37AP buses built with what we want.
It could take 4 months to get a special order bus.
Maybe it isn't something we can do...

...but it sure is nice to dream,
and consider the"what if's"
and not dwell on the "if only's"!

Email ThisBlogThis!Share to TwitterShare to FacebookShare to Pinterest
Labels: Bus