Putting the Bubbles in the Bottles

Our group had a tour of the Korbel Winery, which has been producing wine on this site in Sonoma County, CA since 1882. 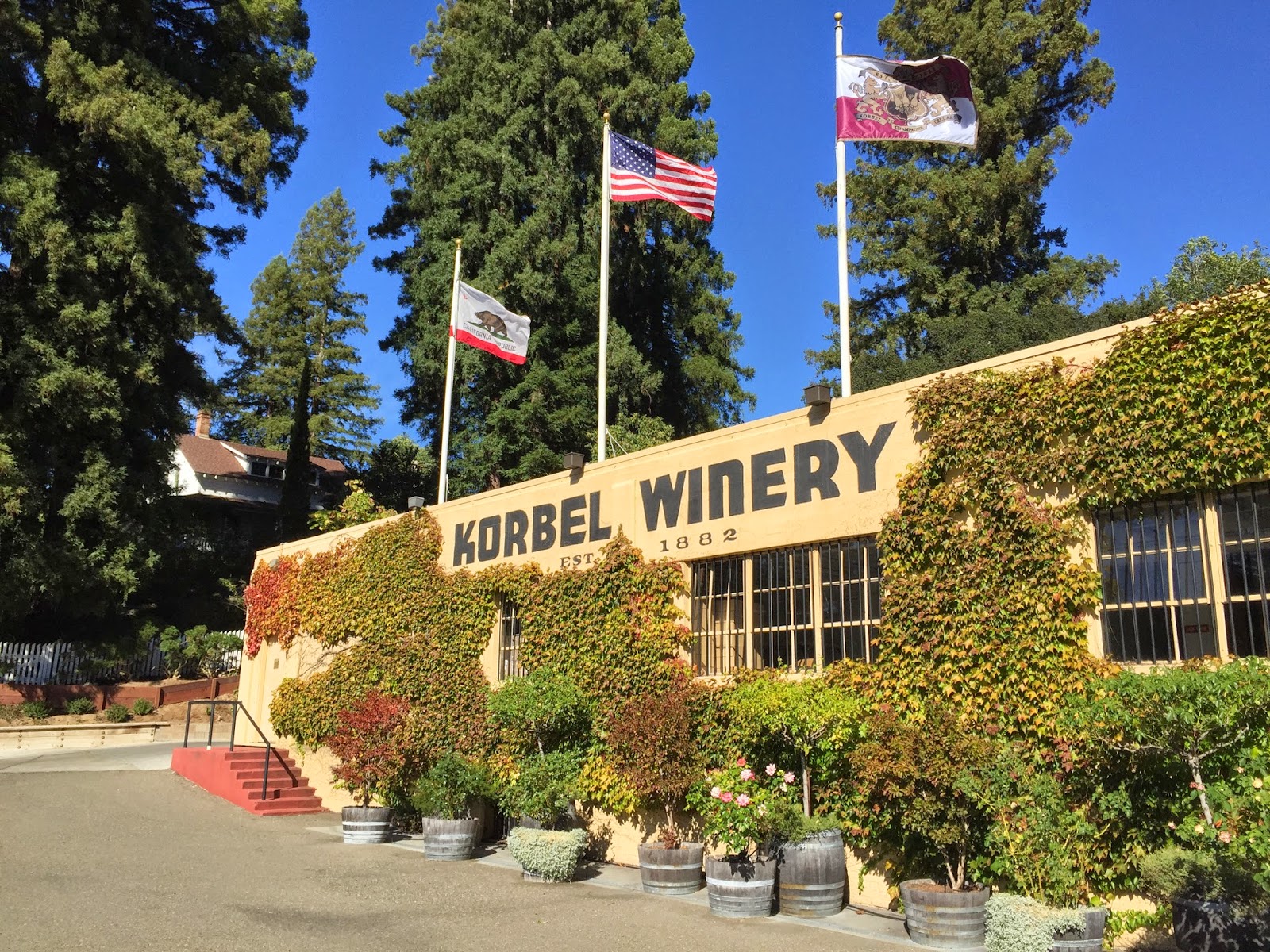 Here we learned the fascinating story of the founders, three Bohemian (Czechoslovakian) brothers, as well as learning more about the process of creating "champagne style" wine. (The folks in the Champagne region of France took exception to other effervescent wines bearing their name! Producers outside of the region must identify their product in a slightly different manner, thus Korbel creates "California Champagne" or "Russian River Valley Champagne")


Here is our group standing outside the ivied walls of the original building. The tower in the background is identical to a tower in which Francis Korbel was imprisoned after firing a shot in an uprising against the Government in Prague. He and his family had an interesting past! 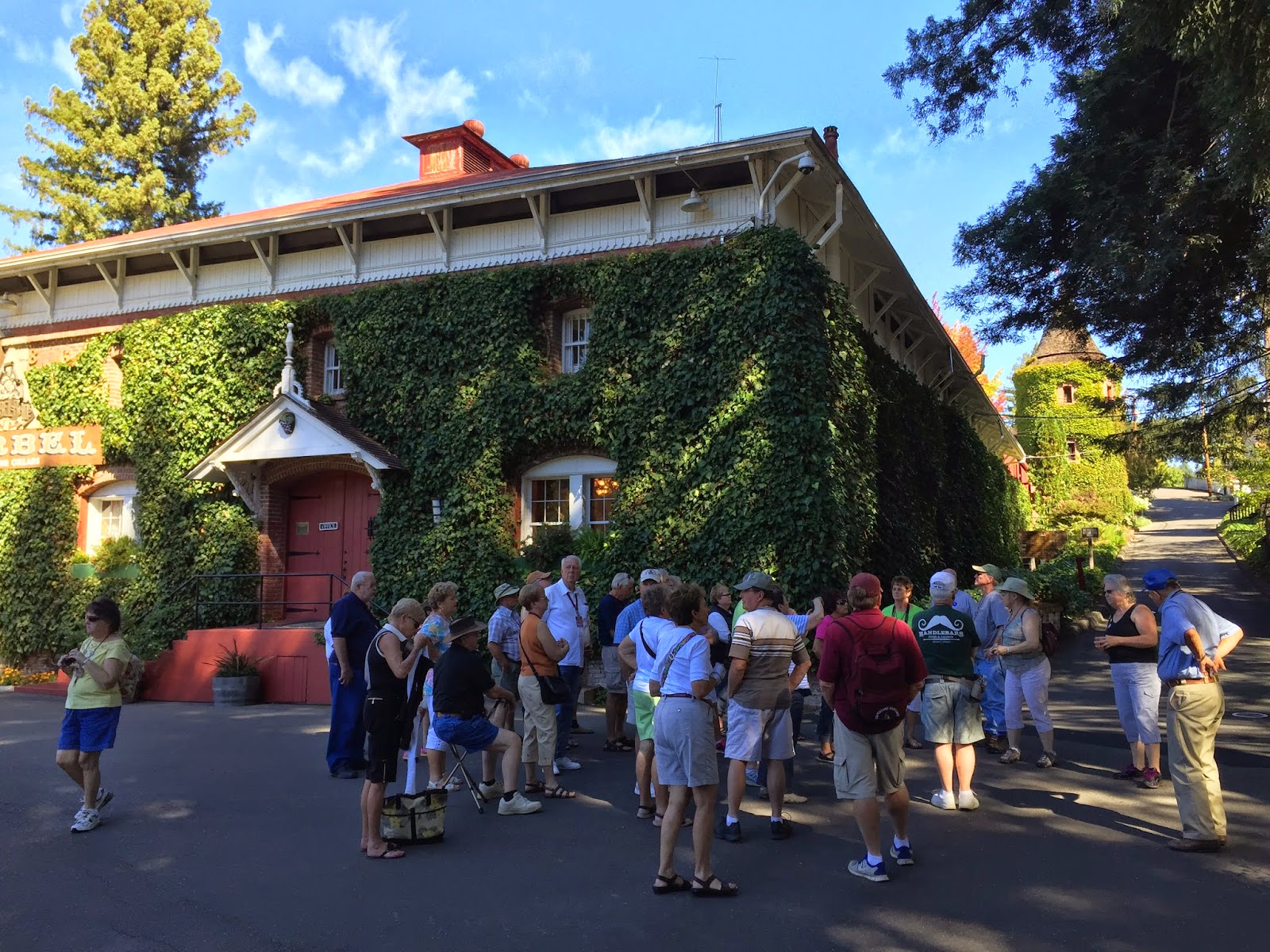 The large, original casks were created on site in the cellars.
Currently Korbel uses only small oak barrels for fermentation
of their finer wines. 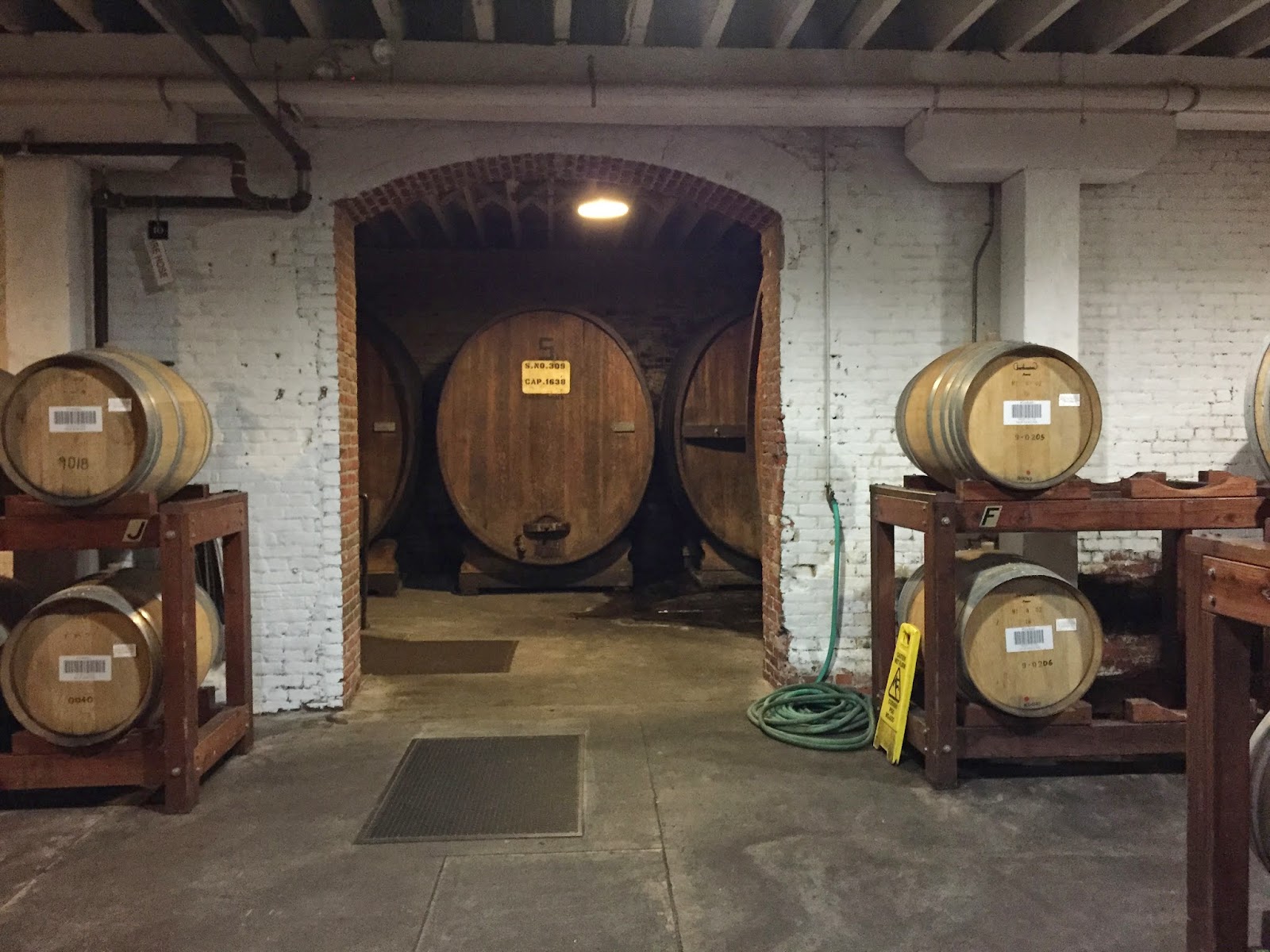 After fermentation the wine is bottled and capped, using a cap similar to that on a beer bottle. The bottles are stored for varying periods of time. The candle shows how the vintners lit their cellars where bottles were stored, prior to electricity. 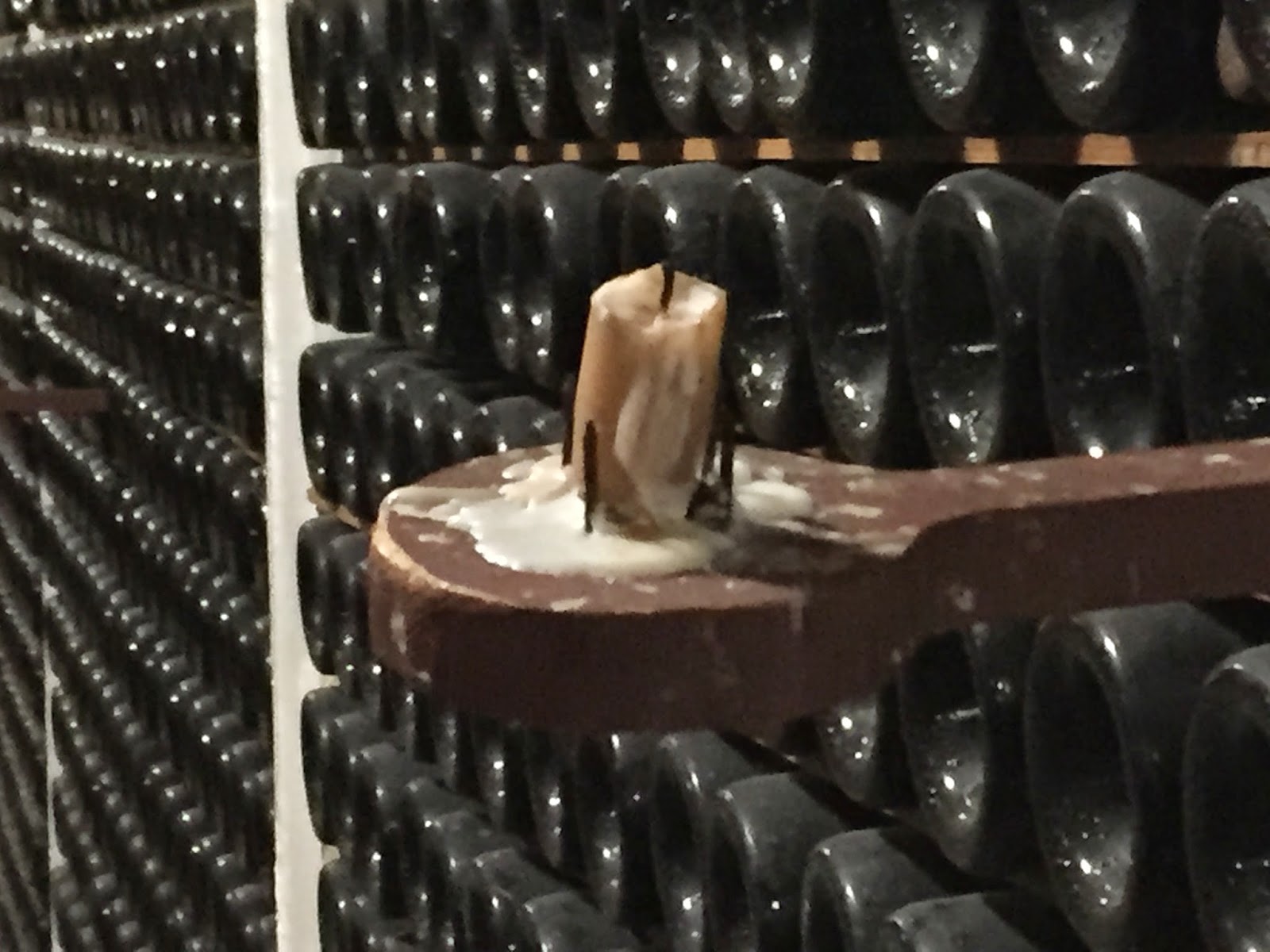 After the fermentation process is complete the bottles are moved to riddling racks. Here the bottles are held at a downward angle. Vintners shook and turned each bottle several times a day. Adolf Heck, Korbel's second owner, created the first automated riddling rack. Riddling causes the sediment to move into the neck of the bottle. 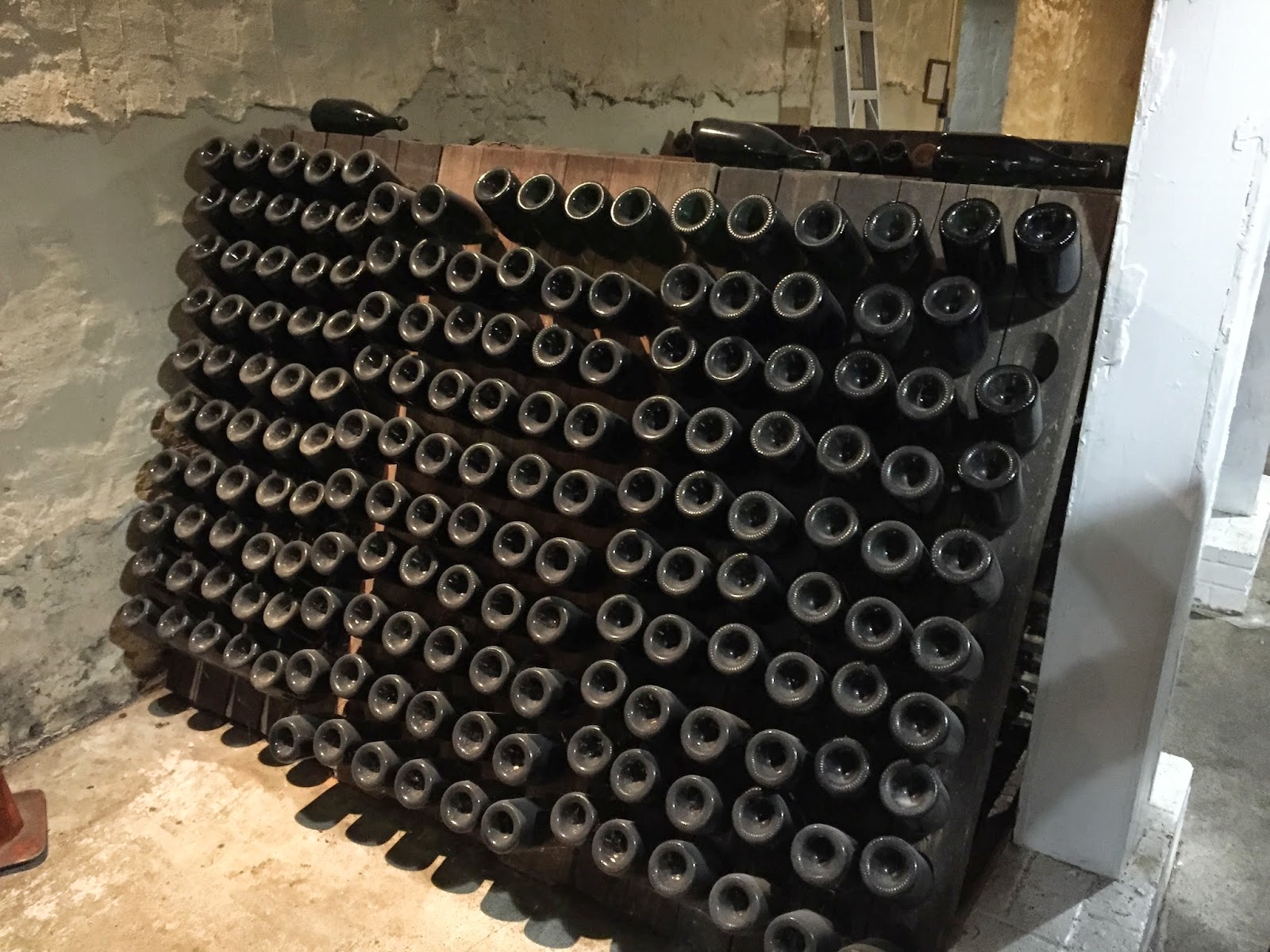 The machines pictured below are those that were originally used to finish the bottling process. Following riddling, the neck of the bottle is held in a slurry of salt and ice to freeze the sediment plug. The temporary cap of the bottle is removed and the sediment plug is pushed out by pressure created by the slightly warmer contents of the bottle. (There are no bubbles in the wine at this time.) A mixture of wine and additional sugar is added to the bottle. The sugar encourages fermentation to begin again, causing the build-up of carbon dioxide, and this is what makes the 'champagne style' bubbles. Each type of wine has a different "dosage" (pronounced with a French accent, like dressage). The dryer (Brut) champagnes have a small amount of sugar added. We tasted one with a dosage of 1. It was almost lip-puckering dry. The sweetest variety I tried (and liked) had a dosage of 6.5. It was much sweeter. The French have high opinions of their process, which is (as I understand it) the same thing that is used to create bubbles in lowly beer! 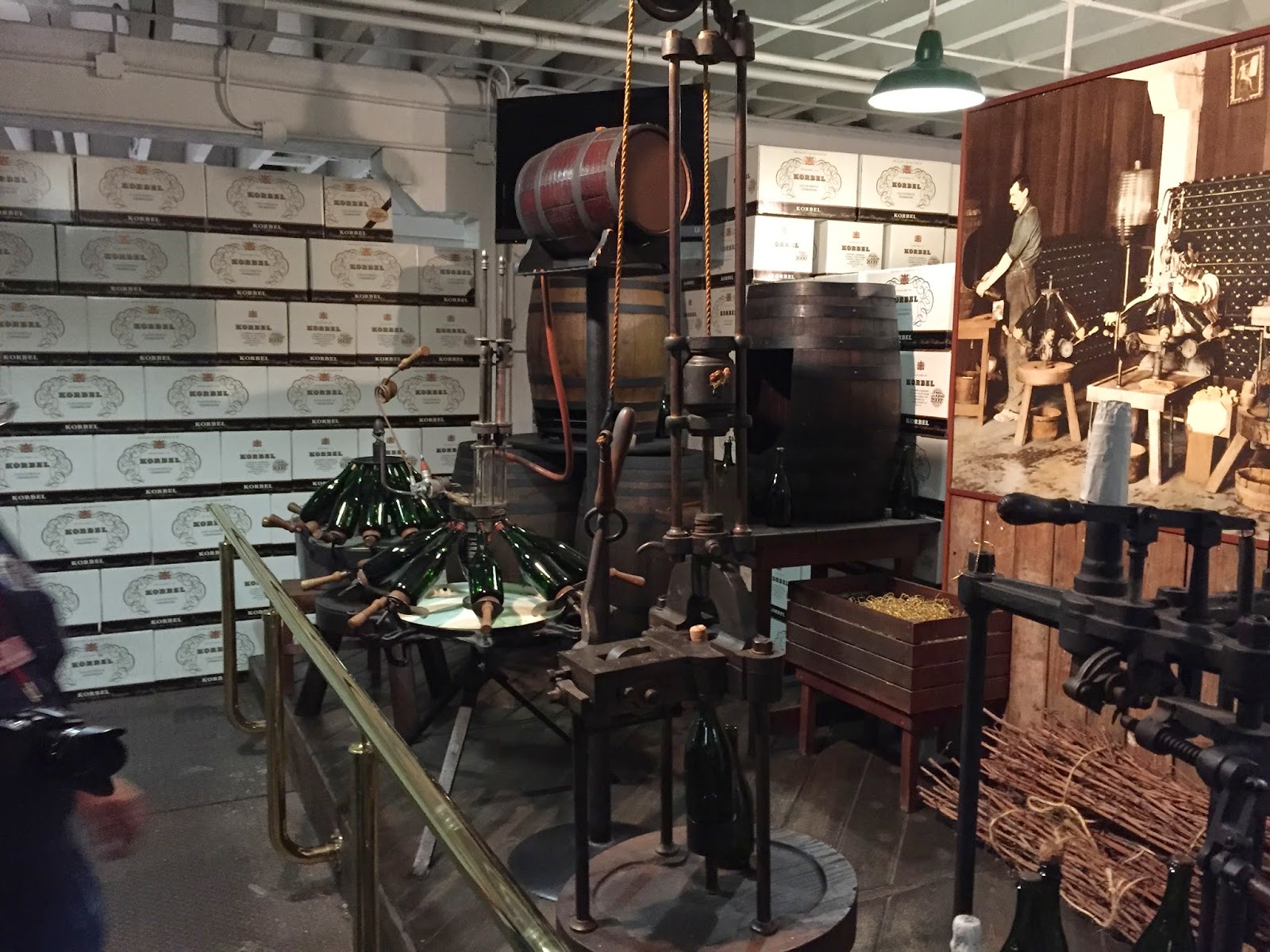 Once the dosage has been added, the bottles are corked. If you have ever had Champagne, or a 'Champagne style' wine, then you are familiar with the cork, which is different than that used in regular wines. The cork is much wider in diameter, and before it is pressed into the bottle, the diameter of the cork is the same along its entire length. The corking machine compresses one end of the cork and it is driven part way into the neck of the bottle. The upper portion extends over the lip of the bottle and is held in place with a wire cage. This helps seal the bottle more effectively than a traditional cork.

There are other means of adding bubbles to wine, including simply adding carbon dioxide in the final bottling or performing a secondary fermentation in the tank and bottling it under pressure.

I have included a video we saw at the winery that reviews the history of Korbel.