You remember that song from the Beatles?

So, I guess this post could be about missed opportunities!

But, heck, you can't really blame me. Mr. Dreamy was driving the motorhome on some twisty, turny, bumpy roads. The few times I had the camera poised and ready, all I caught was a blur of roadside! Or, I'd be aiming the camera to starboard and the perfect shot was to port. But… capturing that picture would require that I jump out of the seat and hop back in the motorhome, lean over the dogs, and catch the shot out of that window. It wasn't gonna happen on those roads!


Here is one picture I managed.
It looks like the berries are almost ready for harvesting. 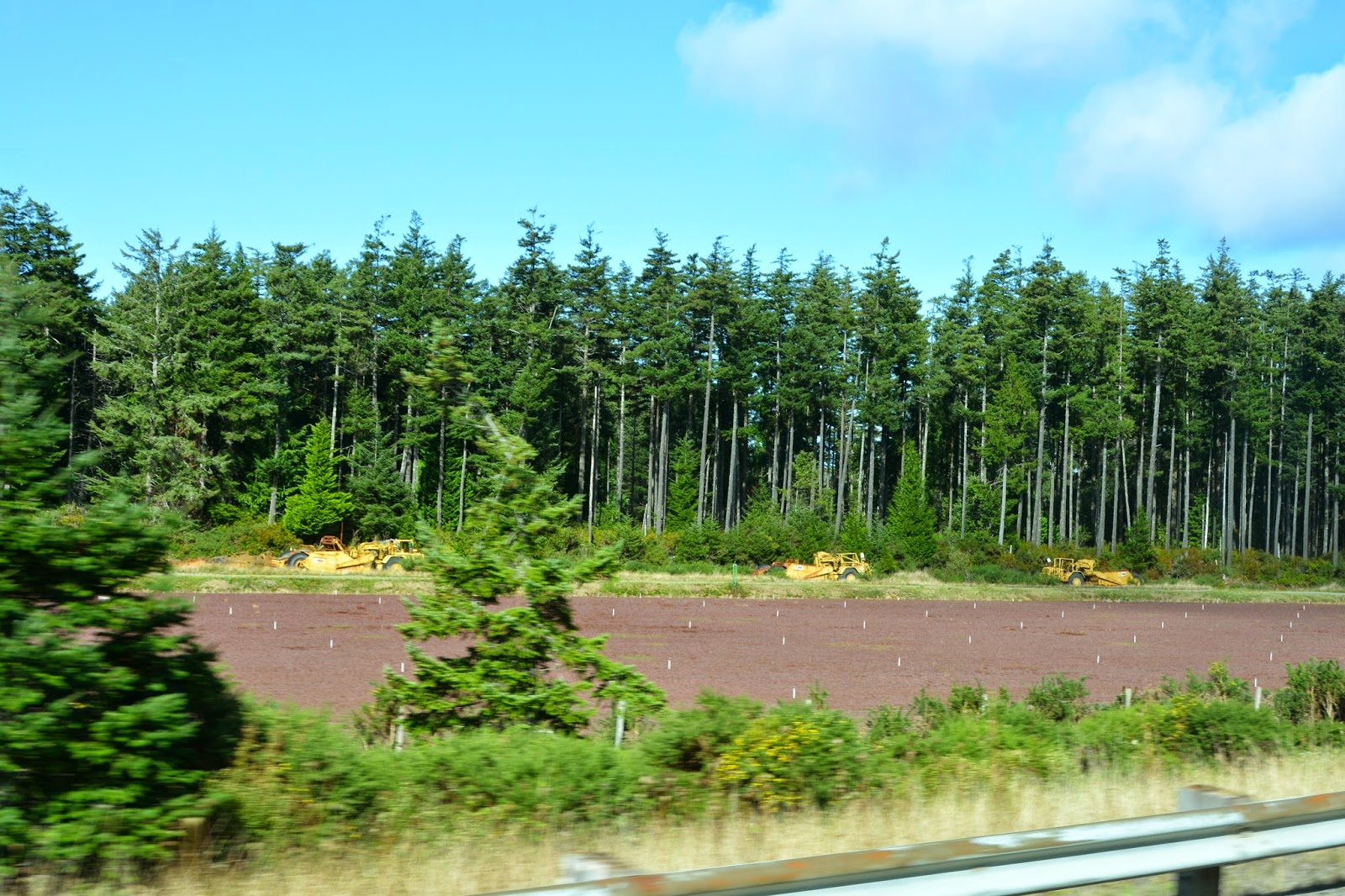 Up until this point I hadn't thought that much about cranberries, except remembering to pick them up for recipes around Thanksgiving.

I do enjoy the OceanSpray ads like the one below, featuring actors (no, they aren't really cranberry farmers) Henry Strozier and Justin Hagan.

My food geography planted cranberries some place in Maine, or maybe Rhode Island. Oops…. come to find out Washington and Oregon are huge producers of this quintessential American berry. Turns out the little berries were introduced to the early settlers by the Indians… and they were on the table for the first feast of thanks, and they were first cultivated by early settlers in the Massachusetts area.

Cranberries came to Bandon, OR by the hand of a millionaire-wanna-be who didn't quite strike it rich panning for gold, so he brought some cranberry vines from his former home, Cape Cod, and developed bogs in his new home, doing what he knew best. It turns out the climate and soil in the northwest works well for the berry, so it became one of the major crops of both Washington and Oregon. (Maine and Rhode Island are not major producers of cranberries, according to Wikipedia - care to guess the other top three states, without looking on Google?!)

The berries grow on short vine-like shrubs, anywhere from 2 - 8" in height. At first we thought the fields had been mowed, as everything looked so short and event. When the berries ripen, the fields are flooded and special beaters agitate the water, loosening the berries, which float to the surface. We saw one flooded field, which looked something like this:

The berries are 'herded' together and raked toward a conveyor system that reminds me of old fashioned water wheels. The berries are picked up, water drips away, and they are loaded into trucks.

The fields can also be harvested by hand, using special rakes.

It was interesting to see the fields with berries at different stages,  and to see trucks carrying the berries to who-knows-where. I love that traveling has literally opened my eyes to new things and new learning!

And the answer to the top cranberry production states….