Wine goes with food. It is a given. Those who know are always talking about 'pairing' - making suggestions of wines to complement the flavor of the food. Pairing our adventures in the wine regions of California also included adventures in eating. Two of our dining experiences stand out.

The first, a trip on the Napa Valley Wine Train.

Our group traveled first class, enjoying the ambiance of a renovated 1952 domed dining car. I guess you might think we had no class… as everyone began taking pictures of everyone taking pictures! 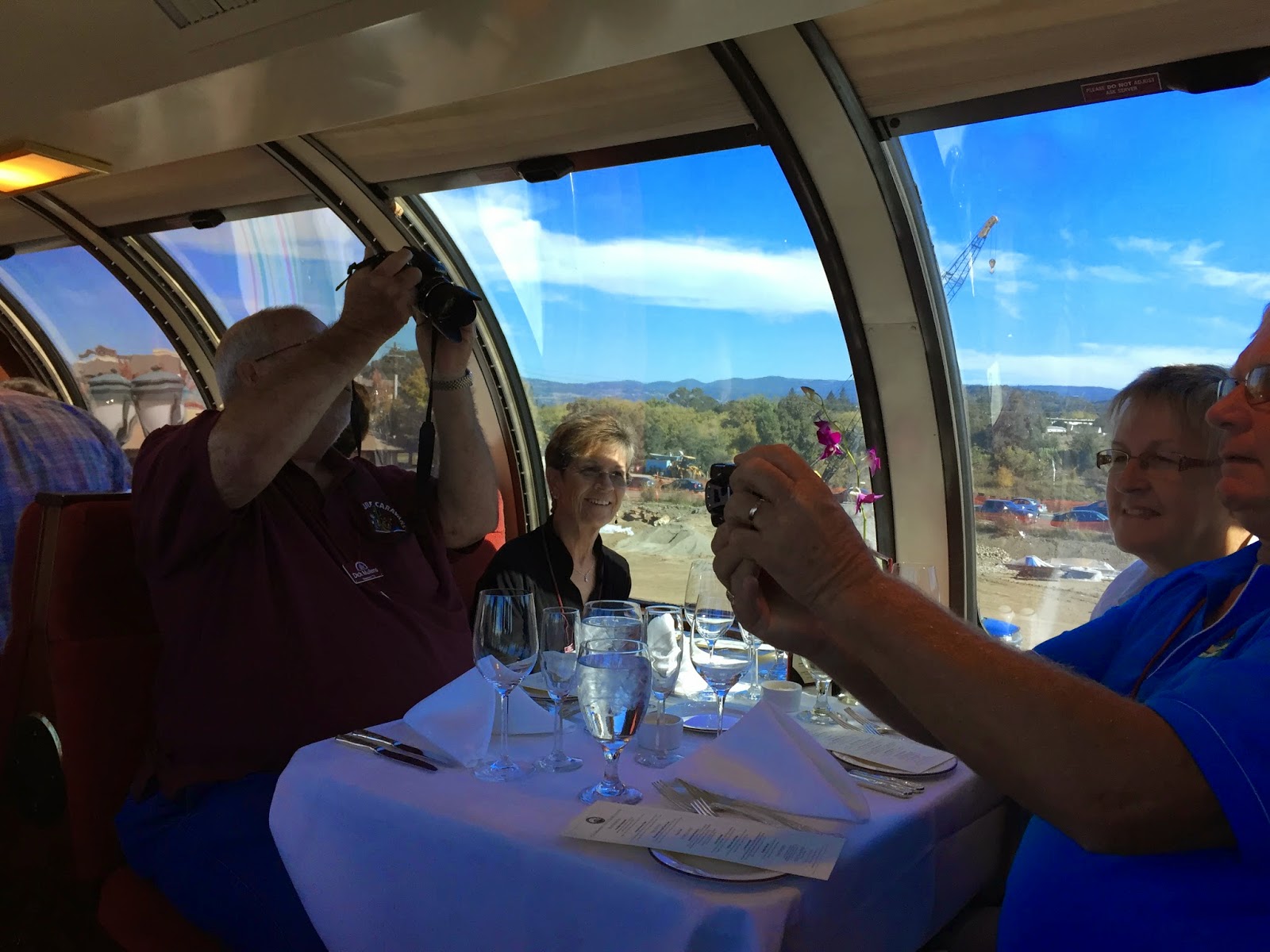 But that might be partially due to our free glass of bubbly,
provided by our excellent wait staff! 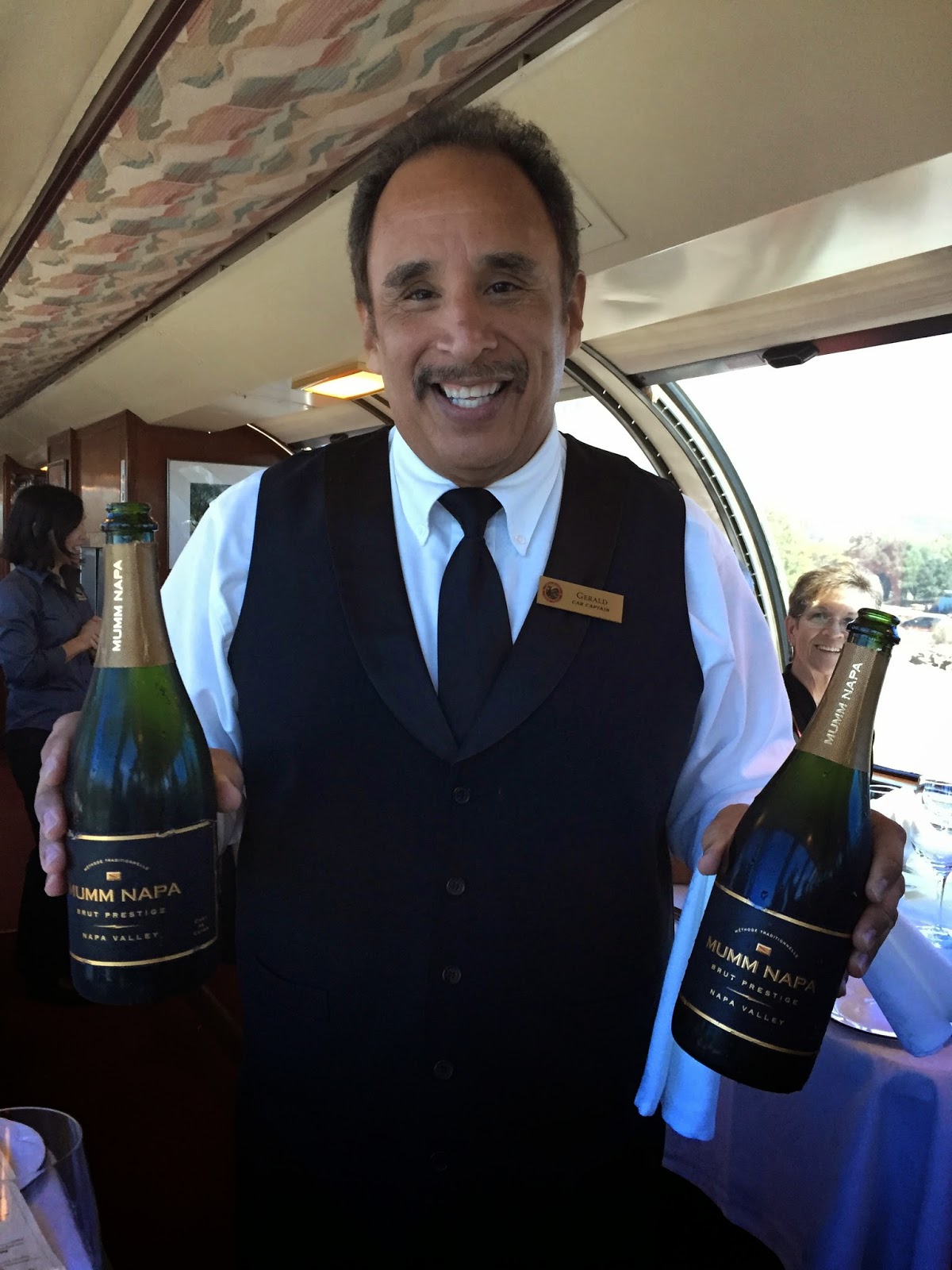 The food was outstanding... 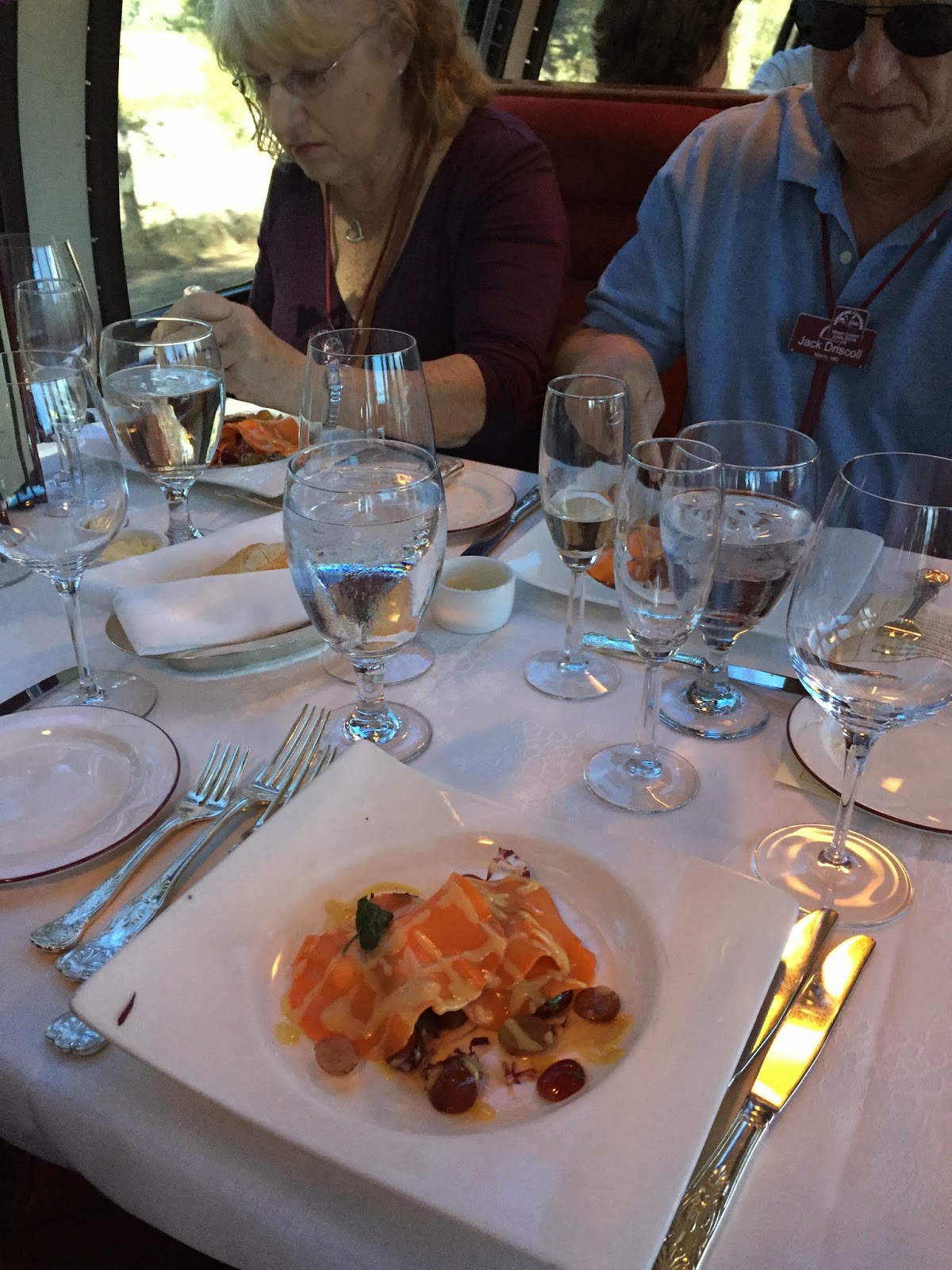 and we enjoyed the scenery as we traveled from Napa, CA to St. Helena, passing numerous vineyards along the way. One of the vineyards was the V. Sattui Winery. 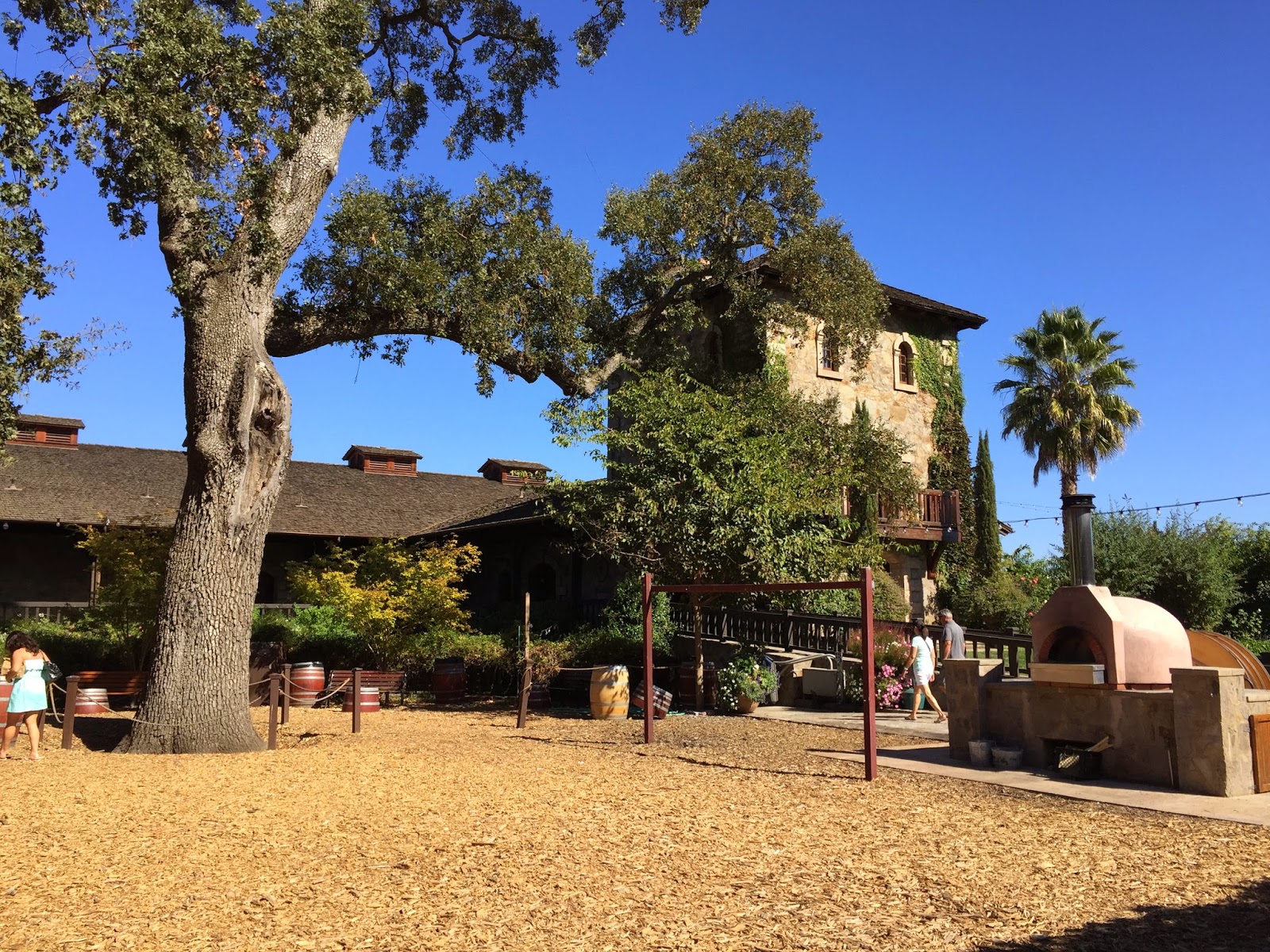 We Dreamers happened to stop there the day before. We were excited to point it out to our friends. This winery has a long history, but somewhat dissimilar to that of other wineries I've blogged about. Vittorio Sattui came from Italy in the late 1800's and worked as a baker. He made wine on the side. His wine was very popular and he soon devoted his time to wine making. However, prohibition brought an end to his business.
In the 1970's Vittorio's great grandson, Dario, began anew to bring the V. Sattui wines to life. He recalled village delicatessens in Europe and decided to incorporate a deli and gift shop as part of his winery experience near St. Helena, CA. We just happened upon the deli, near lunch time. To be honest, I was not exactly thrilled with the prospect of having lunch at a deli. But, oh, my! I was so wrong! This place is Dreamy! The counter was mobbed. Which, in hindsight, was a good thing. It gave us time to decide what we were going to order. We had to decide between salads, paninis, stuffed things and breaded things, and a huge selection of cheeses and crackers. 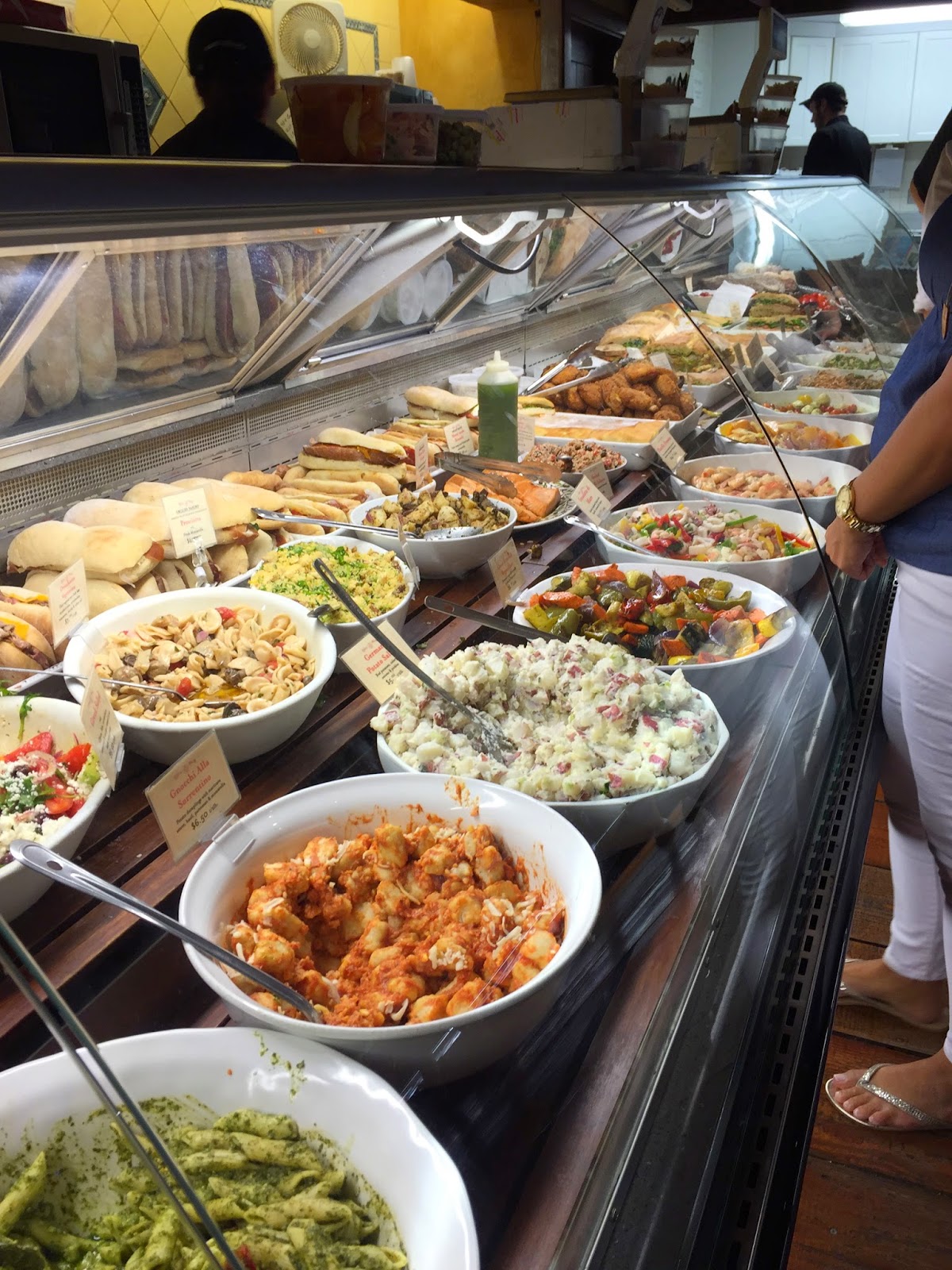 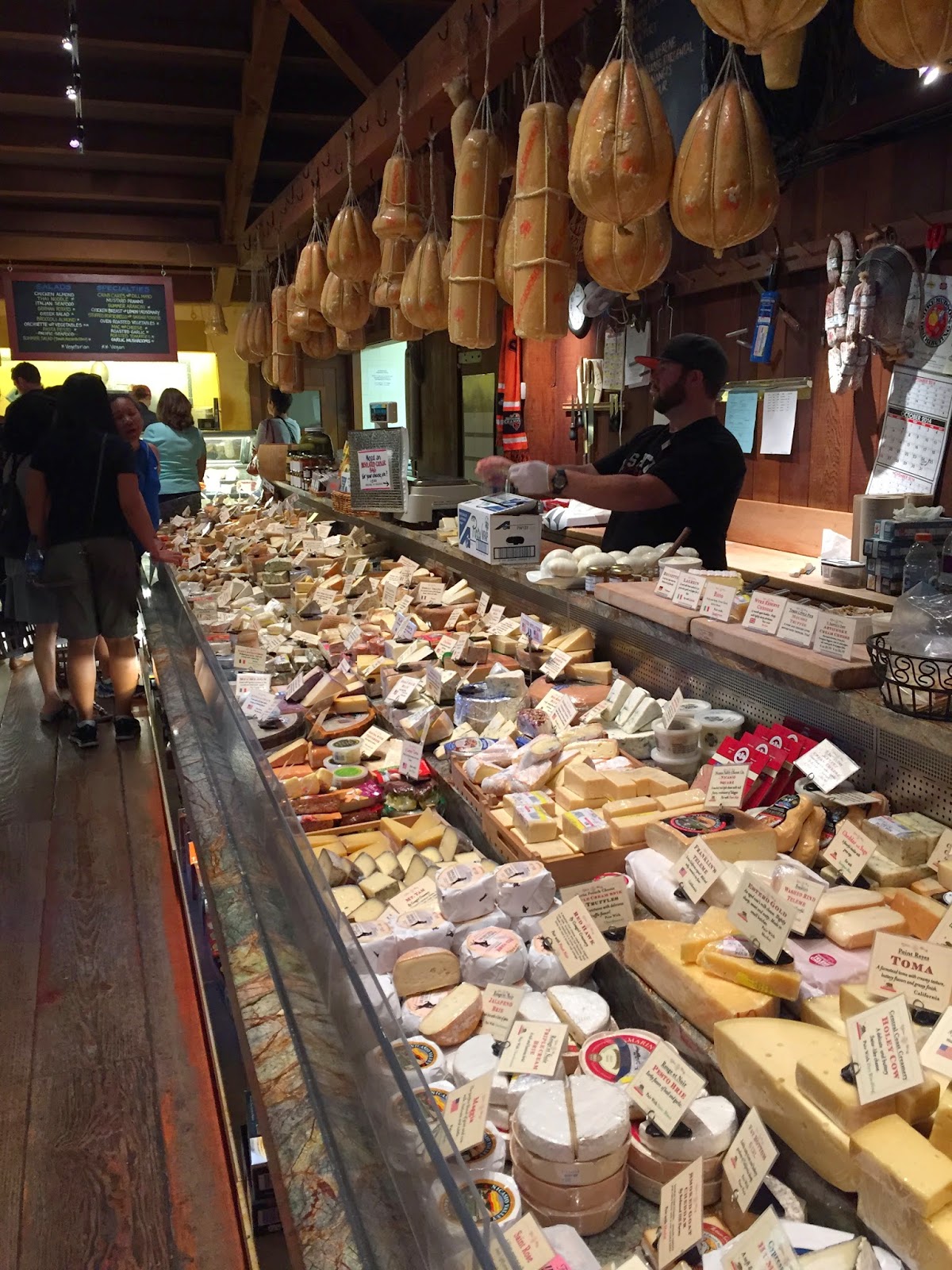 We took our order outside and ate at one of the picnic tables found under the trees on the grounds. Mr. Dreamy enjoyed a panini and German potato salad and I had a portabella mushroom stuffed with Italian sausage and cheese and beet salad. We shared the dreamiest crème brûlée I have had in a long time. 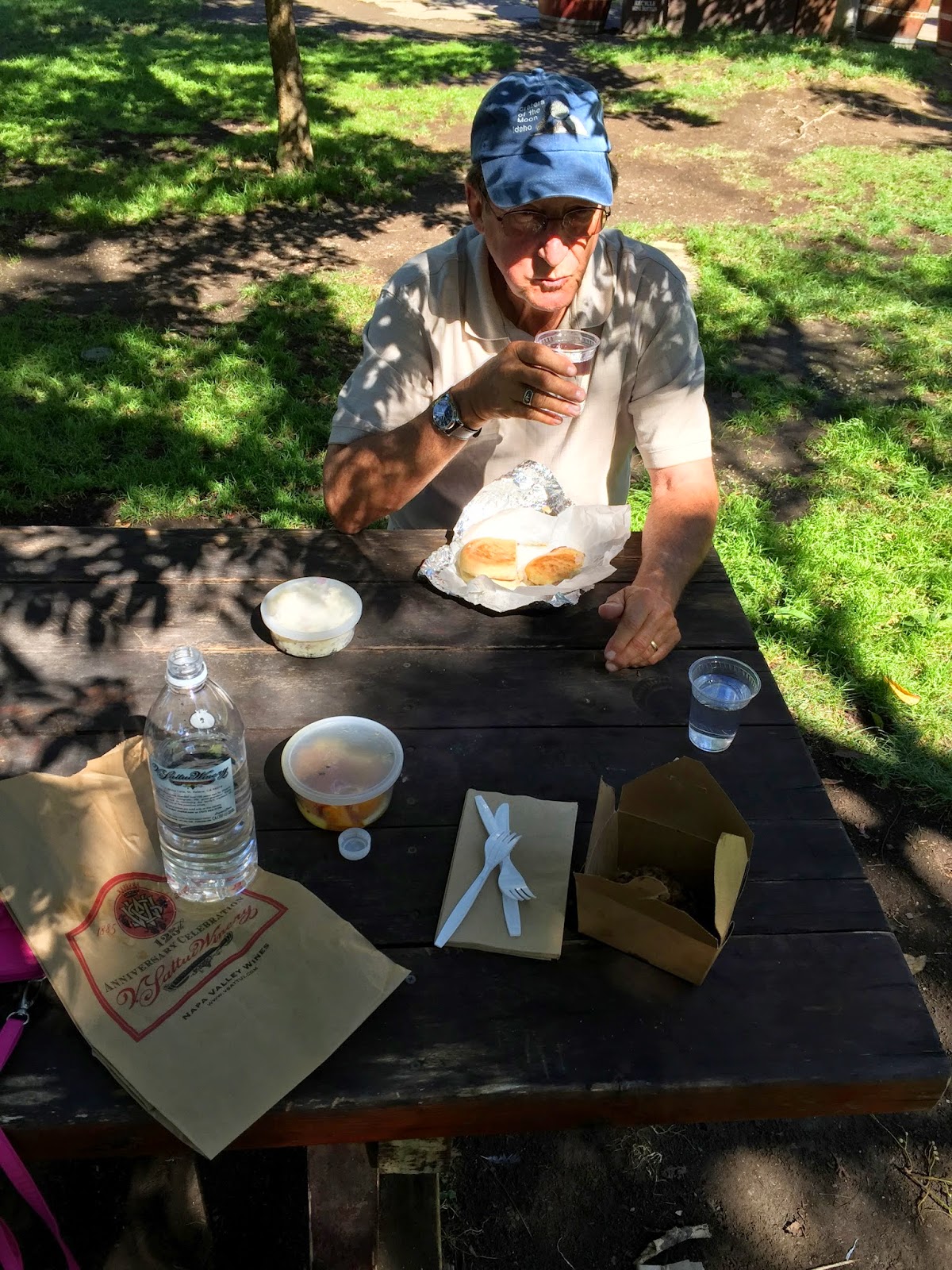 It was all good…. well, no, it was great! But, that beet salad was something else. I kept going back to it and eating one more bite. Mmmmm. I wanted to make this salad. I began trying to dissect it. Mr. Dreamy helped. The beets were easy. The chef had used golden beets, and they were beautiful. There was onion. There was something else crunchy… neither of us could decide just what it was. There were some bits of green. The dressing had vinegar…. I couldn't stand it. I marched back into the deli. The lunch crush was over. I asked one of the serving gals about just what was in the salad. She beckoned to a guy standing nearby. He was wearing an unassuming Tshirt and looked like one of the tourists. She introduced me to their Italian chef, Gerardo Sainato! Gerardo shared the basics of his recipe; golden beets, red onion, fennel, and a vinaigrette made with white balsamic (or he said 5% white wine vinegar could be substituted) and canola oil (olive oil is too heavy in taste). He also adds some fresh tarragon. Yum!
A few nights later I prepared the salad for our group, using the last of the beets I had yanked from our garden the day we left on our trip. I roasted the beets in foil on our grill until they were tender, then added the rest of the ingredients. The salad received raves. The funniest comment though, came from Mercedes. She collared me and exclaimed, "You MADE me eat beets! I don't like beets. They taste like dirt. But, everyone said I had to try your salad… and you made me eat them. It was pretty good… although I think I could still taste a bit of dirt!"
If you are ever near St. Helena, CA, plan to be there around lunch. You won't believe it!