The saga continues...
But maybe we are nearing the end!

As you may recall, I had a large-needle biopsy two weeks before our dream trip to Europe. Sadly, the results were inconclusive. After all of that aggravation we knew nothing more; All we knew was that Dreaming was slowly turning to stone. I would have to head back to the surgeon.... but. not. yet!

First things, first... we are going on our trip!
After all, we had planned this trip for over 2 years!

Medically, the trip was not without adventure. As our trip progressed the site of my biopsy (my left armpit) became increasingly swollen with growing tenderness (can also be translated as 'pain').
Perhaps, I am thinking, hauling a 42.4 pound suitcase may not have been advisable...ya think?!

On the third day of our trip I made a detour to a pharmacy.

Another European adventure! Thankfully, most of the working folks in Europe speak English. With some faltering and sign language, I was able to communicate my need for some sort of anti-inflammatory pain medication. 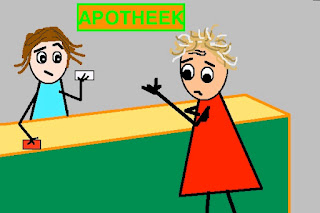 I selected an over-the-counter-in-Europe medication I had taken by prescription years ago for back pain. It worked then, and it worked on our trip. I was able to enjoy myself and my discomfort was held at bay by the meds.

I figure that what caused all of this was some bleeding deep in the tissue where the biopsies had been taken. The blood navigated along the canal left by the biopsy needle, and pooled in one area, causing a large, painful hematoma. By the time we arrived in Switzerland, the lump began to harden, and day by day it became a bit smaller and less painful. Here is my drawing... oh, I'm lying down holding my arm up in the air, in case you couldn't figure out the orientation!
I'm sorry, I just had to include this. I love this sort of thing - I find it all very intriguing! 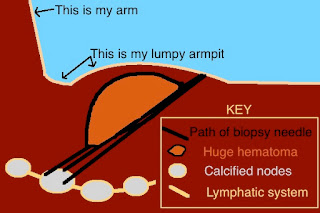 While all of this was happening in Europe I received notification that I had a message on my cell phone from my surgeon.  I couldn't  wouldn't pick up the message as I had turned data off, and I didn't want to incur out-of-line data expenses while overseas. We communicated via email and an appointment was made for Monday.

On Monday, my surgeon, a delightful young lady who wears heels in the office (so not surgeon of her), poked and prodded and announced we should get to the bottom of this with surgical excision of a few lymph nodes for further testing. And, while looking through her schedule, suggested why don't we do this on Tuesday? Wh..wh...what?!! Well, since I had brought a cold back from Europe as my souvenir, she then suggested Thursday. So, Thursday (yesterday) it was.

I went under the knife around noon. My surgeon discovered that my armpit was, in her words, 'a mess of scar tissue.' She dug around and took out some material she thought was lymph node, deciding to send it to pathology to be certain. She did find a lymph node - she actually took three. They have been sent off for culture. But, the good news is that a preliminary report from the pathologist indicates that we are not dealing with cancer (I hadn't been too worried about that as a diagnosis) and there was/is some sort of infection that was/is causing the calcification. I'll know more in one to two weeks - I guess that will be the last chapter - maybe? hopefully?!

So, here I sit, ensconced in my comfy chair; an ice compress under my arm, a drain coming out from the incision, which is glued together. I'll spare you pictures of my armpit... but I found this one on the Internet. The drain is very clever, well, perhaps since I've never had the need of one before, maybe that is why I find it so interesting! If you don't think this sort of thing is nifty, go ahead and close your eyes!

I have the TV remote and coffee on my right and my phone and other necessities on my left. I have one dog underfoot. Sweet little Gypsy has hardly left my side. Tucker...well, maybe it is just a 'girl' thing! He'd rather keep watch on the bunnies and deer. 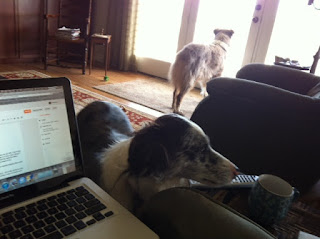 I took a dose of pain meds last night to ensure that I would sleep, but I haven't felt the need for them since. The post surgical pain is far less than what I experienced on our trip... at least so far!

Mr. Dreamy has been very attentive, and is only slightly miffed that I can't be outside helping him wash the motorhome for our next adventure!

And so, dear Blog readers, we have reached the denouement of this little story. All of the action is over and we await the pathologist's report as the conclusion of my saga... at least that's what we think(hope) now!
at June 07, 2013