A week on a river boat,
traveling from Amsterdam to Basel, Switzerland.
How heavenly!
Right?!
But, when we arrived in Amsterdam, the skies were grey.
The temperatures were unseasonably cool.
It rained. 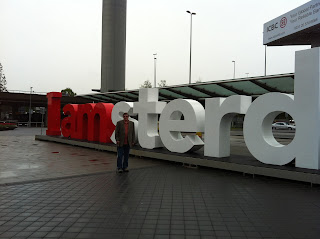 When we left Amsterdam it rained. It was cold. In each city and town that we visited we heard, over and over again, how terribly cold it was. How terribly rainy it was. How they wished spring would come. 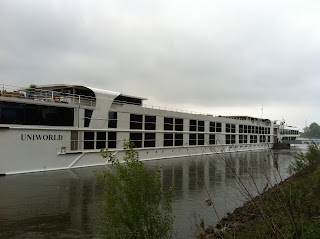 Mr. Dreamy and I used our umbrellas more in one week than we have used them in a year! One of our guides commented that he hoped spring would arrive on a Saturday so more people could enjoy it! (We had been saying the same thing at home a few weeks before - I found it interesting that the joke is universal!) Although we never were soaked by rain during any of our tours, it dripped now and then and the rain came down in buckets at convenient times; when we were in a building or on the boat.

The Rhine River was raging. In the beginning, we didn't realize anything was different than normal. Then we began to see that the water was high.  In some areas ramps or steps were under water. In other areas we could see that trees along the river's edge were in the water. Some navigation signs were on their way to being submerged.

The current was awesome to watch. Here you can see the muddy waters of the Rhine and the Mosel Rivers taken from a tram above Koblenz, Germany. Our river boat is on the upper left. 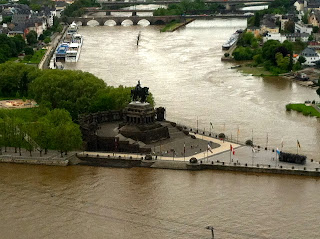 At one point the ship's Captain explained that he had to take on extra water to drop the ship 30 cm in the water so we could navigate under some bridges that evening. 30 cm?! That's a lot! That is almost 12 inches!

This is another river boat that has taken on water to lower the decks. The waterline is below the water. The windows on the lowest deck (do you call them portholes when they aren't round?) near the back of the ship, are only inches from the water. 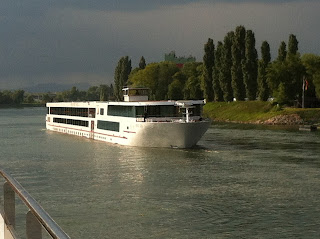 Most of the river boats can lower items on their top deck to help them navigate under bridges. This boat, tied up next to our ship,  could even lay the railings down flat. The wheelhouse also moves up and down by hydraulics. 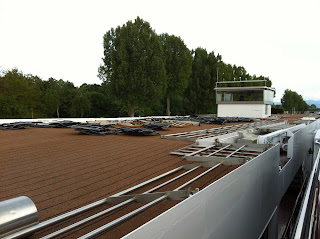 Our captain showed us the large skylight in the wheelhouse he can open in the event he has to lower the wheelhouse so much that he can't stand up. I supposed he could stick his head out to navigate as he maneuvered the ship under a low bridge! 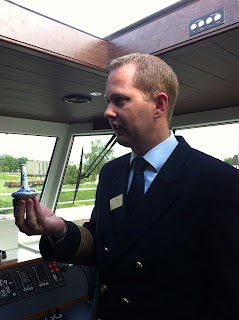 Here he is showing us a Delft china tear bottle. He explained the legend that ship captains' wives collected their tears in the bottles and gave them to their husbands before they left for sea. Our captain's bottle was dry, since his wife is also employed by the company and she travels with him most weeks!

On our next to last evening we were told we would have a special address by the Captain. That was unusual. He explained that we would not be leaving the dock and heading upriver to Basel. There was a bridge along the way that he wasn't sure we could navigate under. Our river boat was a 'super ship'. It is a little taller than some of the other styles. We would spend the night in Breisach, Germany and our transfers to airports, train stations and other locations would take only slightly longer from this location. He also suggested that staying in Breisach wasn't such a bad thing. First, most of our travel up the Rhine from that point on would be through a canal with concrete sides; not very scenic. Secondly, most of that route would have occurred at night, when we couldn't see anything anyway. And, thirdly, staying in Breisach would allow us to have a longer visit in the Alsatian villages of Kayserberg and Riquewihr.

I wasn't upset about our circumstances. Our trip had been very interesting. The food and service had been wonderful. Yes, it would have been ideal with spring-like weather.... but it was still excellent, and something I'd love to do again, given the opportunity.

We recently heard that the Rhine river was closed to all traffic from Koblentz to the south due to the high waters. Oh, my! Then, I read in USA Today that the major riverboat cruise lines are canceling upcoming trips along the Danube due to flooding. How awful! When I think about how long ago we planned our trip, and how much we were looking forward to it, I can't imagine the disappointment of learning that the cruise wouldn't happen. Were we lucky, or what?

Although the rising waters may have had an impact on river travel, I am thinking there is one segment of the population that doesn't mind....


Stately swans along the Rhine 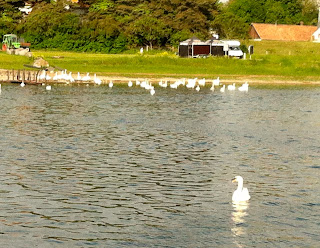 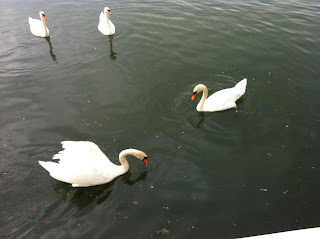 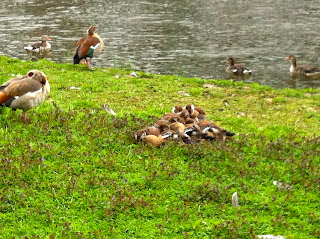 We were intrigued with the pile of goslings,
snuggled together to keep warm. 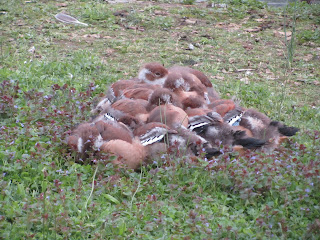 We could only guess at how many were there. 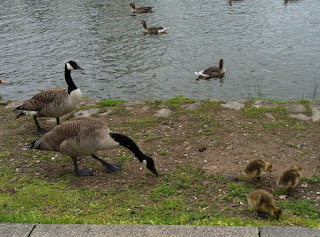 Despite the water woes Europe is experiencing,

There are still some Lucky ducks!