We arrived in Amsterdam on a rainy day. The rain remained throughout our stay. I am sure the canal houses would have looked even prettier in the sunshine, but regardless, they were very intriguing. 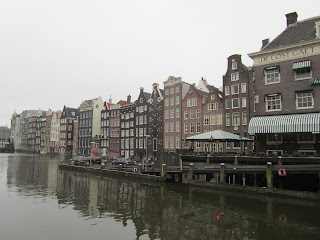 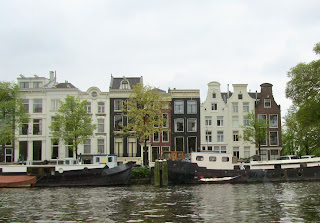 The canal houses are typified by striking gables with hooks at the top to hoist goods and furniture to upper floors, since the stairways inside are narrow, steep and twisted. Historically,  many of the buildings housed a business on the ground floor and residences on the top. Goods were often stored above the first floor to keep them dry in the event of rising waters. 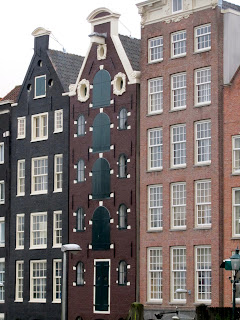 Property was very expensive, so most canal houses are very narrow.  Only the wealthiest could afford a double wide home.

The building below was probably constructed later than many of the houses, and was not directly on a canal. It was for sale. Do you see the men on the balcony? They have glasses in hand. I wonder if they are sealing a deal with a toast? And, what about the fellow in the upper window? A ghost of some long-ago merchant or well-to-do sailor? Just think of the stories we could create! 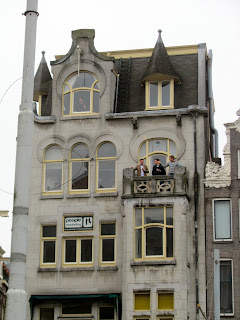 It was difficult to walk around the city without tripping or running into someone. My eyes were always on the buildings and their interesting facades. The details are fascinating. It would be nice to know the meaning behind the embellishments on the homes. 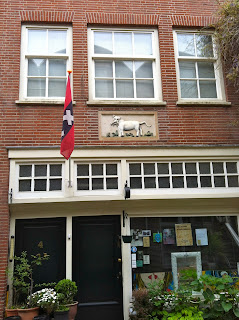 Remember the pilings I mentioned? The ones that hold the homes up and are 'basically' sound? Sometimes those timbers shift, or the area above the mud begins to rot. Then, the buildings begin to list to the side. It may not show as well in this picture as it did from the street, but this corner home was definitely leaning to the right, and the homes on the right are leaning into the street on the left. 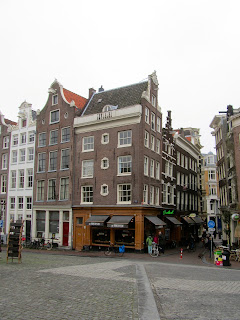 Here they seem to be making an attempt to stabilize a house by bolting large timber frames to the home, 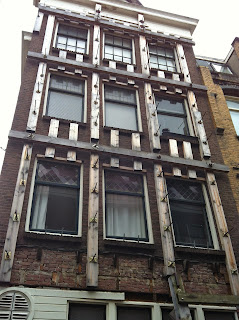 and shoring it all up from the street level. Mr. Dreamy is checking it all out, while my brother, in the lower left, seems to be leaving in case the building decides to give in to gravity. 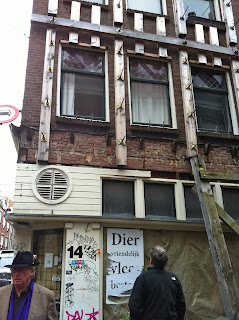 But, the best little canal house in town was the B & B we called home for a few days. This darling little house was constructed in 1617, hence the name, Sunhead of 1617. (Do you see the sun head medallion on it?) The house is exactly 4 meters and 20 centimeters wide, and 20 meters deep. So that you don't have to struggle doing the conversion, the building is 13 ft, 9 inches wide by 65 feet deep - I do wish that we would convert to the metric system. Yes, it would be a challenge at first, but once we got used to it, things would be so much easier. But, I digress... 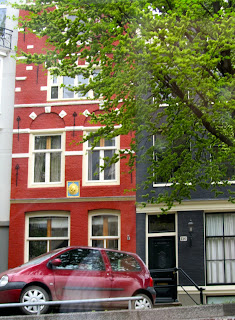 The proprietors have shoehorned 4 bedrooms and baths on the top two floors, and the entry, a kitchen, dining area and a storage area in the area just below street level. The second floor has a living room/office for the owners. Guests are invited to relax there while waiting, if there is an overflow crowd for breakfast. And, if you factor in the size of this dining area with the scrumptious food served in several courses, as well as the witty stories Carlos (one of the owners) shares, it is easy to see how a delay in being seated can occur! 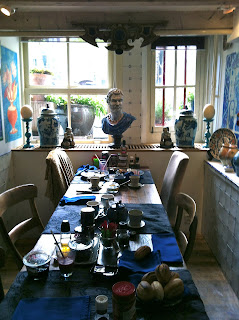 Before acquiring the B & B in 1994, Carlos owned a restaurant. He employs those skills every morning creating sumptuous feasts with local ingredients. We were greeted with coffee or tea, a freshly made smoothie and yummy European breads. Carlos has a spread of spreads. It was difficult for me to practice self-control in not tasting each and every one of them! Just as I was thinking that I had enjoyed a great breakfast, Carlos would then put a plate of eggs, usually cooked with some other delectable ingredients (like the teeny, tiny mushrooms he included one morning) or a tartine and salad. Oh, man! D-E-L-I-C-I-O-U-S! But - we are not finished! Oh, no! Breakfast wouldn't be complete without fruit. Carlos served a compote of fresh berries to finish the repast. He added some sort of liqueur to sweeten the mix and would offer cream on top. 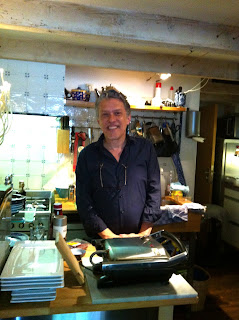 This is Carlos.
I think he is a "Kitchen Magician"!

Here are more pictures....
Those I didn't think to take, but found posted on the Internet.

Entryway and foyer
(always with fresh flowers from the market)

Our room, under the eaves...
This picture really doesn't do it justice.  It is a warm yellow,
even the timbers have a yellow wash on them.
There are charming elements of decor throughout.

And, saving the best for last...
the stairs, right outside our door!

Getting our suitcase up and then down was a challenge.
We joked that one wouldn't want to have too much
to drink before climbing the stairs to bed!

I loved staying in such a beautiful, historic residence in the heart of the canal district in Amsterdam. Living in America, it is so hard to conceive of a building being that old! Just think of the stories the walls could tell us, if they could talk!

Email ThisBlogThis!Share to TwitterShare to FacebookShare to Pinterest
Labels: Amsterdam, B & B, breakfast, Europe, Sunhead