The news has been terrible. The prospects for getting any containment on the fire today are slim as we are expecting more hot, dry, windy conditions. The boundaries for evacuation areas are shown below. Red is mandatory evacuation, yellow is a pre-evacuation zone and green is voluntary evacuation. 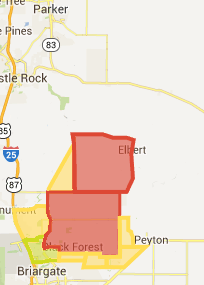 This is scary stuff.

Several of my blogging friends live nearby. Once Upon an Equine lives in my former neighborhood and has evacuated. Her horses are at the fairgrounds and she is at a hotel with her dogs and birds. Moondance Ranch is just north of the mandatory evacuation area. She has trailers hitched and ready to move at a moment's notice. I live in Parker which is shown on the upper left side of the map. We are about 20 miles from the evacuation area. (The evacuation area extends about 20 miles from north to south).
There are so many friends and families who have been impacted by the fire. Over 38,000 families have evacuated the 85 square mile evacuation area.  360 homes have burned to the ground and another 14 were partially damaged. Hard to believe since most of the homes are on lots that are 2-5 acres or larger. There are very few areas where homes are concentrated.
We have taken in another three horses, two families and three dogs, and will soon get another two horses. Oh... I forgot that we also have a visiting gecko! 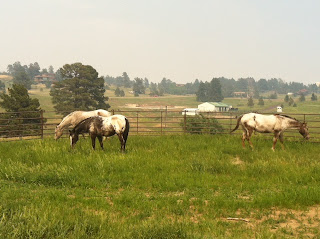 The smoke is very thick at our house - it is hard to believe that the smoke can be that thick, that far from the fire. 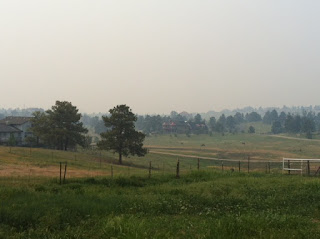 People are opening their hearts and their homes. This is a terrible time for all. The Sheriff at the Elbert County Fairground, where evacuated animals are welcomed, reported last night:
"Elbert County Fairgrounds remains open with space for evacuees and animals. Total count of animals currently at the Fairgrounds is as follows: 28 chickens; 216 horses, 5 drafts/14 foals; 5 cows, 2 calves; 27 Alpacas; 14 dogs; 25 cats; 22 goats; 1 duck; 4 burros; 2 guinea pigs; 3 sheep; 19 miniature horses; 19 mules; 8 lamas; 3 stallions; 1 yak."


We have firemen and police from agencies around the state, as well as help from the military. The fire has become a Type 1 incident, which means it will be under the command of a specialist in fighting large fires. The commander was in charge of the Waldo Canyon fire in Colorado last year. Everyone seems to be doing their part. Now we just pray that the wind dies down and the firefighters can hold the line. At this time my former neighborhood is still safe. The development is on the prairie, not in the forest, so that is a huge help. However, the homes are within 3000 feet of a wooded area that reportedly is a hot spot.

The local newspaper has been posting frequent "live" updates at http://gazette.com