We enjoyed a brief visit in Basel, Switzerland. And, the sun actually came out! My sister-in-law grew up near Basel and went to college there before traveling to the US. So, we had a wonderful tour guide.

Basel is in the canton of Basel-Landschaft. The symbol on the left, a stylized Bishop's crook, is the symbol for the city and is incorporated in the Coat of Arms for Basel. The reflected symbol stands for the surrounding countryside, with bumps, or sometimes dots, for the seven communities that comprise Basel-Landschaft.

The symbols can be seen throughout the city and countryside.

Another symbol of Basel is the Basilisk, sometimes called a cockatrice - a mythical beast that is half reptile and half bird, having the wings of a dragon and the beak of a cockerel. 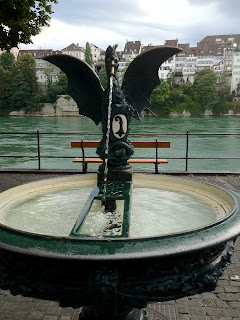 The cathedral in Basel is unique in that it was constructed from red sandstone, beginning in the early 11th century. 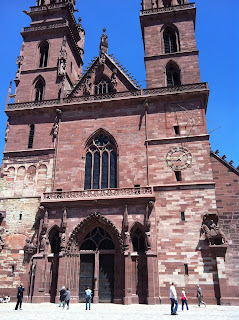 The Cathedral dominates the skyline, along the Rhine River, and it has a beautifully patterned tile roof, ...fabulous details,
here is Saint Georg (or is it Saint Martin?) knights
after which the towers of the Cathedral are named, 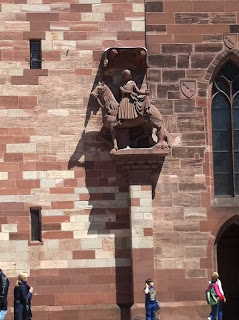 ...and sundials!
The Cathedral has both a mechanical clock and sundials-
the sundials seem to be accurate during "summer" time
(the same as our daylight savings time)
but historically, up until 400 years ago, Basel time was one hour different
than that of surrounding towns.
(both time pieces can be seen in my first picture of the cathedral)

The Rhine River rushes by below the Cathedral.
A ferry powered by the current
carries passengers back and forth
for only 1.5 Swiss Francs.
Yes, we enjoyed our ferry ride! 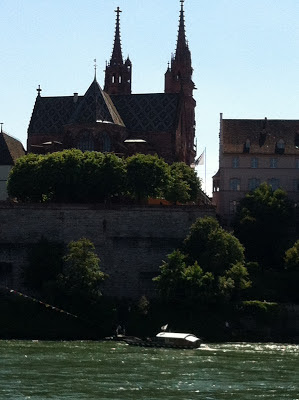 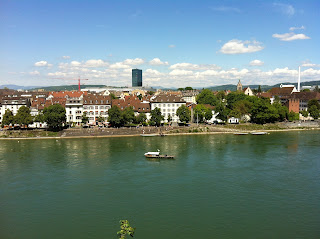 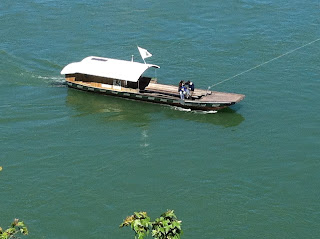 Basel has many cute, small streets with wonderful old buildings... 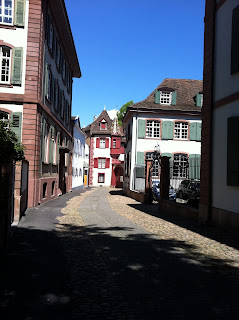 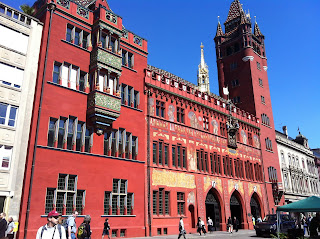 But, one of my favorite buildings,
which we saw in several places throughout the city,
was this...
I think it is self-explanatory! 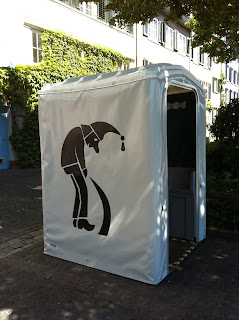