Life in the Commune

We are settling into a life with three families in the house. The dogs have all learned to get along, with only a few tifs between Gypsy and Revel, a Vizsla who thinks he should be in charge! The gecko acquired a larger home as she was evacuated in a small carrier. When everyone evacuated, we all figured it would be for a day or two. Now our friends are realizing they need this.... or that.... or forgot to bring something or another with them.
The horses seem quite content. The pair of horses I first picked up are named Andy and Star. The horses that arrived on Wednesday are named Fancy, Andy and Star. What are the chances of having four horses that share the same two names?!
The update on the fire this morning was quite upbeat. The firemen were able to establish a few lines and hold them during the night. All of the active fires were within the areas that had experienced fire previously. There were no fires outside of the original burn.
The burned area looks like this: 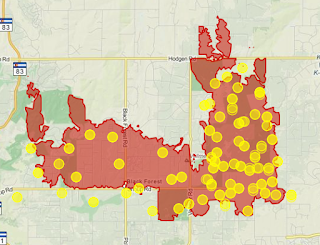 The yellow dots show hot spots detected by satellite. I believe that the yellow spots outside of the red area are not actually fires, based on the reports we have received. My friends live just to the left of the northern-most "bunny ears".
Thank you for all of your kind thoughts and good wishes.