Tecknic: Planes, Trains and Automobiles.... and so much more!

Now we'll go back to Europe... for real! Well, I'm not going back, but I still have some posts I prepared about our European trip in May....

Mr. Dreamy and I stopped by the Technic Museum in Speyer, Germany, one rainy afternoon on our recent European trip. Wow! We were wishing we had more time to explore. This museum was HUGE. It had everything a guy (and even this girl) could love. And we just scratched the surface!

Our attention was snagged when the bus drove by the museum earlier in the morning when we saw this:

(All photos that appear to be taken on a sunny day are courtesy of the Technic Museum!)

Visitors can climb up to tour the air ship, which is a mere 65 feet above the ground. Those who are adventurous may slide down an enclosed spiral slide all the way to the ground. Dreaming was not feeling adventurous. That may have been partially due to the torrential rain which made it difficult to look up at the beast, let alone think about climbing stairs! 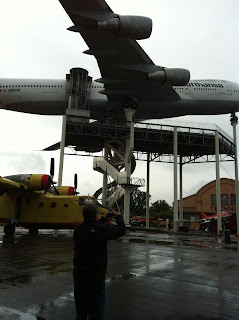 The Boeing 747 jumbo jet was one of about a 4 dozen aircraft open to visitors - many displayed above ground, as if in flight. Some inside... 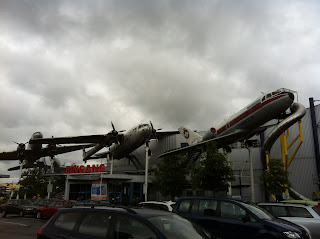 Then, there were the trains. Again, some were inside huge buildings,

others were outside.
Due to the rain we did not tarry at the outdoor exhibits.

One of the trains on display made steam engine noises while the pistons appeared to move the wheels. I was very impressed with many of the interactive displays.

The museum has many vintage cars. Dreaming was not particularly happy at seeing her first car featured in a 'vintage' display! 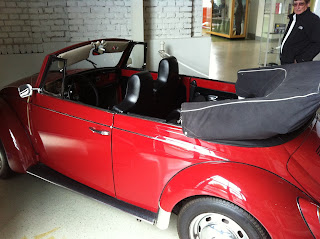 It also has one of the largest selections of fire engines. What little (or big) boy wouldn't find it fun to see all of this equipment!

Although these look like tin toys, they are full-size.
They are the 'real deal'!

Visitors could go onto and into the ships.
We toured this submarine and a Coast Guard-type rescue ship.

The museum had big boy toys, 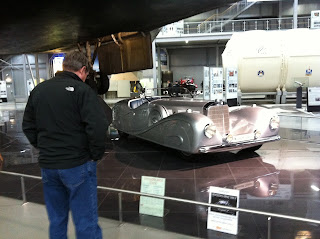 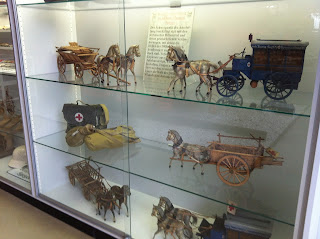 Oh, and speaking of little boys... I was tickled when I saw an adventure unfolding. I tried not to be too obvious in taking pictures. So, I only took a few, from a distance. It seems that Dad had the boys for the day. They were all very young. The youngest, perhaps a three-year old, delightfully walked through the exit turnstile leaving the museum grounds. He was very proud of his accomplishment. Dad was not sure what to do. He couldn't go through and leave his other two boys. The entrance was quite a distance away. If he went through with the other boys, would they allow him back into the museum? I don't understand a lick of German, but I suspect from the tone of voice that he used some choice words! 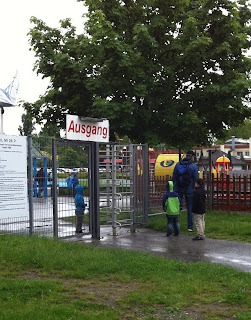 Dad looked left and right. Tested the bars of the turnstile. They only turned one way. Then, he encouraged his young son to climb the bars. 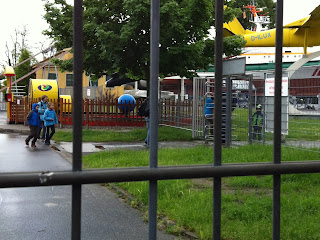 Another family, seeing the adventure unfold, came to his aid, helping the little boy over the turnstile. 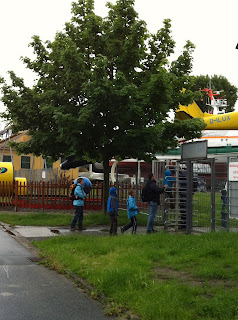 We've all been in sticky situations before!
How nice for someone to come help this family.

The museum also had a large selection of large 'Musical Organs'. Some were like those you'd find on this carousel:

Others were like this animated musical organ that might have been seen at a fair in the early 1900's.

The museum has left the back of this particular 'organ' open so that visitors can see the mechanics. Dreaming apologizes for not taking a picture!

This museum is really out of this world. Oh, and yes... it has displays about space travel and Russian and American launches. The prototype for Russia's equivalent to the Space Shuttle is on display. The Buran prototype was used to test launch, gliding, reentry and landing before the real Buran was launched in 1988.

We only had a few hours to spend at the museum. I think we could have spent at least a week there. The extent of the collections was almost beyond belief!