The Trouble With Smart Dogs

Many years ago, hubby and I bought a male Golden Retriever we named Brew. 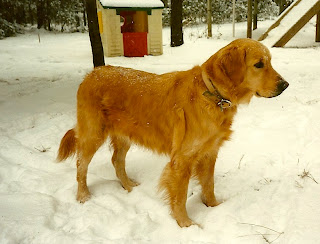 We had planned to show Brew to get a championship title, like his parents. But, Brew who acquired his name by being a 'big bruiser' grew too large for breed standards. So the next thought was getting an obedience title on him. Brew was an enthusiastic participant. We went through classes and practiced. We participated in a few fun matches. We were entertainment for the viewers! On a recall, where your dog sits about 30 feet away and is to come straight to you when called, Brew would charge toward me, plunk his rear on the ground about 8 feet away, and slide to a stop - usually taking me out in the process! Well, he was obedient! In the Novice class, on the long down, your dog is to remain in a down position for three minutes (the longest three minutes ever) while you stand about 30 feet away. Observers could see that Brew was a thinking sort of dog. He would look at me. He would look at another dog, or another handler, or the judge. He would look at me. You could see his mind working.
"Alright," he'd think, "she said to stay down. What if I stay down, but crawl on my belly over to that dog (handler, judge)? What's the worst she could do to me?!"
So, maybe obedience matches weren't his thing either!
Brew became a delightful family dog. He was good with the babies. He happily shared toys with them. He delighted in hanging around the high chair during meals. He didn't mind if the boys hung from his ears (or other appendages) in learning to walk.
At this time our neighbor had a Corgi cross. A cute little guy they named, "Bandit". The neighbors taught Bandit to fetch the newspaper. Brew, being a Golden Retriever, was born and bred to fetch. He began to steal the newspaper from Bandit and bring it home. Of course, since our driveway was quite long, I was thrilled to have my dog bring me the paper, not knowing how he had acquired it. I just assumed it was from the end of our driveway. I praised Brew for his enterprising action. The next day, Brew delivered the paper once again. And, I praised him again. There is nothing...nothing at all... that Goldens like better than praise! So, the following morning there were several newspapers. I believe I ignored this on the first morning, but on successive mornings we had an increasing number of doggie-delivered newspapers. I would surreptitiously drive through the neighborhood and redeliver papers on my way to work! I finally had to reprimand our Golden. Bad dog turned into sad dog. But.... it didn't stop his retrieving! It only stopped his delivery! My new morning routine began with a search under bushes to find Brew's pile of retrieved papers and then redelivery. We finally stopped Brew's paper habit by helping our neighbors install newspaper boxes the publisher provided for free. We even installed one at the end of our driveway, because Brew never learned to bring the paper back to us after we reprimanded him for his behavior. He always hid it in the yard!
at February 14, 2012