Return to the Scene of the...Clinic

Monday is my riding day with K.  We could not go out on the trails that are now covered in almost two feet of snow and possibly larger drifts. It's hard to believe that last week we rode in shirts... no jackets needed!
This week I decided we'd take the horses back to the scene of the clinic. We loaded the horses and took them to the indoor arena about 15 miles from the house. Everything was clear, except their parking lot... but the truck handled the slick, packed snow, even with the chunky guys in tow. (And what the heck, if we'd gotten stuck, I could have put the guys to work hauling their own tow vehicle out!) 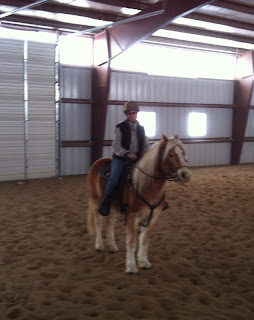 Dreaming on Pippin
We each had an opportunity to ride both horses. It was great fun to see someone else on my guys! It was even greater fun to see how Pippin has already responded to new things I learned in the clinic! Wow! He was a different horse altogether! Of course, we can attribute at least some of the change to this being a repeat visit to the arena. Also, it was just Pippin and Doc in the arena, not 9 or 10 horses, and since Doc was with us, he wasn't neighing plaintively outside the arena as he did during the clinic. But, there was no getting around it... Pippin was listening to me and he is learning! 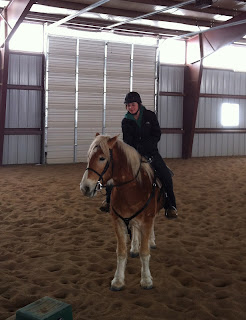 K on Doc
During the clinic Brent worked with us on communicating changes in speed with our bodies. He asked us to work on transitions and if the horse doesn't get the hint by using our seat, then we should ask them by using verbal commands and if necessary, we can tell them by using legs for impulsion and reins for slowing or stopping. After a few minutes of warming up Pippin and I went to work. The outcome.... I had a horse who easily moved from a halt to a walk. He would speed that up, or slow down. He performed nice, calm transitions to a trot and changed speeds at the trot. He slowed to a walk and halt.... without my having to use the reins! I was so excited.... I almost fell off!

Sure... we can still use a ton of work, but I'm so pleased with how Pippin listened and responded.
A good day was had by all!
at February 07, 2012