Please Prove You Are Not A Robot

OK, Blogger. I've just about had it with you! You have turned the corner, and I don't like the direction you are traveling! (If I addressed you that way, would you be scarified? Maybe the tiniest bit intimidated?)

Word verification was OK. Sometimes it was amusing to see what 'word' you would provide. Uncannily, sometimes those 'words' would somehow fit the post. They often put my imagination in gear as I would think of meanings for them.

But this new Word Verification $%!+ is driving me crazy! I thought it was a new setting that one of my blogger friends had selected when I responded yesterday. It took me four tries! But no, you have changed the format on all blogs that require word verification. I guess I just don't 'get it'!


Is it a sign of age that sometimes I can't 'see' the letters for the blob?
Oh and Blogger, why did you make the letters blurry?
I just paid good money to have new glasses made,
'Cause I don't like seeing things 'blurry'! Prove I'm not a robot? Do I look like a robot?
Do I sound like a robot?
If I were a robot I wouldn't have wrinkles,
I wouldn't have arthritis...
I wouldn't be typing this blog post!
Then I notice, when I don't get the letters correct,
I get a reprimand:
The characters you entered didn't match the word verification.
Please try again.
In red ink!
I feel like a school kid getting a paper back from my English teacher.
It's not a comforting feeling, Mr. Blogger.

And, by the way,
if you got a message from me that says absolutely nothing...
It's because when I do mistype the words,
the new form comes up...
without my comment!
So, dear Blog friends, if it seems that I am not responding to your posts, if you aren't seeing comments from me, it's not because I'm not reading your post. It's not because I'm not interested in saying, 'Howdy' or reacting to what you have written.... it's because Blogger has driven me over the edge and I refuse to play the game! 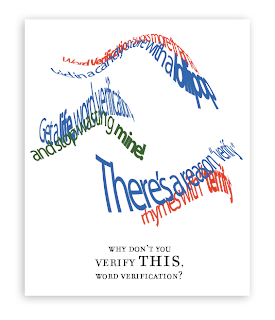 
You shouldn't have to play the game to comment on my Blog. I turned word verification off a long time ago. I discovered I didn't get that much spam... in fact, the Blogger spam filter seems to catch what little there is of it.
So, is it just me who is a wee bit irritated by having to go through some sort of intelligence (or lack thereof) test to comment on a friend's blog?
Am I the only one who is irritated by this?