Happy Friday. Guess what? I have been hanging around with my forever family for a whole entire year now. Wow! That's about 1/5 of my life. Sometimes it feels like I have been here my whole life, and at other times it seems like I just got here. Time is a funny thing - have ya noticed? 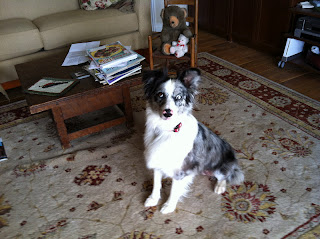 Anyway, when I came to my forever family, I weighed... oh, I am embarrassed to admit this... 47 pounds. On my delicate frame, that was a lot! I was a bit tubby around the middle. (Actually, when I was first picked up by the rescue peoples I weighed 51 pounds!) The rescue peoples starved me. It was some sort of collusion ‘cause they tole my forever family that I was fine with a bit under 1 cup of diet food mixed with green beans, twice a day. They said I liked diet food and green beans. What did they know?! Green beans, schmean beans!


My forever owners followed that routine, but they changed things up a bit. They tole me they were adding bulk to my food, so I would feel like I was getting more. Yeah, right! They used what they called an immersible blender to mash the beans into mush, and gave me some of that. Sometimes they gave me some spoonfuls of pumpkin with my diet food. They even added yogurt now and then.

Then, there was that other dog, that Tucker dog. What a pest! He’s hardly more than a pup and he bugged me. He wanted me to run. He wanted me to play. He nipped at me. He pushed me around. He herded me. I tried to herd him. Sometimes we fought I had to tell him who was boss. 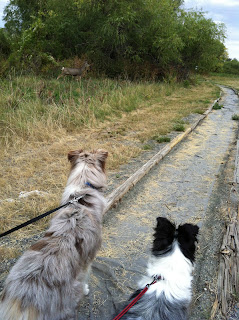 But ya wanna know something? I began to like racing through the yard. I began to like trying to beat him! In the beginning, just ‘bout all I could manage was a little jog, then I’d be outta breath, and pooped - not the really poop thing, the tired thing. Now... I can race the wind! I can beat that Tucker dog... and I do! I can take him down! 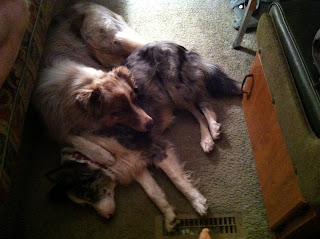 When I went to see that lady in the white coat in the place that smells awful a few weeks ago, she was really pleased. I weighed 38 pounds - or 41, depending on when the peoples read the scale. I was kinda having a hard time sitting still ‘cause I was kinda nervous ‘cause of all those awful smells. Anyway, that lady is my bestest buddy ‘cause she said I can’t lose any more weight. I am perfect! I always knew that... it just took the humans some time to figer it out! In fact, recently my forever feeders have been giving me a bit extra - I like that! They have stopped buying that diet food, too. Yay! I get some tasty stuff now.

Guess what? My forever owner is feeling fat now. She oughta take a lesson from what she did to me. Maybe I should limit her food to 1 cup, twice a day, with smooshed vege's, and see how she feels about that! Maybe I should start nipping her heels to make her move more! Ha, this could be fun! Tit for tat!


See what other dogs and their peoples say about staying fit at this blog hop. Click on any of the links below to read other blogs. The blog hop is hosted by slimdoggy.com, Peggy's Pet Place and To Dog With Love.