Everybody Loves a Parade

This morning I stepped out of the motorhome with Tucker and Gypsy for the first walk of the day. I could hear that the men were still cutting up the trees stacked near the campground (the community cuts hundreds of trees into firewood for the needy)... but it seemed they were having a lot of trouble with their chain saws. They kept starting. Stopping. Starting.
It sounded just like sheep ba-a-a-ing. Wait a minute.... I was hearing sheep! Lots of them. The sound I was hearing wasn't chain saws! The sheep were making their summer migration through McCall. How exciting! I watched hundreds of sheep moving along the road just up the hill from our camp site. A bit later, Mr. Dreamy and I became trackers, following the signs. When 2000 sheep go through, it isn't especially difficult to follow the trail! We determined where they were going, and went around to catch them from the front. For me, it was as exciting as a parade - so, yeah... I may be a bit strange! 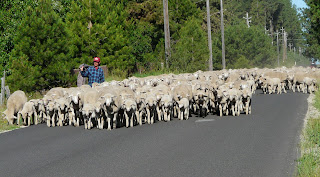 They surround our car... 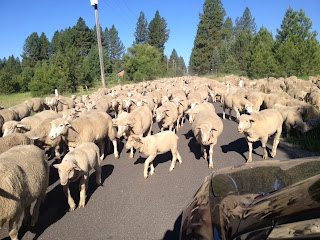 ... and grab a little snack here and there. 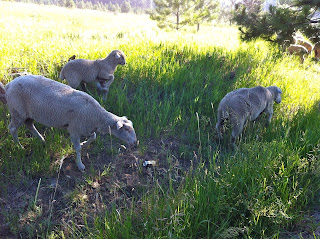 We are in a sea of sheep. 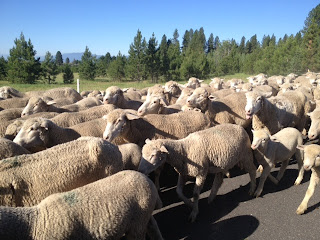 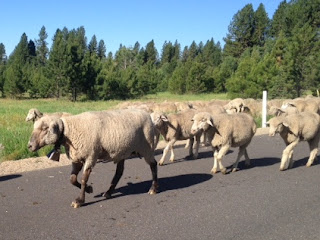 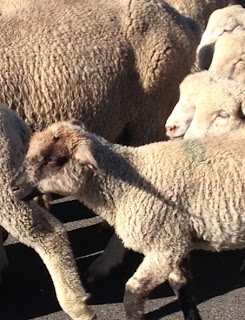 Three shepherds controlled the mob;
one who walked ahead to alert cars,
one near the front to get the sheep moving,
and one bringing up the rear.
Well, actually the guys doing the real work were the dogs;
we saw at least 4 Border Collies and 5 Great Pyrenees.
It was difficult to get an accurate count of the dogs.
One of the shepherds told us how many sheep they had,
minus three we saw in the back of a truck with a 4th shepherd.
The sheep are moved about 90 miles.
They will be driven back to their winter pasture in the fall. 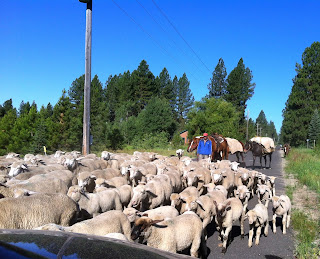 Several of the horses and mules just followed along. 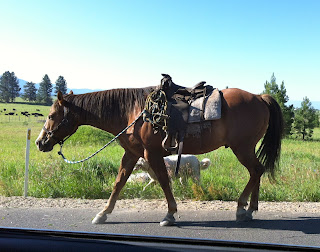 It was a wonderful way to start the day! 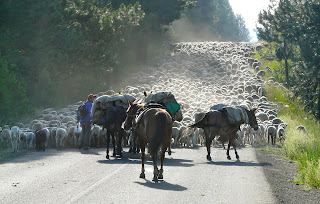