We visited the Black Pine Deer Farm last week. The farm raises European Fallow Deer. They are smaller than our Whitetail Deer.


Most of the deer have spotted coats, yet white and black
are also accepted colors. Although there were plenty of
fawns, half grown, most stayed far away and managed to
hide behind the does. The black deer in the middle is
one of this year's fawns. 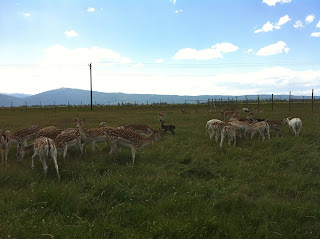 A few does were enticed to come closer with corn.
They were very leery about our being in their pasture.

The young bucks were a bit bolder about checking us out.
But, I think they also knew we were behind the fence.

The farm has three bucks used for breeding. They are cautious,
but are willing to come up and eat corn out of our hands. 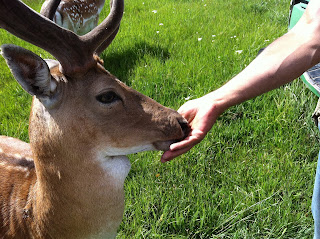 I think this fine looking guy is coyly showing us how handsome he is.
(Or, he might just be scratching his shoulder!) 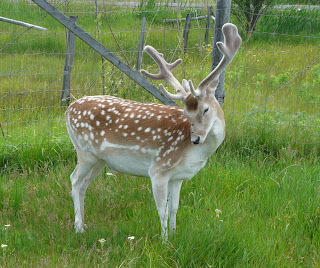 The antlers on the Fallow Deer become shovel-shaped
beginning the third year. When we visited, the antlers were
still in an active growth phase and were covered in 'velvet'.
And yes, they let us briefly touch them! 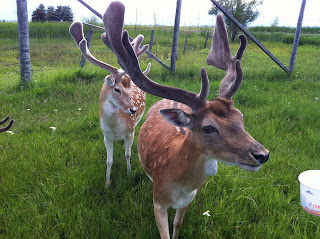 This year's fawns are half grown,
but the Farm's FaceBook page had this picture
of a newborn. Too cute!