We visited the Bonneville dam.
We had an excellent tour of the facility and
learned a lot about hydro-electricity.

It was impressive.
In addition to the dam,
visitors can watch boats go through the locks... 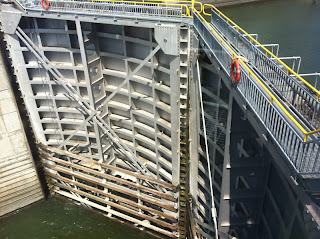 and get an underwater view of fish going up the fish ladder. 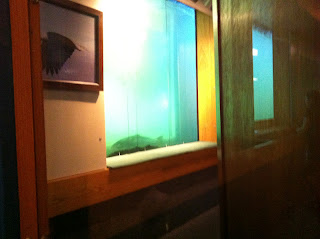 This was the only fish I  caught going up the ladder.
Do you see it? Along the bottom?

Most of the salmon have already gone upstream but we did see some Lampreys and some sort of trout. They actually have a person who works as a fish counter. For fifty minutes out of every hour a person keeps tab of what species of fish is going by the counting window, and  in what direction. Now I know the inspiration for Dr. Seuss' book: "One Fish, Two Fish, Red Fish, Blue Fish"!  This year they had a record run of Salmon, with over 515,000 going upstream this spring.

In case you didn't know, Salmon eggs are laid in gravel 'nests' in mountain streams. The eggs that aren't swept down stream or eaten, hatch and spend several weeks in their nest area growing bigger. They live in the mountain stream for 10 to 11 months and then head downstream to live in the ocean for 3-4 years. When they are ready to reproduce they head back to the exact stream where they were hatched. Dams and electric power plants have created obstacles for the fish - both going up and down stream. When dams are built, precautions are taken to try to shuttle most fish heading downstream away from the turbines, and fish ladders are constructed to provide a means for the fish to return from the ocean to the stream or hatchery where they began their lives.


Even as early as 1900 the US Government began to develop hatcheries to enhance fish populations. We have visited two hatcheries on our trip. With the Salmon, each hatchery collects the fish that have returned from their migration from the ocean. They 'milk' eggs from the females and sperm from the males. These are placed in thousands of incubator tanks until they hatch. The fry are then transferred to larger tanks and are moved successively to larger holding tanks or ponds.

We happened to be at one of the hatcheries when a State employee was there with equipment to mark the fingerlings. They cut off the adipose fin of each fish. This is a small fin located on the top of the fish, near the tail. It doesnt grow back and its removal doesn't impact the fish in any way. But, the hatchery-raised fish can easily be identified in the future. Apparently this fin removal can be done by humans weilding small, sharp scissors. But, there are trailers with equipment to mark and sort the fingerlings. Once the fin is removed the fish is released, swims through a tube and ends up back in a collection pond. It was fascinating to watch - even though it all happens in less than a blink of the eye.

I found the following video that shows the process in Washington. We weren't told about the wire marker... but the trailer and equipment were identical to what is shown in the video. It isn't normally part of the tour, so we were fortunate to be in the right place at the right time, and the fellow operating the equipment was kind enough and invited us inside to watch.

Dam (sic), I find this sort of thing to be so dam (sic) interesting!

I apologize about the pictures. I have been taking lots of pictures but the Internet at the campground is so slow it takes way too long to upload them. On the sign-in screen for using their wireless they also ask that you not do things that require a lot of bandwidth - so everyone can enjoy the web. Sometimes I am not so certain I 'enjoy' the experience - but I guess some Internet, at a snail's pace, is better than none!