My Consolation Prize - The Gambit

I couldn't seem to have babies. I had miscarriages instead. After my fourth miscarriage I was ready to give up on having children and I bought a horse. That was my consolation prize. A friend of mine was in a tough spot. She had acquired a young horse and had no place to keep him. At the time she was renting a small house and had the horse tied out in the back yard like a dog. He was not fed well. He was starving. My hubby (have I ever said how wonderfully supportive he is? And, how he sometimes goads me on?!) said to rescue the horse and give him (the horse!) a decent home. So, I forked over $200 and coaxed another friend to trailer the horse to her barn. My little horse walked right into her trailer. She worried that he wouldn't be able to handle the 30 mile trip to her barn. He was really in poor shape. We had to go up a steep hill to negotiate a bridge, and she was quite certain he would slip and fall in the trailer and not be able to get back up. He proved her wrong. 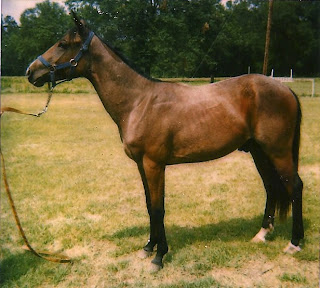 I had forgotten just how awful 'my horse'
looked when I first acquired him.
My little bay roan was a registered quarter horse. His papers declared him to be 'Two Eyed Tammet' (grandson of Two Eyed Jack). I called him Gambit. First step was to have him gelded. After sedating Gambit and gelding him, the vet cleaned his truck and went on to clean the vet box on each side of his truck. I later learned that he only does this when he is worried! Gambit wasn't metabolizing the anesthesia as he expected. He wasn't sure that my horse was going to get up again. Finally, my little guy raised his head and worked at getting his legs under him.

Over the next year I worked on training my horse. He had never been ridden before I purchased him. We did a lot of work; walk, trot and canter under saddle, and a little jumping. Gambit didn't particularly care for jumping! He didn't particularly care for going fast. "Whoa" was his favorite gate... not "go"! One time I participated in a western riding clinic. The clinician asked us to jog. He told me to pull Gambit back a bit. Yes! That's it! Gambit ambled on in a beautiful, Western pleasure horse jiggity- jig. Then we were asked to lope. Again, the clinician suggested that I pull Gambit back. Soon he was executing the perfect Western pleasure lope; cad-um, cad-um, cad-um. If he went any slower he'd fall over sideways! He was born to be a Western pleasure horse! 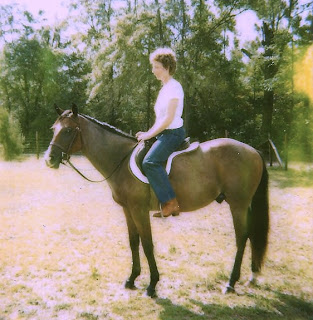 Gambit - one year later
After some medical intervention and refinement of my innards I became pregnant and carried the baby to term. I was the proud mama of a baby boy! Of course I can manage a baby and a horse! Why not?! Who wouldn't be able to?! I planned my rides around the baby's schedule. Shortly before his mid morning feeding I'd head to the barn. I would carry the playpen and the baby monitor and the diaper bag into my friend's house. Oh, and don't forget the baby! I'd nurse my baby, put him down for a nap and sprint for the barn. I'd grab Gambit, tack him, head for the arena and put the baby monitor on a fence post. Gambit and I would begin our warm-up. Within a few laps of the arena the baby monitor would begin squawking. Baby was awake. The ride was over. I would get rides in after school hours when I could coerce the barn owner's daughter to watch the baby. But then,  maternity leave was over. It was time to head back to work. I couldn't afford to own a horse if I wasn't bringing in a pay check. So now I had to juggle baby, horse and a job. I discovered something. I could be a horse owner -or- I could be a mom -or- I could be a teacher. I could do one of those 'jobs' fantastically well. (Did you notice being a wife didn't even enter into the equation?!) I could do two of those 'jobs' passably well. I failed at doing all three. Something had to go. Since I couldn't give up the baby, and I needed the job, Gambit lost out on this deal. Or, maybe he didn't! He was sold as a Western pleasure horse, something he had proven to be very good at doing and something he liked far more than the English work I was asking of him.  And I went on to be a mom of not one, but two healthy boys!
at September 16, 2011