Labor Day... You Better Believe It!

We labored on Labor Day. Actually, we labored most of the weekend. I haven't felt this utterly, bone-weary, foot-tired, sore-muscled in a while. It actually is a very satisfying feeling! I know I have accomplished something!

It began innocently enough on Saturday. We went to a food festival. Nothing tough about that. But, on the way home I called a farmer whose number I had found on Craig's list. He had hay in the field, ready for pick up. We stopped by and loaded 22 bales on our truck, and made arrangements to return the next day with our flatbed. So, our warm-up for Labor Day consisted of unloading and stacking the 22 bales.

Sunday dawned cool and sunny. A beautiful day to head back to the hay field - but this time we loaded 85 bales. Oh, and did I mention that the bales weigh about 60 pounds, on average? That's 2 1/2 tons!! Thank heavens the farmer helped us load and stack the trailer! Our barn doesn't have enough storage space the way it is currently configured so we put a series of tarps over the hay, leaving it on the trailer. That was mildly entertaining for the neighbors as there was a nice breeze which tried its best to make kites out of the tarps! We finally got them tied down.... and then I began to worry. Are the tarps too tight? Will the hay sweat? Will we lose some of our precious commodity to water damage or mold? Is the moisture content of the hay too high? Will it spontaneously combust? Dear hubby, by this time, was working on our fencing - trying to undo some damage caused by Pippin. (uh...sorry about that..) I wandered over and mentioned my concerns. He sat back and thought for a moment. We had talked about building a 10' X 12' storage building.... but no, he decided. That really isn't the solution to our hay storage issues. He packed up the fence tools and headed to the barn. "Let's put in the doors to the stalls. Then we can use part of the run-in area for hay storage." 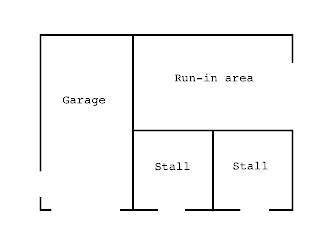 This is the barn layout as it currently exists. The garage area is used for some hay storage (62 bales at the moment), grain bins, tack, harnesses, a carriage and a forecart, our tractor, various odds and ends, Mama Boots and her bowls and litter box, some bedding, and snow tires. It is a catch all and has caught a lot of stuff in the few months we have lived here!

The run-in area has a sandy floor. This opens into the boys' paddock. They can go in and out at will. We did wire a panel with a gate into the doorway so we can hold the horses inside if needed. The horses share this area with 2 pigeon families. We hope they don't have to share next year!!

The stalls are not very user friendly in their existing state, at least not the way I keep my horses. The stalls have dutch doors which we can see from our house. The stall on the right does have a window. The stall on the left has a bit of translucent fiberglass paneling high on the wall which allows limited light from the garage to enter the stall. The stalls are totally lined with plywood. They are basically plywood boxes inside. 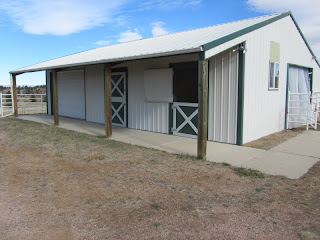 The dutch doors open onto a 4' concrete 'sidewalk' and from that, onto a gravel driveway to the garage. We really can't put runs in as we wouldn't have access to the garage or to a paddock area beyond. If I stalled my horses for part of the day or night, I could lead them from their paddock into their stalls, but there is no way to give them access to go in and out at will. This is something they were used to at their former barn. The horses were used to stalls with bars on two sides. They could see what was going on around them. They could see each other. Not so with our new barn.

So, we began to execute our plan to put a door from the back of each stall into the run-in area. Let the labor begin!

First we had to take off a 4' X 8' X 3/4" piece of plywood. That's when we discovered that the barn had better construction than the house! There were 40 loooonnnnnggggg nails holding the piece of plywood in place. Uh... no, the horse won't be able to pull this off! Then we discovered, and cut out, 6" thick insulation. Oh... do you want to know about the mouse/rat tunnels and/or the mouse skull I discovered in the insulation? Didn't think so! 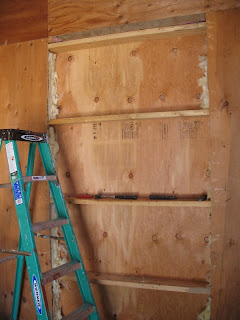 On the run-in side, we had some pretty decent , heavy gauge tin we had to take off, then another sheet of plywood with more than enough nails holding it up. 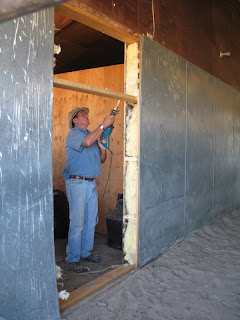 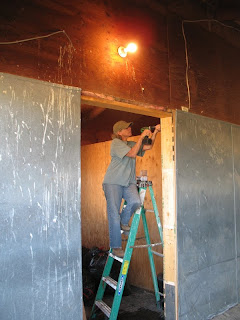 This is a rare shot of Dreaming! I am screwing pieces of 2" X 6" boards in the spaces between the wall. 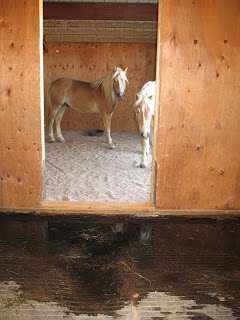 "Pippin, what is this? I don't remember a doorway here... do you?
There was a lot of snorting when the boys came up for dinner! They don't know what to make of the changes! The water that you see in the foreground is from the automatic waterer that is accessible from either stall. I used my magic toilet brush to swish the waterer and then had to let the water flood out of the drain plug. That was just about the most disgusting, stomach churning thing I've done in a long time. The waterer had black, yucky stuff in it. It smelled. I believe the yucky stuff may have been hay that fell into the waterer when last used over 5 years ago. Bleech! I let the waterer fill and dumped it 2 more times.... flooding both stalls. Then, I stopped the waterer from filling completely and added a little bleach. It sat over night and was rinsed out and refilled the next day.

Finally it was Labor Day. Time for the work to really begin! First, I took one of those extra spreaders we found in the barn and spread some grass seed in a sparse area of the pasture. Then, I spread the hay chaff that I collected at our old barn over the seed. (I had been storing 6 lawn and leaf bags of hay chaff in the stalls. That was one thing I could dispense with and not have to store.)  I put up two strands of electric wire to keep the boys out.  Sadly, the 6 bags didn't cover as much area as I hoped. But... we will have better grass in a teeny tiny bit of our pasture next year! I spread out a hose and let our 'rain train' go to work. I had to rescue it twice when it got bogged down in the clay.

Then, hubby and I set out to get yet another truck load of hay from our new-found farmer friend. So, we loaded another 22 bales and off loaded it and stacked it in the garage part of the barn. Then we began working on the door for the second stall. By COB (Close of Business) at the end of labor day, we had removed the plywood from both sides of the opening, as well as the tin. Tomorrow we'll be ready to cut the 2X6 cross beams and put 2X6 pieces in the sides. We have headers to construct and some more 2X6 pieces to install under them.

Eventually we'll build sliding doors for the new stall doors. We are going to build doors to shut the end of the run in area. We'll use some extra panels to block off an area in the run-in for storage... and my 85 bales will have a safe, secure and dry area to hang in.