This is the lay of the land around here. We have lots of horse neighbors. To the northwest we have two delightful girls. One is a grey Arab. Her real name is Samara, but they call her Sam for short. Sam really likes me - but then again, why wouldn't she! I'm one handsome dude! I think she goes for us chunky guys! She lives with Maggie. Maggie ignores us. When Sam comes to stand at the corner of the fence to make moon eyes at me, Maggie will be nearby, but she is usually eating. She really is a girl I could get to like! I bet she'd love to go on a date to some nifty green pasture some place!

We learned the names of the mares because our Mrs. Owner noticed that Sam was lying down a lot the other day. Sam would lie down on one side. Then the next time our Mrs. Owner looked, she'd be lying on the other side. She got up and hobbled a few paces, and then lay down again. Sometimes she lifted her head... maybe to look at a fly on her tummy. Then she'd put it down again. Our Mrs. Owner was a little worried about the grey mare. The man who is always hanging around her is some sort of computer genius. He figured out the phone number of the grey mare's Mrs. Owner and called her. That Mrs. Owner was very thankful. She called back later and introduced herself and the horses. It turns out that Sam likes taking naps, but that hasn't been her usual behavior lately. It also turned out that Sam may not have been feeling all that great because she wouldn't eat for a few hours. (I can't even imagine not wanting to eat!) But, then she felt better and ate some. So, I guess everything is OK. 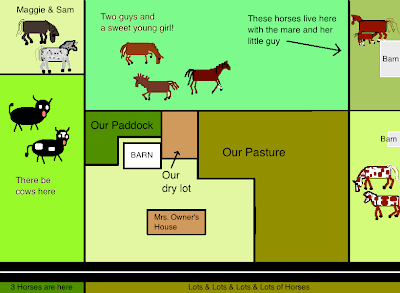 Due north of us there are usually three horses. We haven't been introduced to them by name, but we know them. We can sniff over the fence. The young gal is pretty sweet on Doc. She's a beautiful bay. She likes to come and show off her feminine side to him... if you know what I mean! She is usually escorted by an older, bigger chestnut. I think he might be her chaperone. He doesn't particularly care for either Doc or me. He'll try to wedge his big self between the fence and the cute young thing and then shows his teeth at us.  The other brownish, chestnutty, muddy horse is kinda standoffish. He rarely bothers with us. These three horses actually live over with the mare and her kid. We get to watch the kid play. He jumps and runs. Rears and tears around his mom. He hasn't been let out in the pasture where we can meet him nose to nose. Maybe some day he'll come over to visit. We've heard a lot of whinnying going on the last day or so. We're thinking that maybe the people owners separated the mare and her kid. Poor things.


We have spotted guys east of us. When we first moved in there was only one spotted guy. He's retired. Then one day I thought I was seeing double. There were two of them. It seems that the new fella was a teacher, like my Mrs. Owner. He hurt his leg and can't be used in a riding school any more. So he gets to retire, too.

There are some kinda strange animals beyond the spotted boys' pasture, across the road. They are the size of young foals. We can see them once in a while. Even though we sometimes can't see them, we know they are there 'cause they laugh all of the time. They laugh really loud. They say, "Hee-hawww, hee-hawwww-hawww-hawww!" Our Mrs. Owner loves to hear it... but we just think it's weird.


We also hear a lot of whinnying to the south of us. There is a big huge barn there with lots and lots of horses. Sometimes they put some of them in a pasture across the road from us. Once in a while we'll talk to them - but usually we are too busy eating. Oh, and next to them there are three more horses. They have funny spots on their rear ends. It looks like the Magpies have left lots of dookies on their hinies, instead of the one or two that Doc sometimes gets - hee hee! We really don't know much about them 'cause they are over the road and through the pastures away from us.