Another tale from life in the Carolinas....

One night I had settled in for a long winter's late summer's nap when I was rudely awakened from my slumber by the ringing of the telephone. I waited for my husband to answer, but the phone kept ringing.... and ringing... and ringing. Alright, already! I'll answer it.


Have you ever experienced that mind-befuddling confusion when you first wake up and things just don't quite make sense? This was one of those times. My husband was on the phone. He was calling me. But wait... he was in the family room watching TV, wasn't he?


But no. My husband asked, "Could you please come down and turn on the porch lights?"


What??? (Again, this is still not making sense to my sleep-fogged brain!)


It turns out that my husband had gotten a call on his cell phone. At that time our cell phones only worked reliably if we were outside the house. So, he stepped out on the front porch, in his bare feet, to talk on the phone. As he was finishing his conversation our dog trotted up - but stopped and backed up with his hackles raised. Hubby wasn't sure what was going on, but as he turned to look where the dog was staring, he could see the silhouette of a snake in the light coming through the glass of the front door.  Hubby was trapped. He wouldn't walk around the house in his bare feet to get to another door as he had once stepped on a snake in the dark. He didn't particularly care for that feeling and didn't want a repeat performance of the "Oh, my God, it's a snake" dance. He couldn't go through the front door. His only recourse was to call me.


Once the lights were turned on my husband discovered why the dog had reacted as he had. The snake was one of our local colorful characters... a copperhead. We figure the copperhead was drawn to the light of the door because toads congregated there.  The toads found easy picking as moths were attracted to the light shining through the door. The food chain in action! Sadly for the snake, my husband was even higher up on the chain than he. 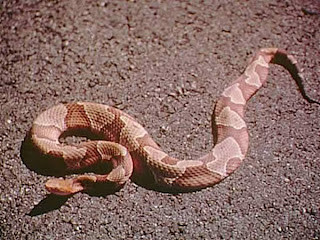