Many years ago... (ah, maybe I should amend that to say: many, many years!) my parents moved to New York City and I moved to college. I have never been a city girl and I didn't particularly care for apartment life in the city. In a ploy to get me to stay in the city for the summer, my mother sent me across town to ride at Claremont Riding Academy. That was the best carrot she could find to get me 'home' for the summer! The experience ranks among the top 10 on my list of incredibly cool, memorable events in my life.

That spring day, so long ago, I hopped on a bus, wearing my riding boots and breeches, and carrying my helmet. After a transfer, I finally arrived at the stables on West 89th Street. The stables were originally built in 1892 as a livery and later became a riding academy. I walked into the office, introducing myself and explaining that I had a reservation for a ride. The fellow at the desk turned to an intercom and asked the metallic voice on the other end to send Floppy down. He told me to step into the 'arena' and that my mount would be there momentarily.

source
The 'arena' was a large open space, like many arenas, but this one had posts throughout. I guess horses who were used to the space would be quite handy at dodging the 'urban trees'. 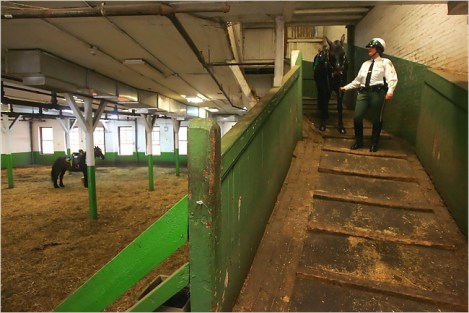 Before I could take too many steps into the arena, Floppy ambled down the ramp, all by himself, and came to stop in the middle of the arena. Shortly afterwards, a stable worker motioned me over to Floppy. He made sure that the tack was fitted correctly, that I mounted safely, and that the stirrups were the right length. Then he explained that I could exit the stable, turn right, then right again until I reached 90th street, which was one-way going towards Central Park. 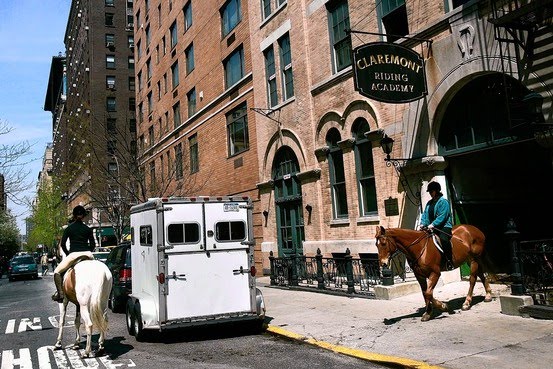 He explained that I would see the entrance to the bridal path in front of me, and I should turn left to ride the path around the park.  I was the only horse out there. The path was a nice wide, gravel way, with fences on either side. A far cry from the trails I was used to riding 'in the country'! There was absolutely no way I could get lost!

I enjoyed my ride as I walked, trotted and cantered on this island of green in the midst of mayhem the city.

When I finished my circle, I exited the park, and rode down West 89th Street back to the stables. 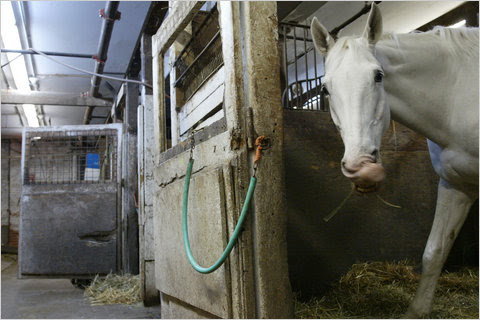 After dismounting I inquired about what I was to do with Floppy. The stable worker told me to simply let him go. He explained that Floppy would go up the ramp, get a drink of water, and then enter his stall. Someone would untack him and shut the stall door later. I asked if I could follow, as I was intrigued. Sure enough, Floppy knew the routine. I was amazed!

I made my way to the bus stop, and made my way slowly back to my parents' apartment. It was a long, hot trip. I considered my experience. It certainly was novel. Would my horse acclimate to life in the city? Was she a country horse or a city horse?

Ultimately I decided that neither my horse, nor I, would enjoy the city life. My mother was disappointed, but she understood. I spent the summer, with my horse, living with a friend in Rochester, NY, but had the enduring memory of a wonderful experience riding in New York City.

The Claremont Riding Academy, like so many institutions of old, succumbed to the increased costs of providing services in an urban setting, health and safety regulations, and changes in the park.