As I separated the trees weeds from the forest flowers and found my garden, I noticed a few plants that had not succumbed to the urge to grow taller and reach for the sun. A few others were sprouting 'babies' - a reaction to the stress of being crowded by weeds, or so I thought. They were pretty in their own right. 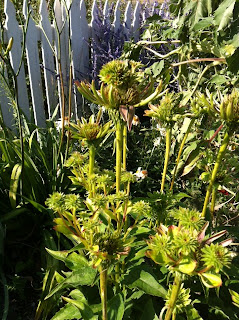 Some showed variations in color. 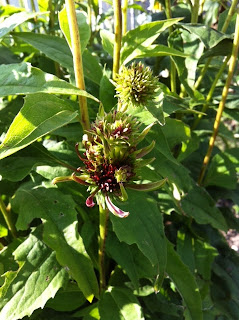 Others put up small plants on stalks,
instead of petals. 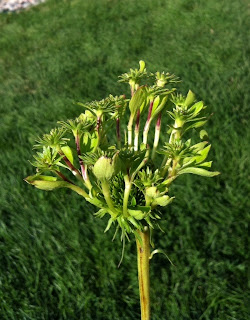 Do you recognize my plants gone wild?
They are my Echinacea purpurea
also known as purple coneflower. 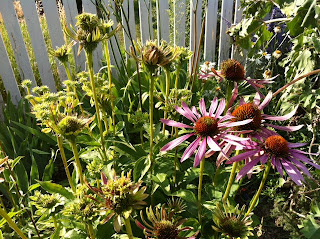 After having spent a little time with my smartest friend, Google, I now know that my plants have been infected with a bacteria called phytoplasma. Phytoplasma are small, parasitic pathogens of insects and plants. The insects, generally some sort of 'leaf hopper', acquire the bacteria in juices they when they feed on infected plants, and then inject it into new plants. The plants can live for several years, but generally are not as hardy as uninfected plants. I found it interesting that one of my plants has some stalks that are infected and others that show normal development. I do think that stress was a factor in making my plants more susceptible.  Now, I have to decide whether to remove the diseased plants, or see if they can overcome the bacteria. Since the disease can infect a number of plants, I'm leaning towards a humane end.

The information I found about phytoplasma came from the Phytoplasma Resource Center. Their Web site included a list of symptoms. These are symptoms I noticed on my plants, including links to the Resource Center's images:

Stunting - overall reduction of plant height due to shortening of internod

Bunchy top - shortening of internodes at and near the tip of a branch, resulting in bunched growth at the end of the branch

Nature never ceases to amaze and delight me!