It seemed like a reasonable idea when Mr. Dreamy suggested it. After all, he had seen some trees at a "Big Box Store" that looked pretty nice and were decently priced. If we planted some trees in front of the new garage, it would break up the bigness of the facade and it wouldn't look so... so... BIG! 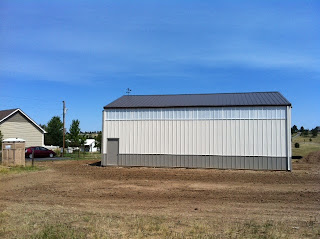 Off we went, looking at trees.
The trees he had seen were a nice size, but they hadn't been watered properly and the leaves were already beginning to curl. We were both angry that the store had failed to take care of the trees. The folks in the garden center just shrugged their shoulders, saying they could only water first thing in the morning by city ordinance, and they'd let the people who do the watering know that the trees needed to be watered.


We went on down the road
to a beautiful garden center. Their trees were 25% off their rather high retail price. They were lovely, and certainly something to consider.


We went on down the road
to another garden center. They didn't have the specific type of tree we desired, and their trees were only 10% off. The trees they had that we were considering were large balled and burlapped trees. The planting charge would be 1/2 the cost of the original price of the tree, on top of a delivery fee.


We went on down the road.
The next stop was at a struggling garden center. We had to climb up and over dirt piles, and negotiate a trail between puddles to maneuver between and among the rows of trees. There were "sold" tags on the trees. We couldn't find prices. It was unbearably hot. We went inside the building and found a price list. Finally a worker (the owner?) came over and went over the prices with us. The "Sold" trees had been sold to their nursery. He supposed he should take those markers off. The trees were not a bargain and there would be no discount for planting and delivery.


We went on down the road...
And so our afternoon progressed, stopping at two more tree farms. We came home. We were hot. We were tired. We had numbers swirling through our heads. We talked trees that evening. We settled on what we wanted to buy, and where.

Email ThisBlogThis!Share to TwitterShare to FacebookShare to Pinterest
Labels: trees