Mr. Dreamy wanted to buy a toy helicopter. Actually, it is some sort of quad-copter. It has four motors. They were selling them at a booth at the rally we attended in June. I gave him that look. The practical side of me said screamed, "No"! Mr. Dreamy walked away, with his head hanging only slightly lower.

While having dinner with my brother, who was camping next to us, the helicopter was mentioned (and something about my tightfistedness, as I recall!) My brother sat up a bit taller and smiled, that smile. He has a quad-copter. The next day, after he had charged the battery, he showed it to us. 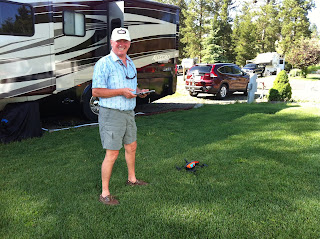 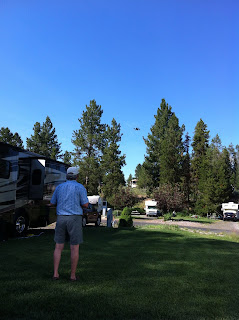 There it is, flying between the two, tall pines.
Do you see it?
Gypsy & Tucker did.
They did not like it at all! 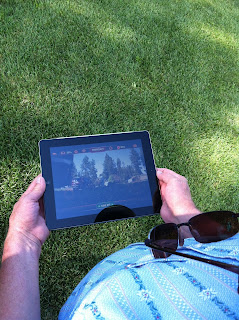 The helicopter is controlled by an iPad app.
It has a camera and you see the view
from the copter on the iPad. 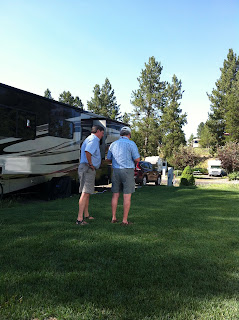 Is there such a thing as 'copter envy? Well, as they say, the only difference between men and boys is the price of their toys!