Our first Aussie; a rescue. Several trainers recommended that Austin be put down because he was aggressive towards humans. We adopted him (didn't have any visitors at the house for 6 months) and then learned that he suffered from epilepsy. Perhaps that is why he pretended to be so mean!  We had Austin with us for six years. We experienced many seizures, but loved his crazy antics. Sadly, Austin began bleeding internally one evening. We decided that we would not put him through exploratory surgery. We let Austin pass over the rainbow bridge in January, 2009. 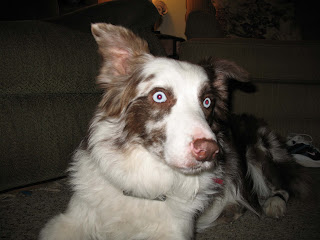 Here is Monty; another rescue. Monty and his brother, Carlo, were discovered thrown in the marsh in coastal South Carolina. We adopted Monty from a local shelter when he was 5 months old. Our 85 pound brindle was the biggest baby around. Here Monty is asking me to chase him, his favorite game. Monty developed lymphoma. He crossed the rainbow bridge last May. He was 11 years old. I still miss this gentle guy! 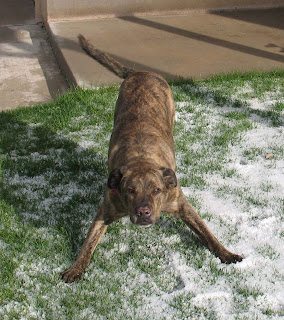 Monty really preferred to be an 'only' dog. After we lost Austin we decided that we would let Monty live out his life without competition from another canine. After losing him to lymphoma we felt the void. In June we found Tucker, an Aussie puppy.
To view other canine companions, check the Sunday Stills site.
at March 19, 2011