My Moment Under the Lights

I was onstage at the Grand Ole Opry! Yes, little ol' me! (And... I was even wearing my new hat, although the sales clerk had taken the price tag off, despite my suggestions that I could be the next Minnie Pearl!) Of course, there were no artists on stage. No musicians. No technicians. Just me and a bunch of other people on a behind-the-scenes tour. Regardless, I experienced a little flutter of awe as I stood on 'the circle' in front of the microphone and looked out over the empty seats. 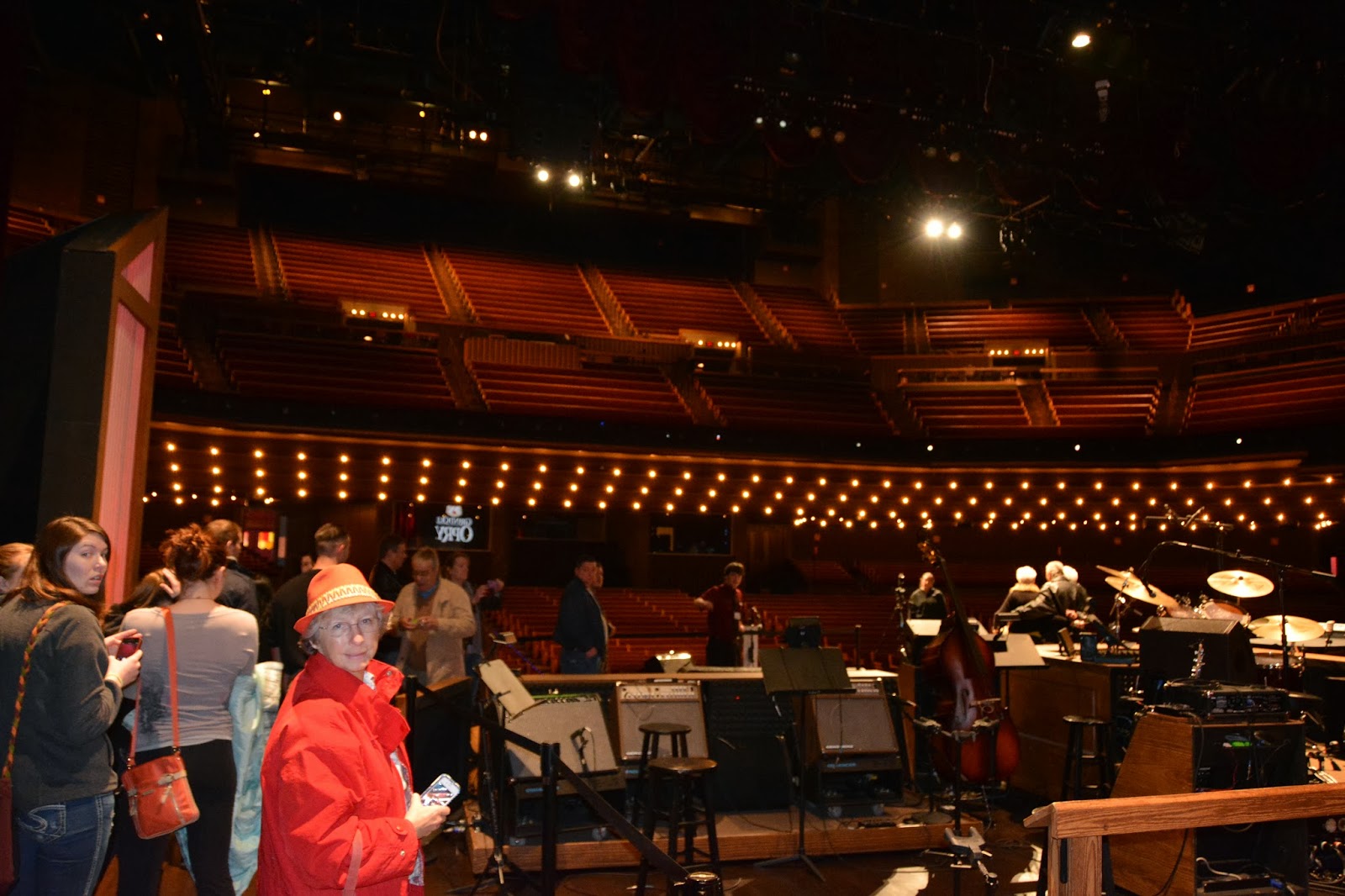 Since it was supposed to be a cold, rainy day, we Dreamers decided to do something indoors. Touring the GOO was an option, and seemed to be the right thing to do considering where we are visiting at the moment. We both came away feeling a bit for knowledgable.

A bit of history:
In 1925 WSM, a radio station sponsored by the National Life and Accident Insurance Company, began a weekly music hour of country music. The show followed an hour of staid classical music. The director's response to his show's popularity was to exclaim that Nashville could have its own grand ole' opry. That name stuck. More and more people arrived on the set of the show to watch it being aired, and the opry sought out larger and larger venues to produce the show. In the 40's it found a home at the Ryman Auditorium, which served its needs for 31 years. They finally built a state-of-the-art theater in a huge entertainment complex that has the Opryland Resort and Convention Center and formerly the Opryland Theme park, on the property. However, the Ryman Auditorium is still used for events in Nashville. I found it interesting that the call letters for the radio station, WSM, can still be seen on the microphones at the GOO. The call letters stand for "We Shield Millions". WSM is still on the air at 650 AM or online.

Membership has its privileges:
Only select artists are invited to become a member of the GOO. Currently there are 66 members of this elite group of performers. The decision to invite a new member into the group is made by management and the invitation is based on a number of attributes of the star. Last year's only new member was Old Crow Medicine Show.

Each member of the Opry has his or her own mailbox for fan mail. As a concession to his short stature, Little Jimmy Dickens, at 4' 11", has his mailbox out of alphabetical order so he can reach it. Jesse, our tour guide, points out Jimmy's box. 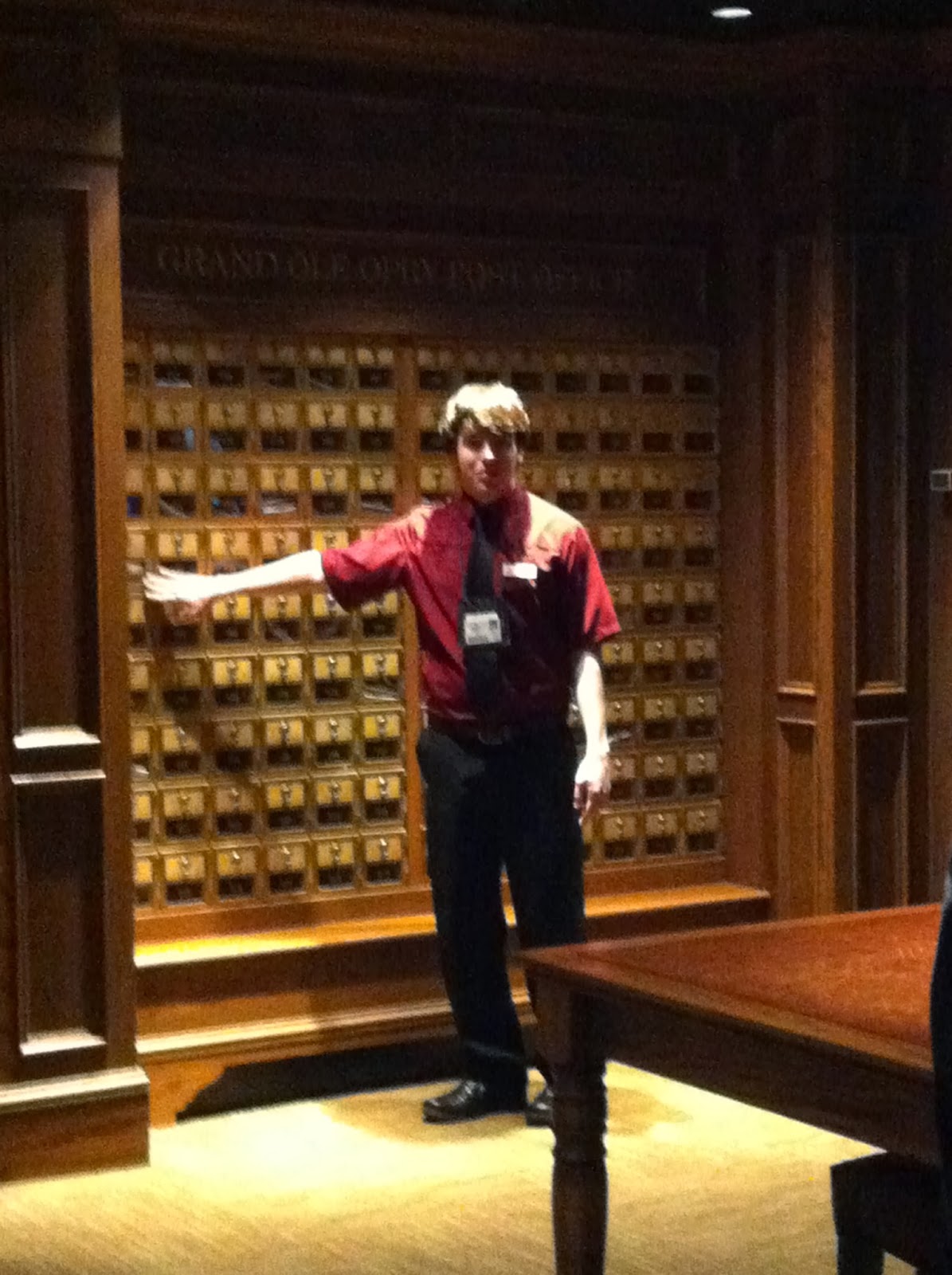 Members, and other performers, enter the building through an understated walkway. The only recognition of their status are a few bushes pruned in the shape of stars.

Behind the scenes:
When performers arrive backstage they check in at a reception desk and receive guest passes for friends or family. They are directed to their dressing room, one of 18 that are uniquely decorated. The dressing room numbers are on the floor in large, stylized inlaid guitar picks. 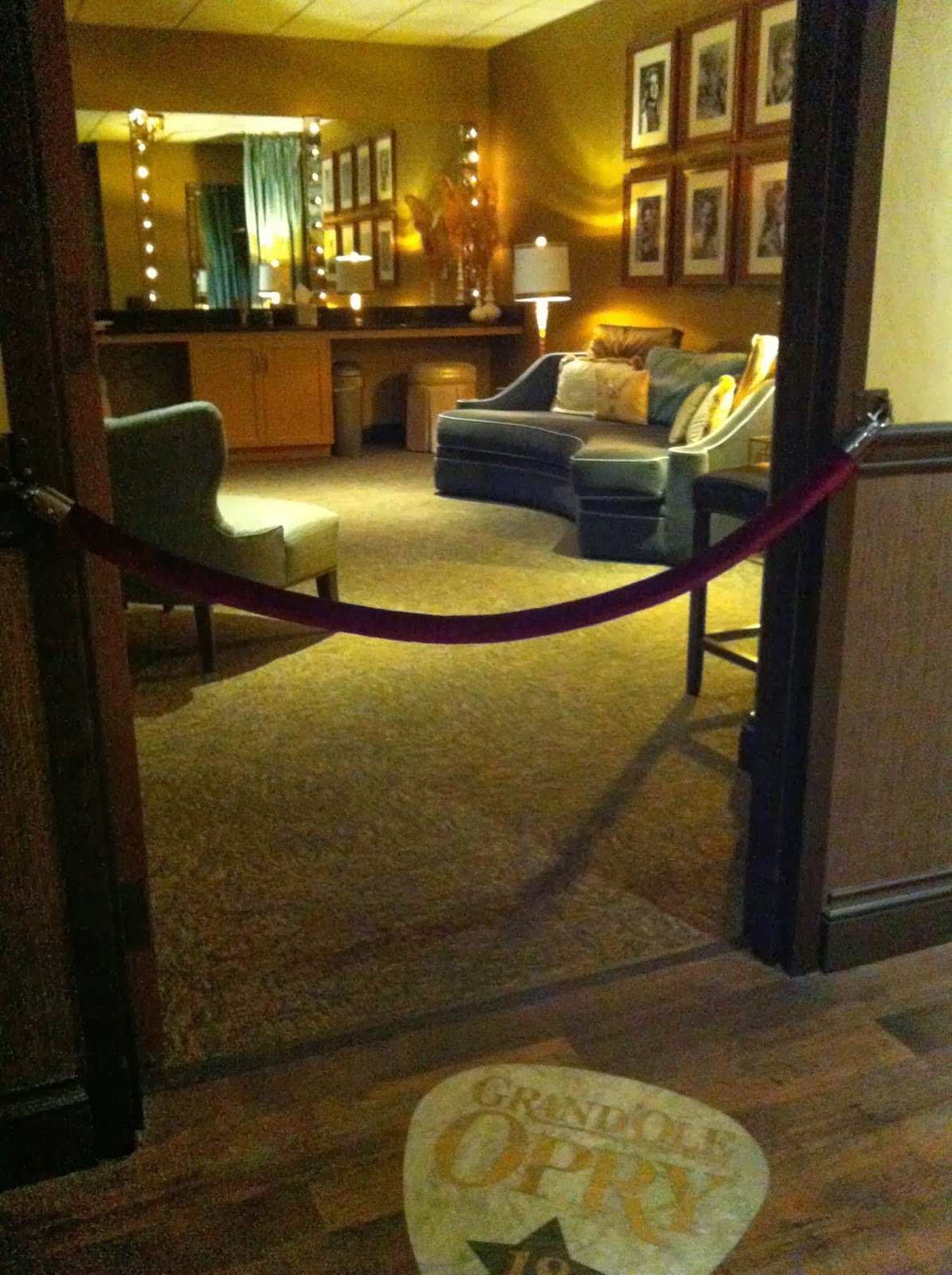 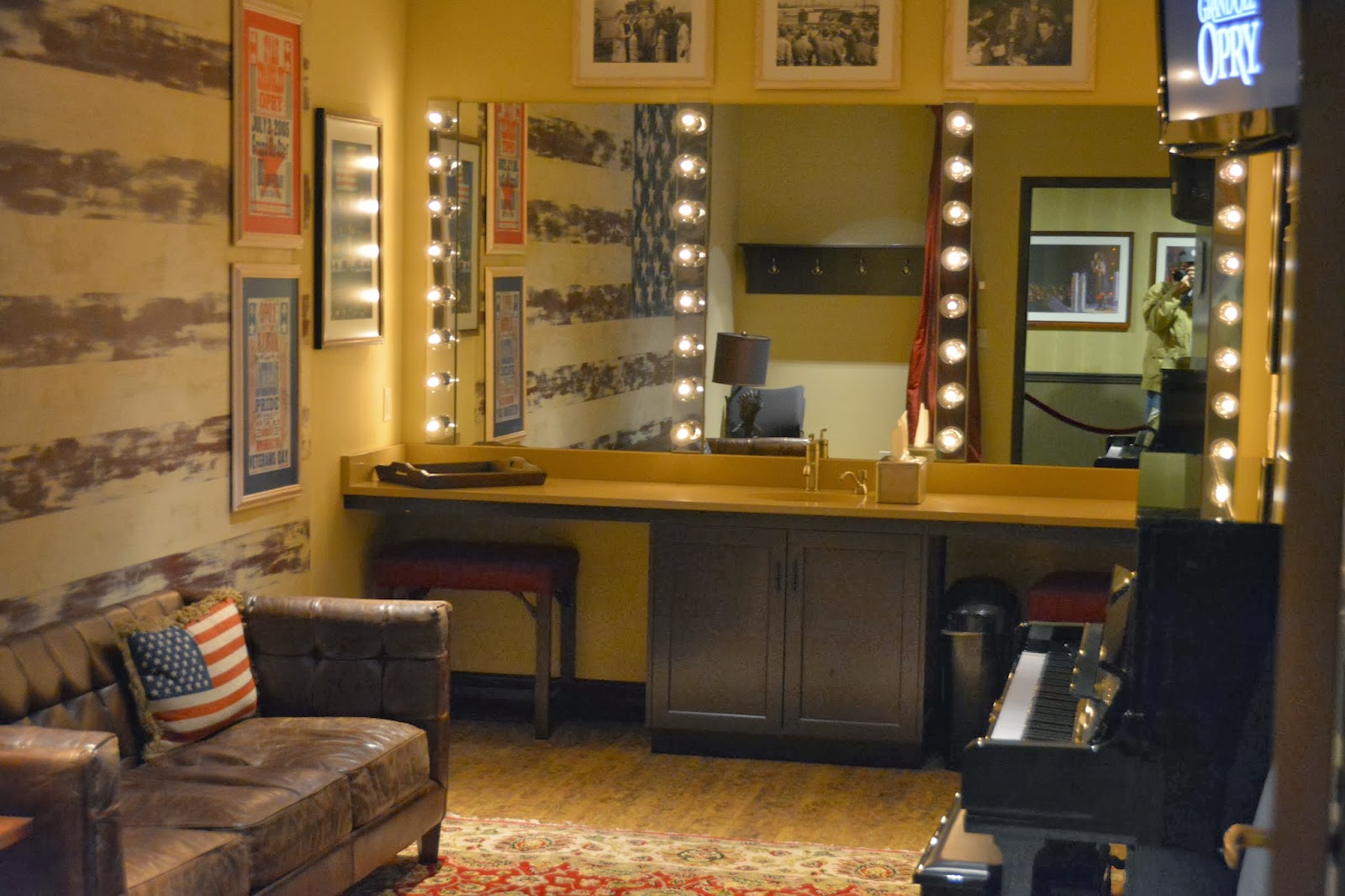 The hall is adorned with pictures of current and past members, as well as brass plaques listing all members of the GOO.  Hey, I recognize this guy! Keith Urban is now a judge on American Idol. 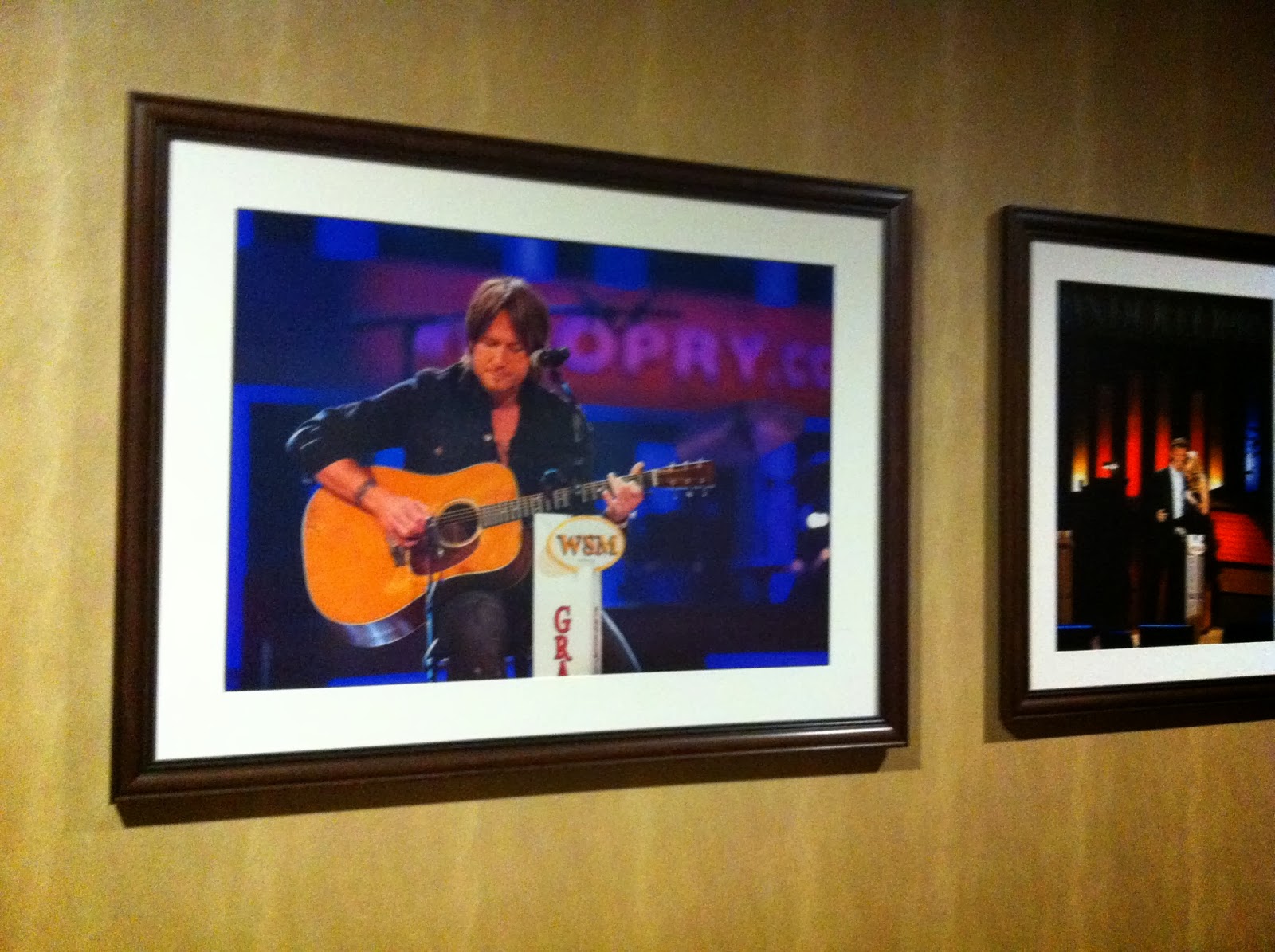 The "green room" also has many historic pictures. Were I a huge fan of country music and more familiar with some of the 'players' I would have enjoyed spending more time looking at the pictures.

Discovered:
As we walked on stage our tour guide indicated that if we wanted to sing at the Grand Ole Opry, this might be our opportunity. One of the girls on our tour is a singer. She stepped up to the mic and belted out a song. 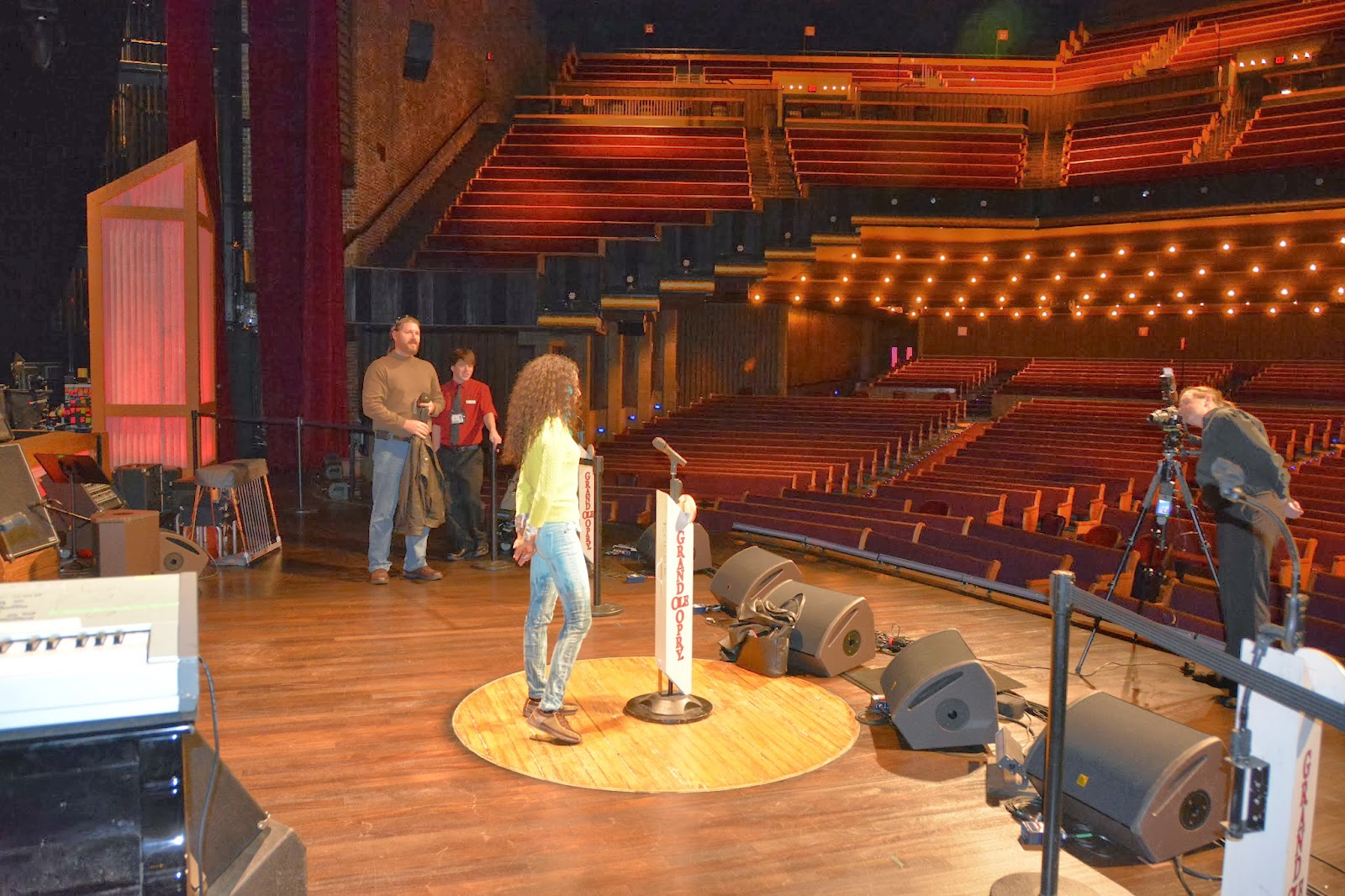 As she walked away, arm in arm with her significant other, I could hear the emotion in her voice. I don't blame her... it was awesome just to stand there and look out at the bench-style seats, many that also came from the Ryman Auditorium, and to think of hundreds who have stood there before, and thousands who have enjoyed the shows.