It's Been a Wild Ride

Back in the fall Mr. Dreamy and I went back and forth, up, down and sideways, trying to decide if we should upgrade our motorhome. It's amazing how one can find justification for something, even when it might not seem reasonable to others! We know that we enjoy traveling and having spent 6 months on the coach last year, we figured having something that was a bit more substantial, and something that might handle the highway a bit better would be reason enough to trade up. We talked with the salesman who sold us our first motorhome, just out of curiosity, to see what kind of dent this crazy-a$$ idea of ours might make and how much we would owe the bank. The numbers were not as bad as we had feared and we decided, what the heck, we will only live once and we can't take it with us. So... we ordered the new coach.

Then we waited. Sometimes not too patiently! Our salesman kept us informed, so even though we couldn't be there to watch her go down the line, we could be there in spirit. We finally made it to Red Bay just after the coach came out of the paint shop. We had visitation rights as she went through final inspection and cleaning. 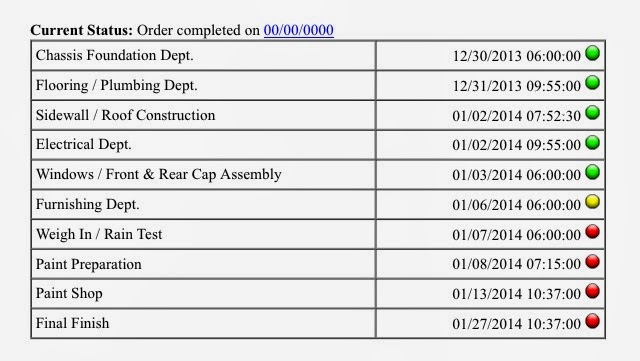 Unfortunately, there are no deliveries at the factory. The coaches have to go to the dealers for delivery.

Unfortunately, our dealer is in Wayland, MI... under what seems like hundreds of feet of snow. The area has been the bullseye for frequent lake effect snowstorms. We decided we did not want to go there! We were able to make arrangements for delivery in Nashville, where our new coach would arrive and they would take our old coach back.

But first... our coach needed some paint touch-up at the factory - one day delay.
Next, there was a factory recall for a bushing in the transmission - another delay.
Then, the weather was not amendable for driving to the north country, a road was closed - one more delay.
Mr. Dreamy's patience was wearing thin...
The coach finally left for Wayland.
We knew there would be a two-day turnaround to allow the dealer to prep the vehicle.
But then... the windshield wipers didn't work... oh no!
A part had to be ordered, but it was too late on a Thursday to ship the part - delay.
The part was shipped overnight, but there were no deliveries on Saturday - more time!
We left for Nashville as Mr. Dreamy's patience grew even thinner..
Finally, on Monday, the part arrived in Michigan. The coach was fixed. 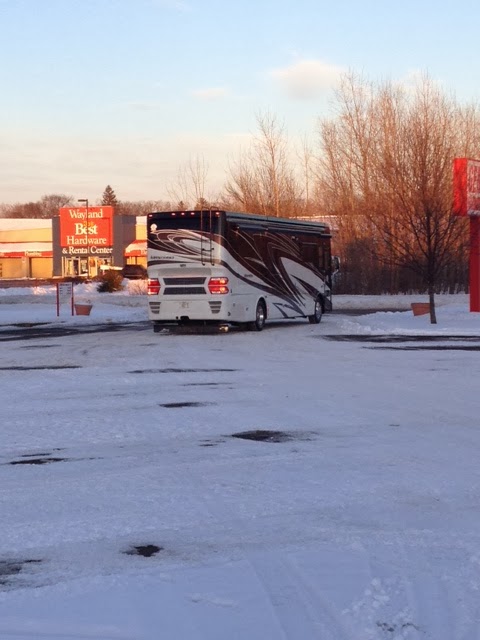 Our salesman sent Mr. Dreamy a picture
of the coach leaving the Dealership in Michigan.

I started packing and cleaning. (We actually started earlier, but the bags and boxes were getting in the way, so we put off packing more.) I had some empty bins and laundry baskets. I found some large boxes. I borrowed some smaller boxes. I packed every shopping bag and tote bag I could find, and we piled as much as we could at the front of the motor home. The items in the refrigerator and freezer were bundled in plastic bags, ready to load into laundry baskets. Mr. Dreamy worked on emptying the cargo bays, and we prayed that the predicted 100% chance of rain would hold off.

The new coach arrived, and parked next to the old, door facing door. The driver helped us transfer the contents. Mr. Dreamy stayed in the old coach and handed baskets to the driver. The driver walked about 15 feet to meet me standing in the doorway of the new coach. We had everything transferred, and waved goodbye to "Ol' Red"just as the skies opened up. Someone was on our side!

I thought that would be the hard part. Unh-uh... I was so, totally wrong! Unpacking and finding a place for everything and putting everything in its proper place is still ongoing, as I write this post, while we sit in a bay back at the service center in Red Bay, AL! (that may be a whole 'nother post) 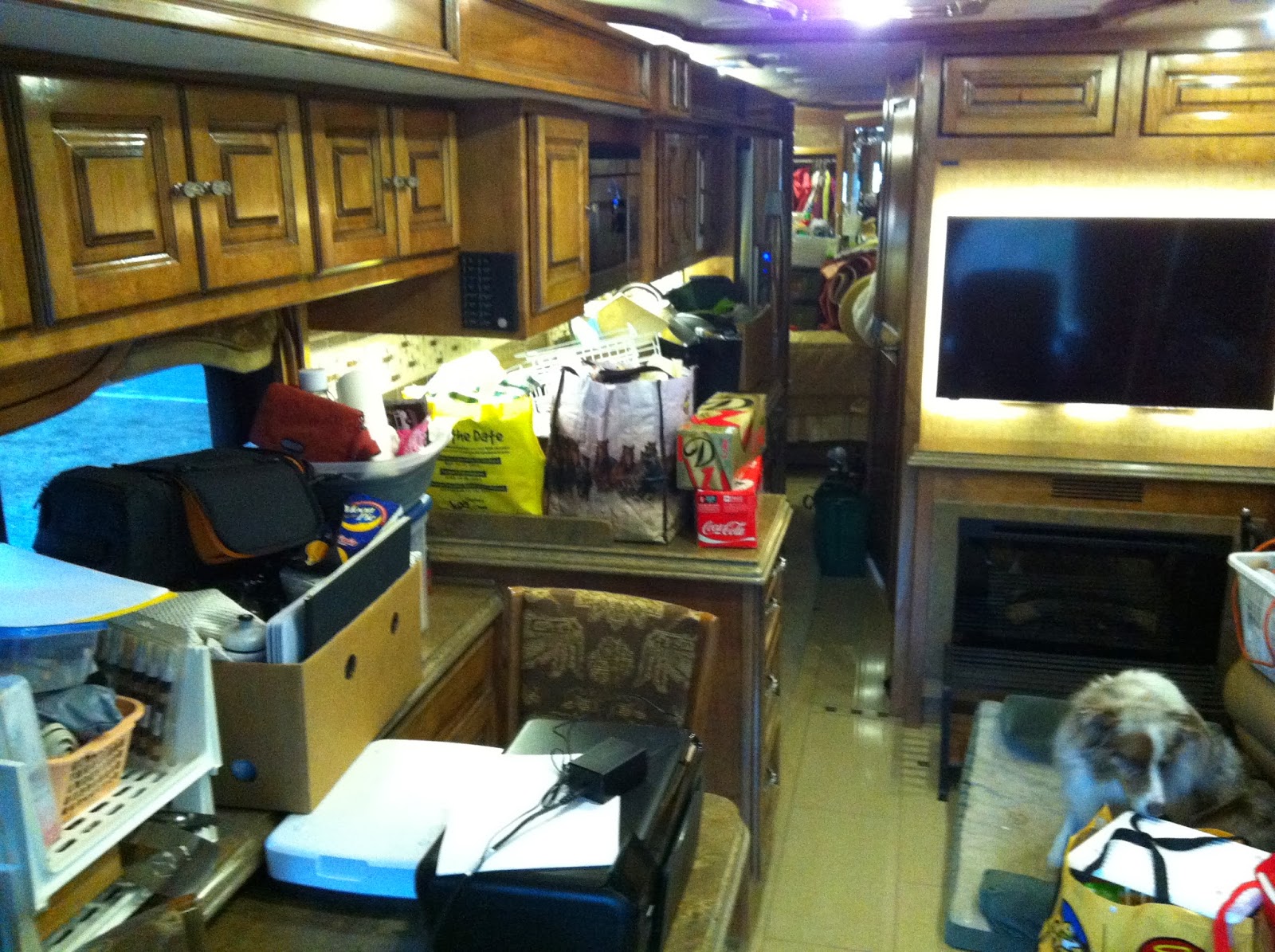 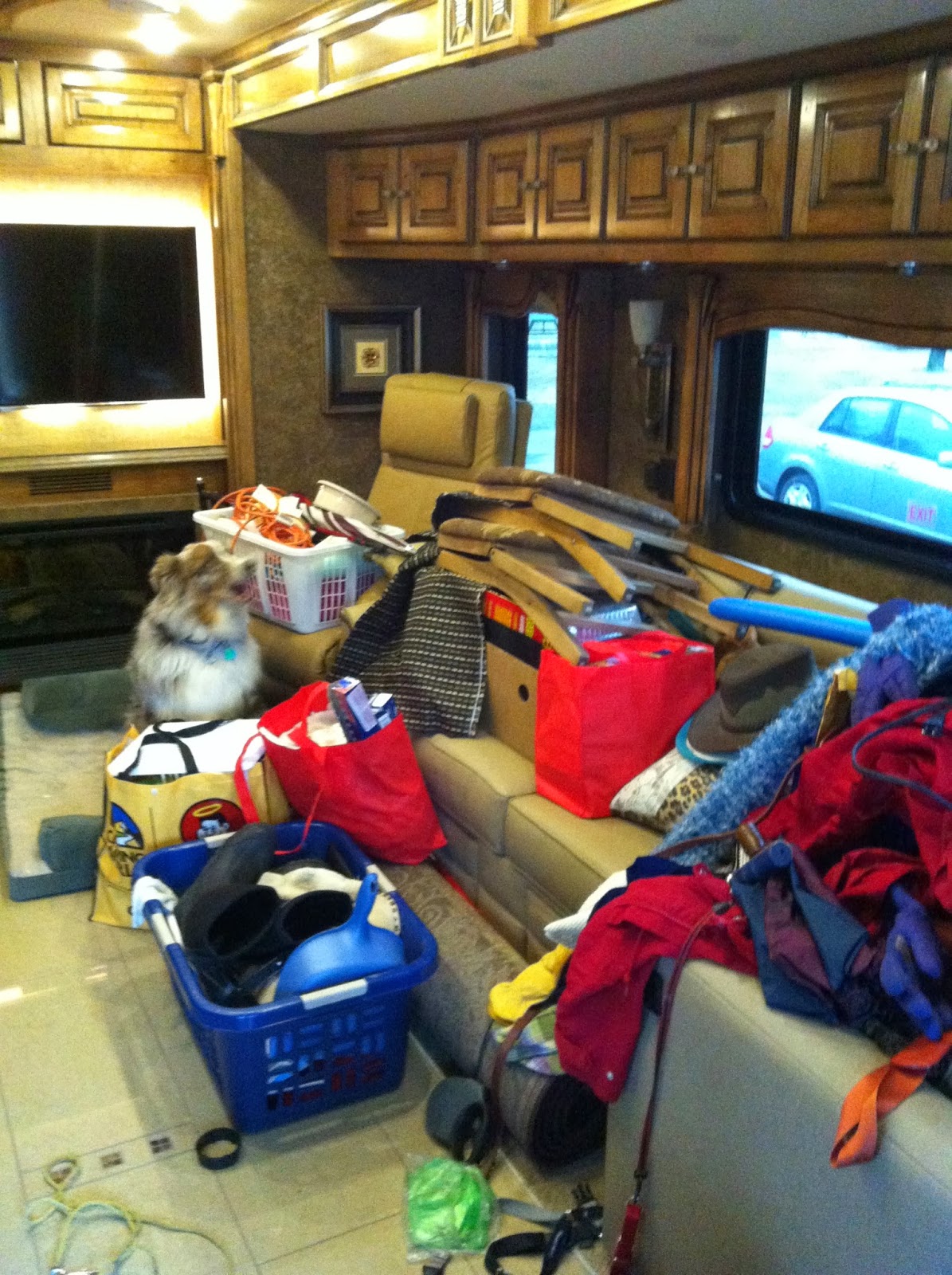