Our riverboat returned to Paris. We enjoyed a bus tour of the city. It was wonderful to see so many iconic "Paris" locations, but we didn't get off the bus too many times and most of my pictures had glare from the windows. I could have gone on a walking tour, but I wanted to see more of the sights this time. The next time I'm in Paris I'll get up close and personal with more of the historical buildings! But, I ventured out on my own to find a Pharmacie as Mr. Dreamy acquired a cold and needed some medication. I enjoyed walking into a shopping district and getting what he needed at the pharmacie and at the market, fantasizing about living in a nearby apartment and doing my marketing there.

That evening we went up on deck to catch the Eiffel tower doing it's hourly light show. It was a nice farewell to this lovely city. The next morning, we were on our way to Bordeaux. 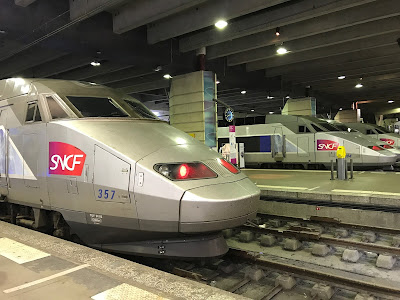 We boarded a bus that took us to the rail station, and we found our car on the TGV - Train à Grande Vitesse, "high-speed train". The trains can reach 200 mph. Our trip took about 3 hours and we traveled 580 Km, or 360 miles. This means our average speed was 120 mph, impressive when you also include 3 stops. The track on the southern part of our trip is not up to TGV standards, so that part of the trip was a bit slower. They are working on upgrading the tracks and this summer the new line will be open and it will take 2 hours, 5 minutes for the trip - the average speed will be in excess of 180 mph. The train was amazingly smooth and quiet, except when trains going opposite directions passed. Then, there was an amazing "POP" of sound as the air was buffeted by such large, fast objects passing so closely together.

A bus transported us to our next ship, the River Royale. We Dreamers were on this ship previously... in 2010. Here is a shot of my dad and brother, staring in awe at the walls of the deepest lock on the Rhône River. 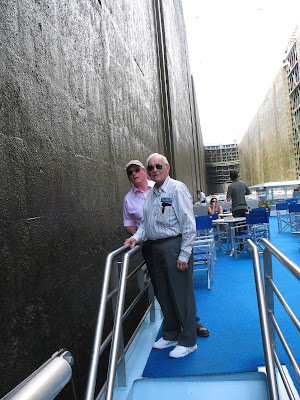 Since that trip the ship has been refurbished. Tt was moved from the Rhone to the rivers in the Bordeaux region. I was intrigued about just how they would move a ship of that size from one area in France to another. I asked A.J., the Cruise Director, and he found a picture of the River Royale in transit onboard a huge ocean going ship. The ship has doors, similar to a lock, that allows another ship to be sailed inside. Then the doors are shut and water is pumped out. Amazing!

We arrived at the ship just in time to catch the tail end of a market on the quay. Bordeaux has a long expanse of river front that has been renovated as a lovely open area park. The buildings on the other side of the street used to have storage on the main floor for wine merchants, and residencies above. The merchants would roll their barrels down the slope to the river to get them aboard freighters.