Walkway Over the Hudson

I used to drive back and forth from Rhinebeck, NY to Poughkeepsie, NY on a daily basis. On my way I would drive under a huge railroad bridge and then pass by the Poughkeepsie-New Paltz bridge. Both of these landmark structures carried goods and people across the Hudson River for years.

The railroad bridge was completed in 1889 and had two tracks, so rail traffic could easily go both ways. The bridge soared over 200 feet above the water, and was almost 7,000 feet long. There are approach viaducts on either side that add another 4,000 feet  in length.

The railroad ties on the bridge caught fire in 1974.  Burning debris rained down on the Poughkeepsie side of the bridge. After years of finger pointing, squabbling over insurance payments, and failure to pay taxes, the bridge was deeded over to a private group and the vision for a "Walkway Over the Hudson" was conceived in 1998. In 2009 conversion work was completed and the walkway was opened to pedestrian and bicycle traffic.

The approach viaduct reaches almost a mile into the city of Poughkeepsie. We first tried to walk the bridge on a Sunday. The place was mobbed. There were several planned bridge walk fund raisers going on for different causes. We couldn't find a parking place within a mile or more of the entrance. We were going to be in the area one more day, so we came back and thoroughly enjoyed the walk.

Looking toward the Highland side of the bridge 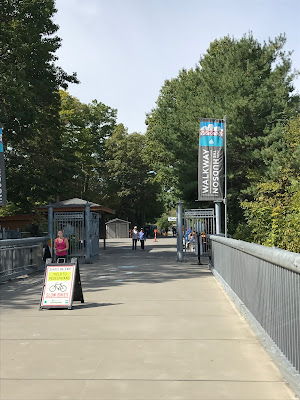 The views are spectacular. 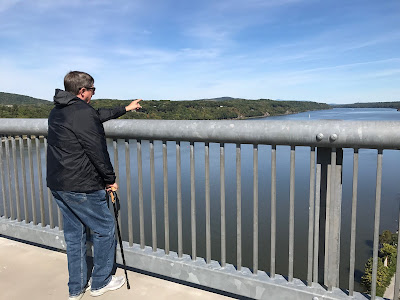 This is the Clearwater sloop.
It was first launched by Pete Seeger in 1969 for environmental education and advocacy. 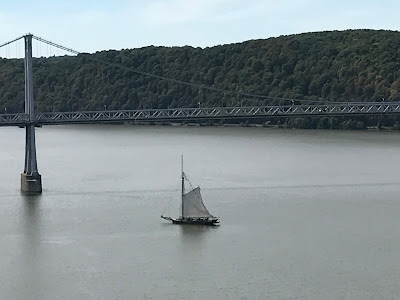 We stopped at the middle of the bridge for a selfie. 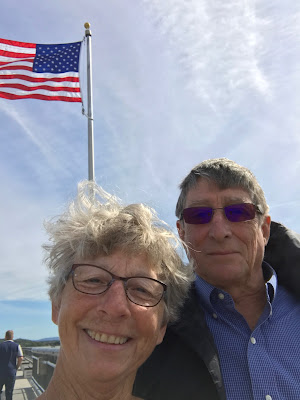 The bridge has quite a few posters placed on the railing.
One can learn about the redevelopment of the bridge as a walkway,
about history of the area and about things you can see along the way. 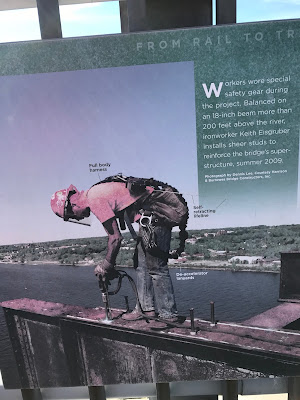 The Bridge is now a National Historic Civil Engineering Landmark. 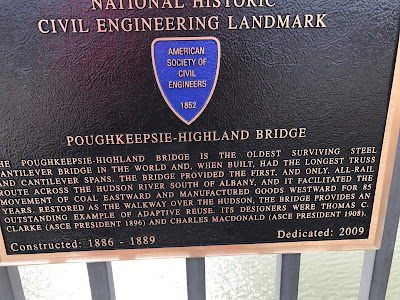