An update on the feral cats:

Dodger has left the area. I think. I haven't seen any photos of him using my spy camera (wildlife camera), so evidently he lived up to his name and dodged the situation as soon as I paved the way for his exit. (I saw him in the garage three days before I let the cats free, so I do know he put in the mandated two-week sentence. Well, perhaps I should say, I had a brief glimpse of his distinctive tail as he ran behind the bales of hay.) Perhaps he will return after he scopes out the neighborhood, or when the weather takes a turn, or whenever he feels like it. He is a cat, after all!

Freddie (the Freeloader) comes and goes. I catch him on camera now and then. I guess he's the sort of cat who likes to eat out on occasion!

Bob seems to be hanging around. He made the mistake (and I compounded it) of coming up to the house the other day. The dogs were excited. I thought they saw a bunny. I didn't see Bob slinking through the yard, until I opened the door. I am thinking that Bob may not come up to visit the house anytime soon! He was not received well by the dogs. They see "little animal that runs". They don't understand that I want him around.

When I upload pictures from my spy camera they pop up on the screen like this. They all look the same.

Each picture has a time and date stamp.
(As well as the phase of the moon and the temperature!) 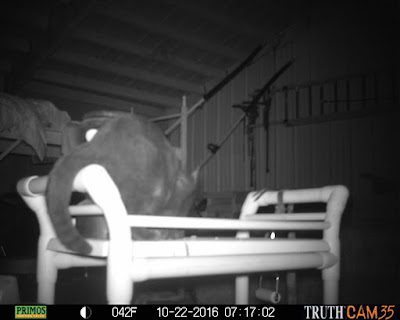 When I look at them in my picture file, the information looks something like this: 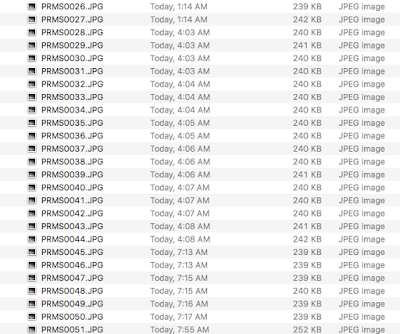 Bob seems to be a snacker! He likes to eat a little every 3 hours or so! I guess you could say, he eats like a bird!