I have been looking high and low for something that I just knew was hanging around. In fact, with my knack for spatial memory,  I was confident that it was on a shelf on the west wall.... somewhere. Or, at least I thought I knew that. With each foray out to the barn, down to the basement, into the garage (and believe me I kept going back to those places over and over again just hoping that it would suddenly pop up on a second, third or fourth visit) my conviction lessened. Mr. Dreamy told me that we had thrown it out two moves ago. I wasn't so sure. But.... not having found it on a west wall anywhere, I gave up. I was ready to order more. It isn't that expensive. I can buy a pound of it online for about $20. It's just the principle of the thing. Dag-nab-it. We have it. Why should I buy more?!

I don't know about you, but I can stand a certain amount of mess around me (OK, my mother would have told you I live happily with a lot of mayhem and disorder surrounding me) and then I can't hack it any more. The garage has gotten to that point. I decided I would tackle the garage, doing a bit of arranging, rearranging, tossing and cleaning every day.

On the west wall,

Just as I had envisioned,

Behind some paint cans! 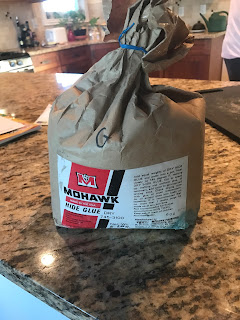 I have been looking for this very bag of Hide Glue. (You'll find out just why I wanted it in a later post... after I've had a chance to use it.)

Hide Glue is ancient. It was used back in ancient Egyptian days, and maybe even by Neanderthals. It is made by boiling connective tissue of animals. It is the collagen that is collected after boiling that forms the glue. In fact, the word collagen comes from the Greek word koala which means "glue".  (Have I impressed you with my knowledge? Well, to be honest I did know some of this but I checked my facts on Wikipedia.) The glue was used in furniture manufacture and most antiques are held together by this glue. When Mr. Dreamy did furniture repair he often used this adhesive (which is why we had it in the first place). The great thing about hide glue is that it is water soluble when warm water is applied (or a longer time if the water is cold). Thus, if you have an old chair, you can use warm water to undo the glue, so to speak. The glue will also crystallize with alcohol. So you can shoot alcohol into the join of a chair, and the glue will "let go". The other great thing about the glue is that when you apply warm water you can get all of it off. You can get back to bare wood. And, if you don't want to do that, hide glue is the only glue, according to my woodworking hubby, that will adhere to itself.

Now that I have found my glue,  my project can move forward. I can't wait to show you the end result!