On our recent trip to New York we stopped at the Corning Glass Museum in Corning, NY. We had visited there in the first years of our marriage, and I'm so glad we went back as I had forgotten so much of what it was like.... or things had changed so much... or maybe a bit of both! In 1972 they experienced flooding. The flood line is marked at about 4 feet on the glass wall at the entry. That could be reason enough to change things a bit! Can you imagine having to clean all of that glass?!

The collections are extensive, and include many examples of glass through the ages. The goblet on the left is from ancient Egypt. It dates back to 1460-1360 B. C. Ancient glass makers used cores and formed the glass around the removable center. I was amazed at the colors and the complexity of designs. 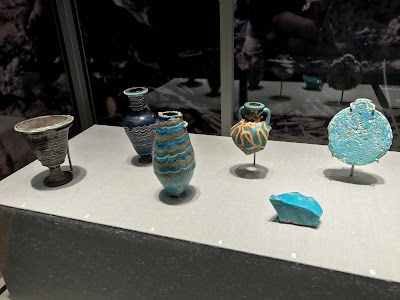 The ornate bowls in this display were created around the 1st century. 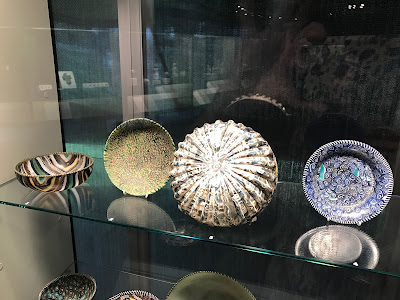 Here are some whimsical pieces, probably from Germany in the 1700's. It's a bit tough to see, with all of the reflection, but the piece on the left is a "trick goblet", and the green piece is a "Schnapshund",  an animal bottle. 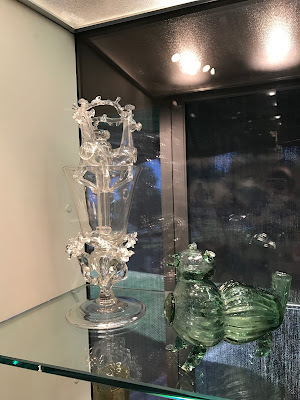 The museum also has some stained glass pieces. This one, by Tiffany, was installed in a mansion near New York City. The home was donated to a church, and most of the furnishings, including this window, were removed and sold. Later, this window was donated to the museum. All of the colors in this window are created by the use of glass. 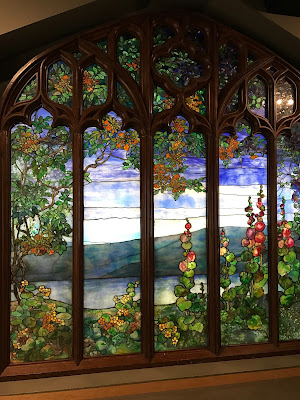 Among the displays were several cabinets showing examples of crizzling. Crizzling is the decay of glass over time. If the mixture of silica, alkali and a stabilizer are not in correct proportion, glass will absorb moisture and deteriorate. Who knew?! Although I have seen old glass that has a frosty appearance, as is seen in the pieces in the image below, I never realized it was a decay process. 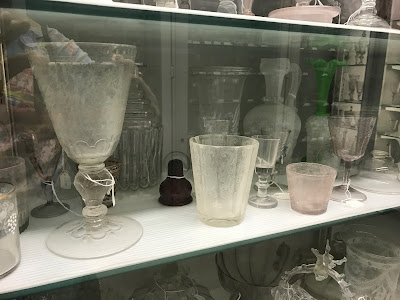 The museum had a visiting display of glass models created by Leopold and Rudolf Blaschka in the mid to late 1800's. These models are on loan from Cornell University. They were originally purchased by Cornell in 1885 to use as teaching models. Many of the invertebrates can not be preserved well, so the glass teaching models were the perfect tool to show would-be biologists what different marine species look like. Most of the models are only 2" - 3" in size. 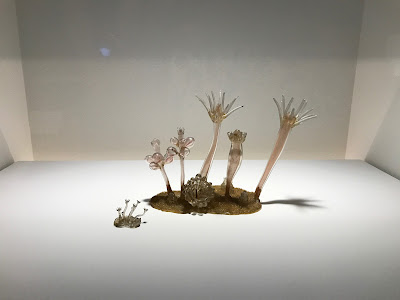 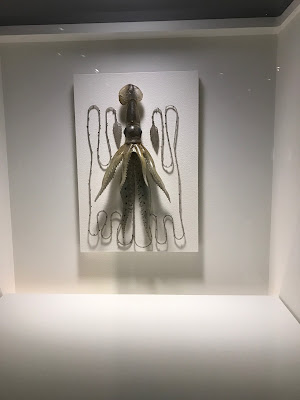 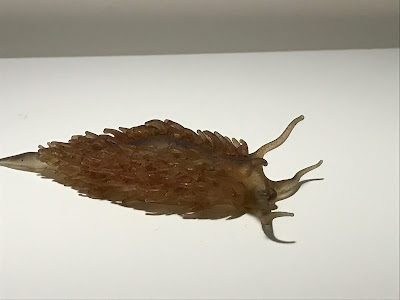 The spines on the tentacles of this brittle sea star were only 1mm in diameter. 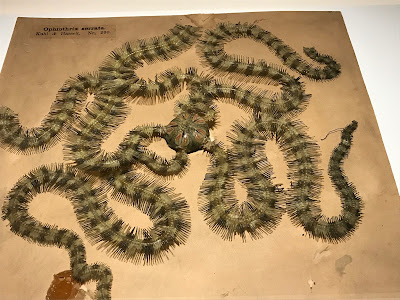 The models were marketed in the US by H. A. Ward.
The catalog lists all of the models and their prices, modest by today's standards! 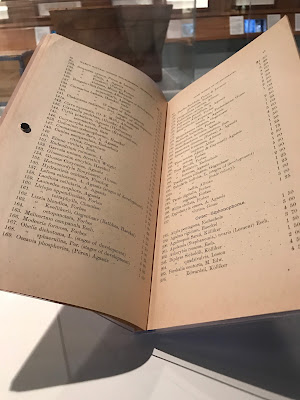 The Blaschka's also made glass eyes.
This was a display case found in their shop.
Eerie! 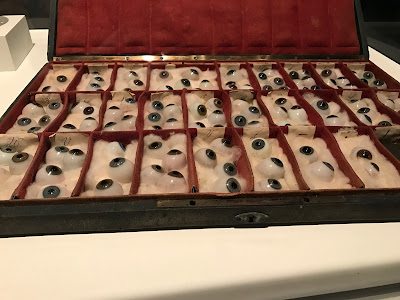 There were a number of contemporary exhibits, and the art was as varied as could be. It is amazing to see what people imagine and create. This display was called "Continuous Mile". The artist worked with Zulu women to string beads in coiled rope, and then arrange the mile of beaded rope into this cylinder. The artist wanted a project that would take a long time so she could get to know the women. 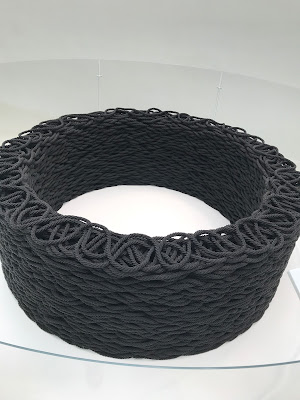 Here is a close view of the beaded rope.
It took over a year to create and required more than 4.5 million beads. 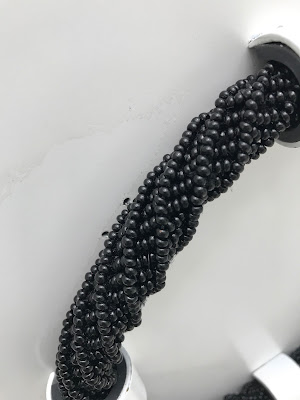 Some of the displays were suspended from the ceiling. 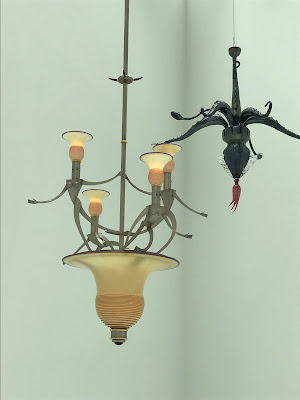 And this display shows what it could look like with a fallen chandelier.
The sculpture is called "Carrion" and is intended as a metaphor for the decline of the centuries-old glass industry of Murano, Italy. I always get tickled by the description of the meaning behind an artist's work. Sometimes I wonder who writes those things!! 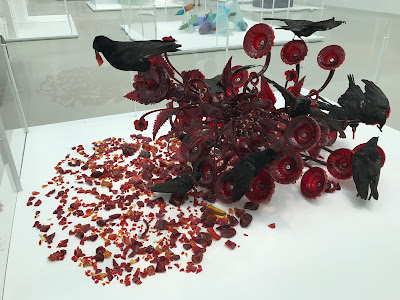 And in this sculpture, you may not be able to see the forest for the trees!
Each "tree" is comprised of glass shelves full of many kinds of glassware
Some of the glasses have flowers and birds, things you might find in the forest! 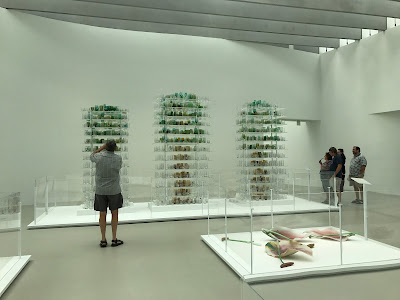 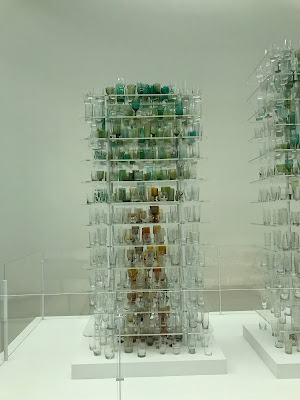 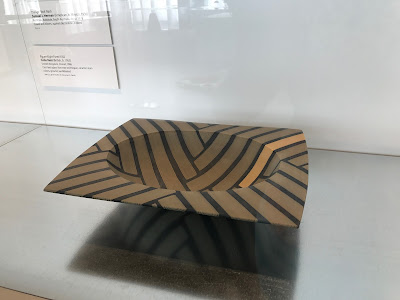 There are almost 50,000 objects in the permanent collection.
That's a lot of glass!

Corningware is no longer made by Corning, Inc. It has been made by
World Kitchen since 1998.
I still have a bit of Corningware in my cabinets!
I bet you do, too.

The Museum has miles of glass cases housing their collection.
(a bit of an overstatement, perhaps)
They use ZEP-40 Non Streaking Glass Cleaner to clean the cases.
I wondered about the number of fingerprints they must get each day!

They use conservation-grade cleaners with non-ionized water to clean museum pieces.
No Windex (it has ammonia)
No soaps with dyes or perfume.