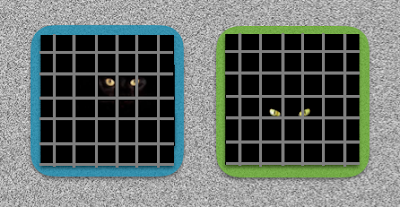 Yeah. Do I know you?

Sho 'nuf. I was two kennels
to the left and one down
from where you were stashed.

What d'ya think is going on?

I ain't got no clue.
Don't like it.
Nope, don't like it one stinkin' bit.
All this moving makes me want to puke.

Yeah. This is really scary.

Last week I contacted the Denver Dumb Friends Animal League. They have been in operation, taking care of stray animals, since the early 1900's. They place cats, dogs, horses, gerbils.... you name it. Any animal that is 'dumb', as in it can't speak for itself, they take care of it until they can find a suitable home.

We have sorely missed our little feral cat. She was such a great mouser. The mice have been celebrating since she has gone and have invited the neighbors in. It is time to get a new barn kitty.

I submitted an online form to acquire a "working cat" from the Dumb Friends League. Working cats are those that can not live in a home. They are usually feral and don't seem inclined to become friendly with humans nor comfortable living in a home. (They certainly don't know what they are missing!) I received a call the next morning. That was fast! The League has a working cat for me. His name is Pop. He's a brown tabby and is about a year old. We Dreamers were at their door in just over an hour. While we were checking in with the receptionist, she asked if we wanted one or two cats. Well, heck, why not? In just a bit two carriers came out, covered in towels. One held Pop. The other held Bob. We put them in the back seat of the truck and transported them home. I already secured the garage area of the barn. I put out food, water and litter boxes ready for their arrival, as well as a few blankets and towels here and there. We have hay stored in part of this garage. I am convinced that stacked hay bales are kitty playgrounds. Our cats have always enjoyed hanging out in the hay.... and coincidently, I believe the mice may enjoy that as well. Perhaps not when the cats are around, however! We were warned that Pop is a "door dodger", so Mr. Dreamy took some fencing and secured it in an arc just inside the entry so it would be a bit more of a challenge for the cat to escape while I was entering or exiting. I decided that Pop had just earned his name, and would henceforth be called "Dodger". I was not especially fond of the name "Pop", especially paired with his new buddy, "Bob". Too similar!

The kennels were placed in the garage. The doors of the kennels were opened.... but not before I took a picture of each cat. I figured I wouldn't see them for a while. I was right. I know they are there - I fill the food bowl and empty the litter box. This morning I caught a flash of movement. But, I haven't seen any more of either of them. They will be locked in for another week (a recommendation from the League). It will be interesting to actually see the cats once they can begin moving about. Welcome cats. I am glad to have you here. I wish you long, happy lives with us. 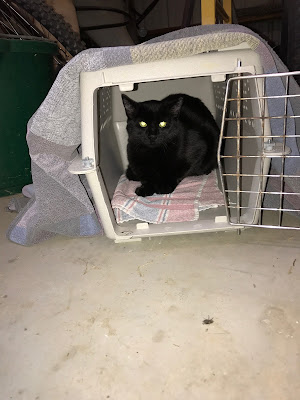 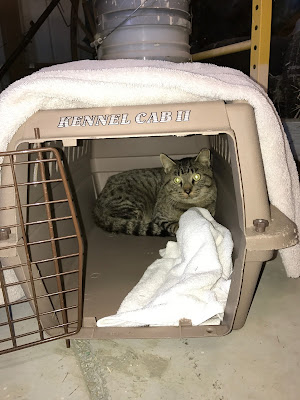