Upon returning home in the fall I discovered that we had a cat in the barn. I named the cat, "Stormy" because the first time I put all the pieces together and knew I had a cat in residence was when I could see the kitty prints in the snow after a storm. Stormy is truly feral. He loves hanging around the horses, in fact, he follows Malachi around the yard, and bats at Malachi's muzzle when he eats. But, he runs from me. Mr. Dreamy caught the first picture of Stormy using a long lens. 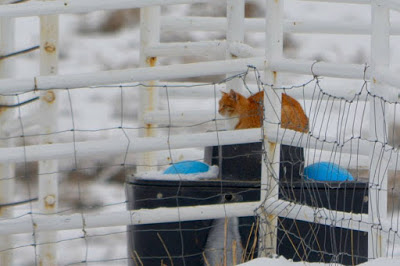 I surprised Stormy when I went to get hay one morning. He stared at me, trying to decide if I was a threat. I was able to snap a picture with my phone before he dove behind the hay. 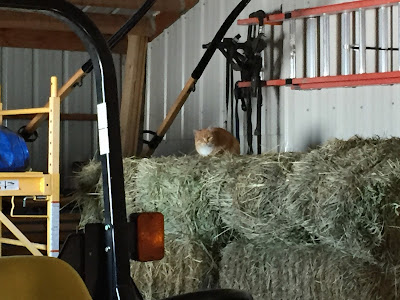 While we were traveling our house sitter sent me information that Stormy had kittens. Oh my! Stormy isn't a he, he's a she! Sadly, all kittens died. But, I realized that my little Stormy needed to be spayed so we didn't end up with unwanted cats.

There is a wonderful agency in Denver called the Divine Feline (formerly operating as the Feline Fix program). They provide traps for people who are interested in having feral cats in their area spayed or neutered, with the understanding that the cat will be returned to his or her environment and released.

I used the services for several barn kitties I have had in the past. If the cat is a pet, the agency charges $40-$50, and provides vaccinations for $10. They paint tattoo ink on the incision of female cats, so if anyone else takes the cat into a vet or similar agency for spaying, not knowing she was spayed, the vet will see the mark and know the surgery had already been performed. If the cat is feral, the surgery is performed for $20, which includes vaccinations. The ear of the cat is tipped so even from a distance one can tell that the cat was fixed. My previous cats were treated as pets. Stormy will get her ear tipped, since I don't think she will ever be a pet.

I drove into the city last week to pick up a trap. I took away Stormy's normal dry food and water. I've been putting yummy, smelly food and water in the unset trap for several days, moving it further back each time. Stormy is a sucker for gourmet cat food! She went into the trap each time and cleaned up the food.

Wednesday evening I set the trap, and within 45 minutes I had a cat! She was not a happy cat. She growled at me when I came in and covered her. Thursday, she had a date with the doctor. 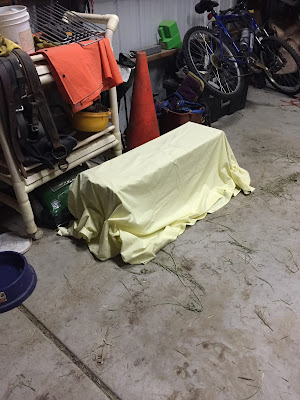 I set out early in the morning to make the 30 mile trip into downtown Denver to drop Stormy off.
I received a call when Stormy was ready to be picked up later that day. 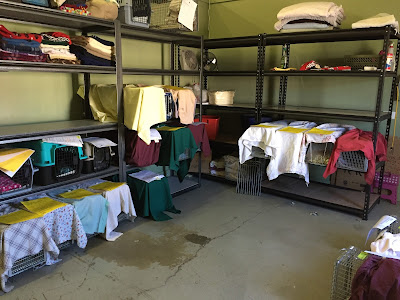 The volunteer reported that Stormy was a sweet cat but was very frightened.
She was spayed, received her vaccinations, and her ear was tipped.
The vet told me that Stormy was in heat.
It was a good thing we were able to catch her so quickly!

We returned home and after a night shut in the garage to sleep it off, I opened her kitty door and had a brief kitty "sighting" later in the day.