or
how not to sell something on eBay

In 2003 Lynne Truss wrote a book entitled, Eats, Shoots & Leaves: The Zero Tolerance Approach to Punctuation. She included the following story in the book to illustrate how important punctuation is to comprehension:

“A panda walks into a cafe. He orders a sandwich, eats it, then draws a gun and fires two shots in the air."Why?" asks the confused waiter, as the panda makes towards the exit. The panda produces a badly punctuated wildlife annual and tosses it over his shoulder."I'm a panda," he says, at the door. "Look it up."The waiter turns to the relevant entry and, sure enough, finds an explanation.Panda. Large black-and-white bear-like mammal, native to China. Eats, shoots and leaves.”


Periodically I run into a punctuation faux-pas, and think about this story. (Caveat: I probably make many, many errors myself. I really don't claim to be an expert!)

A few weeks ago I was perusing eBay for I had decided that I would like to find a Singer Featherweight sewing machine to take on the motorhome with me. It would be the perfect machine to use where storage is limited, and it would at least allow me to piece quilt blocks and do some basic sewing. In just a few days of watching numerous auctions of Featherweights, I came to realize that these vintage machines have quite an audience. Most machines in working order were selling for more than $300, and had lively bidding wars going on with each machine having 20-30 bids as the price climbed incrementally higher. Except this one.

As I was looking through the lists of Featherweights I noticed that this machine hadn't any bids. The item remained at the opening bid listed by the seller. No takers. If one were to glance quickly at the listing and the picture, I think I see why. The picture shows the case and two other things. The listing implies that the item to be auctioned is that which is pictured, a case and those "accessories". However, had the seller put one of the 6 other pictures up as the opening picture, one of the machine, and had the seller put a comma after 1946 Singer Featherweight Sewing Machine 221, Case & Accessories, he or she may have garnered more bids and sold it for a higher price. But heck, I'm happy! My new "old" machine has arrived, 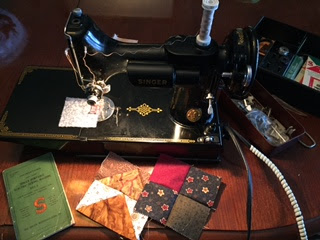