Do I Need a Twelve Step Program?

I think it is a disease.

It may be some sort of addiction.

In December I put up a post about finding an Elna sewing machine. The type of machine my mother had, and on which I learned to sew. 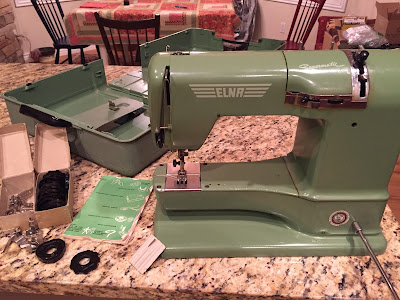 The machine actually worked! Having had a sewing machine catch on fire because it hadn't been serviced regularly, I decided to take my vintage 1956 machine to a sewing machine repair guy who loves working on vintage machines. He said it was a sweet machine, and that it works wonderfully, but needs a drive wheel to work a bit quieter. On my way home from picking up the machine, I made a quick stop at a thrift store.... not to shop, really, but to use the restroom. (It's and old lady thing. I had to go. I knew where the restrooms were located. No one would question my running in there. And, did I mention, I had to go!!) Afterwards, I walked around the perimeter of the store, and....

There's another green case. Another Elna!

This machine had a tag from a repair shop saying the motor needed to be replaced. I plugged it in. Funny, but it ran. It was noisy, like my other machine, but the motor was running, and the needle occasionally went up and down. I showed the tag to the sales clerk. I am almost embarrassed to say that she cut the price of the machine in half since the tag said it needed a motor. This machine was born the same year as the other, and after ordering drive wheels, I took both machines back to Bob, the repair guy. They are still there. He tells me he is about to get to them!

In the meantime, after lurking on a quilting Facebook page, I kept hearing about Singer Featherweights. I asked Bob, the repair guy, about them. His face lit up. He loves them. My little brain began to think about little machines and how wonderful having a very tiny, small, lightweight machine on the motorhome would be a wonderful thing. I began haunting eBay. And, as I wrote earlier, I won an auction and received a cute little machine.

So.... I now own two Singer Featherweights: 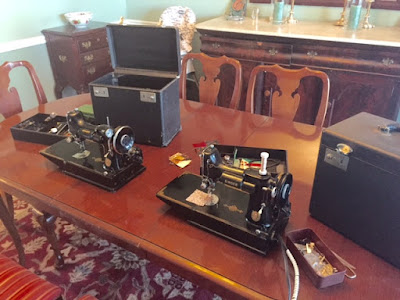 When I pick up the Elna machines from Bob, I'll drop off the Singers, and have him clean them up and help me decide which machine is the best, or rob Peter to pay Paul, cannibalizing one machine to help the other. Or, if they are both good, then maybe I'll sell one.

I can't wait to begin sewing with any of my vintage machines. Their heavy, solid metal case and works is reassuring. They are little work horses. Giddy-up... let's get going!