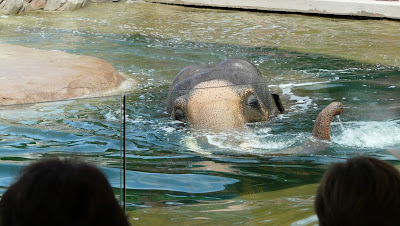 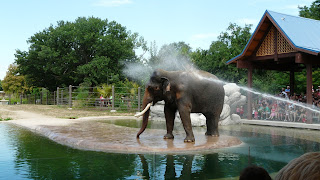 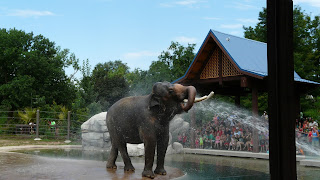 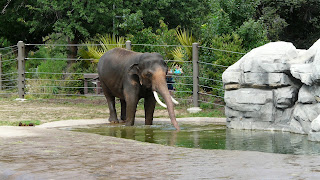 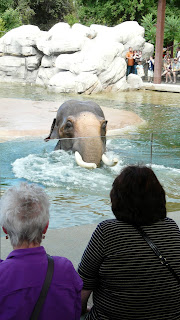 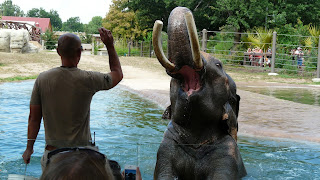 Groucho is a 43 year old Asian Elephant. He is Denver's largest elephant, standing over 10' tall and weighing a mere 12,400 pounds. Groucho came from the Ft. Worth Zoo when Denver opened its new "Elephant Passage" exhibit last year. About 10" of the ends of his tusks were sawed sawn* off in preparation for travel as there was concern that the tusks might get caught up in the bars of the crate he was shipped in, or, that he might jab himself, since the ends were close to his trunk.

We were told that Groucho is very independent-minded. He will enter the swimming pool if he feels like it, otherwise, he will turn and go back into a quieter area of the exhibit. Groucho is also a jokester. He decided to spray a young girl who was standing up by the glass fence. He also turned, while in the pool, and farted passed gas! He may not have thought it was amusing, but those of us who were still watching were tickled by the bubbles rising behind him!

Animals at the zoo are trained for husbandry purposes, not for entertainment. Each 'trick' prepares the animals to allow the keepers to examine, clean or take care of the animals' medical needs.


* sawed off? sawn off?
Google says 'sawn' is proper because it is an irregular verb, however, creating the past tense by adding "-ed" has taken precedence and 'sawn' is losing ground to 'sawed' - also, 'my dictionary resource indicates that sawn' is how the Brits would make the past participle and Americans would use 'sawed'.