Yesterday was G-O-R-G-E-O-U-S! It was one of those days that just screamed, "Spring is here!"
I was outside almost all day. We still have a lingering patch of snow here and there, but the paddock was dry and I could finally clean up every remaining, decomposing pile of poop. I watered trees. I watered my car. (I thought I had 'washed' it, but when it dried I realized just how much I had missed!) I did the annual maintenance on the wheelbarrow! What? You didn't realize they need tune-ups?! 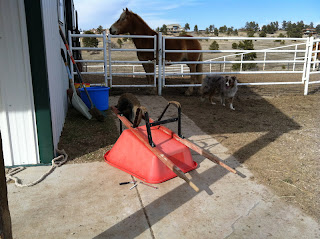 Pippin and Tucker supervised, but when Pippin realized my efforts were not going to result in food he left! Tucker went off to bother Mama Boots (who later got tired of his antics and swatted him a good one across the face!) A bolt holding the wheel was missing and my wheelbarrow had been performing side passes across the paddock. I replaced the bolt and added two large washers on the inside where the heads of the bolts were threatening to pull through the plastic. I'd say my manure mover is set for another 1000 miles!

Finally it was time for Kristine to come. I had been like a little kid waiting for a play date!  We loaded the boys up for a ride to the park for a ride! We spent about 20 minutes walking and trotting them around one of the arenas. Pippin was curious about everything! But finally, he settled down a bit and listened to me. He brought his head down and relaxed.... a bit. Next we were off for a ride through the trails. Neither of the horses had been on the trails, and I've only whizzed over them as a passenger in a carriage. Our path took us about 2 1/2 miles. It was just what the horses needed; lots of new sights. Some bicycles and people walking, mostly from a distance. A guy fishing and a few walkers with dogs. 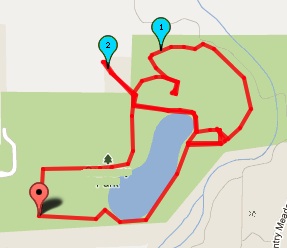 Then we took the horses through the carriage obstacles. Did I take pictures - no.... didn't pull my camera out this time. But, I do have some satellite images that kinda tell the tale! The fun thing with the obstacles is that you can go every which way in and about and around them. In the carriage driving events they post letters for gates and may have you going through 4 or 5 passes before you go on your way.

The first obstacle is a series of huge concrete pipes set on end. The pipes are about 5 feet in diameter and almost that high. Pippin didn't want a thing to do with them, but finally walked through them and later we returned and we trotted in and out and around. 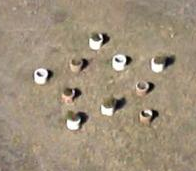 The second obstacle is comprised of treated timbers set vertically in the ground. Again, we walked and trotted through these and around them and nearby trees.

This third obstacle was made of sections of large logs, some up to 2 feet in diameter that are piled on top of each other. Neither horse liked these. Perhaps they felt this was good hiding for that mountain lion Pippin knew was following him in the previous post! Doc decided he would take Kristine away from there and keep her safe. However, he left so quickly, jumping to the left, that she was unseated. I turned and saw here perched on the the side of the horse, momentarily, before she 'dismounted'. Kristine was fine and being the wonderful rider she is, she mounted and took Doc back to the scene of the, er... dismount, and then schooled him in and about the logs. When I shared my interpretation of the event, Kristine commented about how gallant Doc was. I told her she had picked the perfect word to describe Doc and shared a link to my post about 'Goofus and Gallant'! 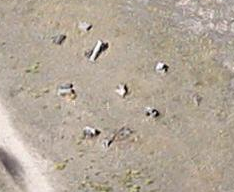 We continued on our ride, even going through a covered bridge. The horses were a bit hesitant, but proceeded across, despite the fact that the wooden planks are secured loosely with some sort of metal fittings and they made metallic rattling sounds. Maybe I should bring my tools from my wheelbarrow tuneup over to the park!

It was the perfect day to get out. We all enjoyed our ride. I came home happy and pleasantly tired from my activities. I hope you get to have some days with perfect weather where you can enjoy some outside activities, too.
at March 13, 2012