Imagine finding this fuzzy rodent in your bed! That happened to me a year or so ago. He (?) was part of an ongoing practical joke between my neighbor and me. 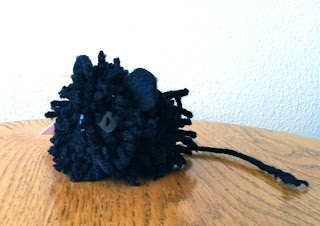 The joke began about two years ago when I noticed that my neighbor was setting a 'black box' trap to try to catch a ground squirrel. He (the neighbor, not the ground squirrel) is quite the joker (well, now that I think about it, ground squirrels are jokers, too. They taunt us and rarely get caught in traps!) I crafted this little 'rodent' and stuck it in his trap. (I guess you might say I'm a bit of a joker, too!) Several days later his wife called to let me know that her husband had found my little rodent and it made him laugh.
Being a fun loving sort of guy, he 'planted' it in our bed months later, while we were out of town and he was taking care of the critters and such. Ah.... sweet revenge.
Just before we moved I put the little guy in our neighbor's barn. Weeks later I received a call from him. He mentioned that he seemed to be experiencing an infestation of rodents in his barn! We both chuckled.
On Saturday, after my lovely brunch and drive with Boomer, I attended a jewelry party at our former neighbor's house. Imagine my surprise when I noticed my fuzzy little guy sitting among other stuff that collects on that unused end of the kitchen counter! We all had a laugh as his story was shared with others at the party.
Now that we've moved it will be harder for this guy to travel back and forth, but I'm fairly certain at some point, after a visit from our friends, this guy will show up somewhere in my house!
We miss our fun-loving neighbors!
at March 26, 2012