Chats on the Farmhouse Porch: Wooly

Today I could actually sit on our front porch, it's that nice out! Would you like to join me? We can sit on the swing, or in the Adirondack chairs. Well, I guess it would be hard to get all of you here, right now to chat, so we'll join Patrice's virtual chat!
This week Patrice asks:
1. What's your favorite clock- digital or an old fashioned face with hands?
I like clocks with character. I adore old grandfather clocks. My mother-in-law has one that has been in the family for eons. One ancestor didn't like the booming tones so had a tiny little bell put into the clock instead. It seems so funny to hear the tinkling bell to 'toll' each hour! My favorite clock, however, is a ship's clock. I was raised with one in the house and learned to judge time by the bells. I liked the fact that I could lie in bed, hear the bells and determine the time. In case you aren't familiar with the bell system of a ship's clock it marks the 4-hour watches for the sailors. The new watch would begin at midnight. At 12:30 AM there would be one bell. at 1:00 AM, two bells. at 1:30 there would be two bells, a hesitation, and then a third bell. 2:00 AM would be two sets of two bells. This proceeds until 4:00 AM when the bell would strike four sets of two bell sequences. That would mark the change of shift - I bet the sailors couldn't wait until 8 bells! The sequence begins again. So, in the dark of night, if the clock struck 5 bells. I could determine that it was either 10:30, 2:30 or 6:30. Not that specific, but one could usually tell.

image source
2. What's your favorite type of bird?
I enjoy watching large birds; hawks, eagles, ravens and harriers. I like living in an area where we can watch them fly. I'd love to see some owls... but with few trees we get few owls!
3. How do you feel about being in front of people?
I was a teacher. I was in front of people all of the time. But... they were little people! Years ago when I would have to speak in front of the parents I was always uncomfortable! Later my job required that I make presentations. I became much more comfortable speaking to an audience..... as long as that audience was under 100 or so. If the group was larger I became nervous. I participated in Toastmasters at the end of my career, just for the heck of it. I enjoyed the challenge of extemporaneous speaking and I liked preparing speeches for different purposes. I earned my CTM (Competent ToastMaster) but have never gone any further with the program.
4. What's the last item of clothing the you purchased?
I have been buying wool skirts, pants and sometimes jackets to cut apart to make hooked rugs. I visit GoodWill and the Salvation Army and look for their half off clothes! Last week I bought two pair of pants and a skirt. Hey... if any of you have some wool clothes you'd like to get rid of ... let me know! I'd be more than happy to take them off your hands!
5. Caption for Wendell:
Rip. Crunch. Munch.
I'm keeping my eye on you all....
if you touch my grass, that would be a mistake.
Big mistake! Big! HUGE!
Rip. Crunch. Munch. 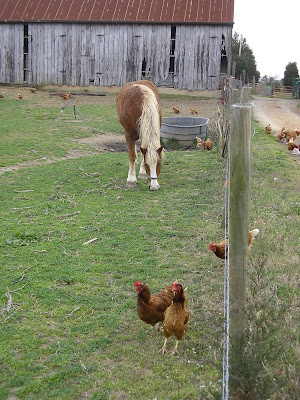 Click here if you'd like to see how others responded to Patrice's questions.
Enjoy your day!
at March 21, 2012

Email ThisBlogThis!Share to TwitterShare to FacebookShare to Pinterest
Labels: Chats on the Farmhouse Porch