The North wind doth blow and we shall have snow,
And what will poor robin do then, poor thing?
He'll sit in a barn and keep himself warm
and hide his head under his wing, poor thing.
This is a traditional British nursery rhyme from the 16th century. My boys used to sing this at their nursery school. Maybe I should clarify that statement...they sang this much more recently than the 16th century!

Yesterday we had a high of 59. At lower elevations it actually hit 70. Today the north wind has begun to blow and we have a winter advisory in effect. Brrrr! Currently the forecast is for 4-7 inches (geesh - forecast is for four...I wonder how many different types of 'for' I could use in a sentence if I really tried!) between tonight and tomorrow night.

Earlier this winter we had a brief snow storm. It snuck up on us after the sun went down. It was beautiful to watch the snow flakes falling in the lights from the house. In the morning the wind began to blow and began to redistribute the snow. At one point the average wind speed was 22 mph. The temperature was 19 F but the wind chill was only 1 F. Brrrrrr! It was not fit for man nor beast! 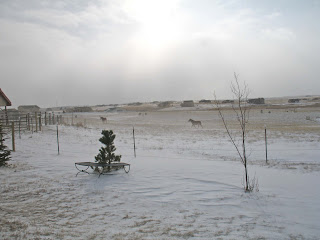 I tried to get a picture of the wind-driven snow but the camera couldn't seem to capture the wisps of snow picked up and tossed by the wind like the spray of water on a stormy sea. It only registered a general haze.  What you can see, through this haze of the blowing snow however,  are both Pippin and Doc high-tailing it to the barn hoping I have come out to take pity on them and toss them some hay in the comfort of their stalls!

So, I wonder what it will look like tomorrow morning? I guess I'll just have to wait and see!
at December 15, 2010