We were supposed to get a fair amount of snow, but that didn't happen. The storm slowed and went south of us. But, a few flakes were falling and it was a nice day to stay inside, nice and warm, and wrap presents. Somehow Tucker didn't get that message. He kept barking. My husband would let him out. I'd let him in. He'd bark again. I'd let him out, my husband would let him in. The dog was clearly saying, "I'm tired of hanging around the house. Let's do SOMETHING!" So I hopped online to see where the closest letterbox is hidden. I've never gone letterboxing but have read about it on the Laughing Orca Ranch blog. I was intrigued by the activity so had read more about what it is and how to do it on Atlas Quest  and on Letterboxing.org. I gathered a stamp pad, a stamp (I have designed a personal stamp, but haven't made it yet, so I used a wood cut that my husband had made as a child instead of using a commercial stamp) a notebook and a pen. I printed out the instructions for the letterbox I was seeking. I pulled on several layers of clothing. I grabbed the dog and his leash and harness, and we headed off to a local park.

After a brief walk I located the stump described in the instructions. I was so excited to have found my first letterbox. My excitement, however, did nothing to keep my hands warm in the 23 degree temperature! My fingers were killing me by the time I had finished. It was difficult to put the contents back in the letterbox and to get my things back in various pockets with fingers that had lost much of their feeling. 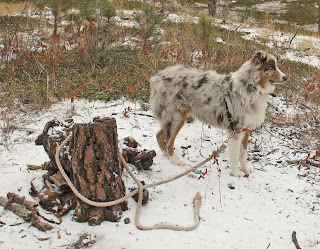 Tucker is standing guard by the stump where I found the hidden letterbox.
He doesn't seem particularly interested in the activity, however, he did try to eat my stamp pad!
Do you see the letterbox? 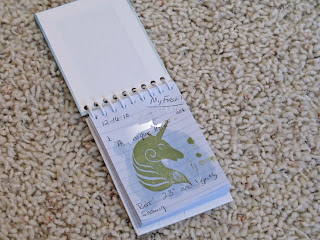 Here is the stamp from the letterbox. It's beautiful!
So, is this something I'll do again?  Most definitely. I had a nice feeling of accomplishment when I found the box. It was fun following the instructions. Tucker has tons of energy so going on a hike, even a brief one, is great for him, as well. I also like the idea of hiking/walking with a purpose.
In what ways might I better prepare for my next letterboxing experience? I need to put together a 'kit' that I can put in a backpack, instead of trying to carry it all in my pockets. The journal in the letterbox was a challenge to stamp and write in. It was a beautiful hand-made paperbound book, but it was very floppy. I need to carry something to support journals like this, perhaps a small clipboard. Any other suggestions?
What are my next steps? I want to finish making my own stamp. I'm using an eraser and will cut the design with an exacto knife. I'd also like to make my own journals. I did some bookmaking classes years ago and the technique I learned will lend itself to making beautiful journals. I'm trying to decide whether to stamp the letterbox stamps directly into a journal, or whether to use index cards and cut and paste the image into a journal. Any of you out there have preferences for one over the other?

I would love to hear ideas from other letterboxers...is that what one is called if they wander around following instructions to find and record a hidden treasure?!
at December 16, 2010