I love morning. (I apologize to those of you who are not inherently morning people...I know it has to be tough. I live with a slow riser!) I have always enjoyed hopping out of bed and beginning the day...with gusto! My usual morning routine is to pull on my jeans (and other garments), grab a coat, let the puppy out of the kennel, hop into my Bogs boots (in winter) or slide on my fake crocs (summer) and head to the barn.

I love hearing the horses call for me. Doc has a low rumbly nicker that starts somewhere deep in his chest and bubbles up. Pippin rarely nickers, he whinnies and it is high and shrill. As I sort out the hay Pippin demonstrates his ADHD traits. He walks into his stall. He makes one complete turn. He walks out of his stall. He keeps this up until I finally bring him his hay. He's the sort that wants everything right now! If he feels that I am delaying his meal, he will stop on his tour of the stall and stomp his foot. He knows exactly where to stomp in order to hit the metal piece near the bottom of the stall wall so that it makes a very loud ringing sound. Pippin knows just how to be obnoxious...to me and to four-legged critters. Doc waits patiently.

I weigh and carry the horses' hay in laundry baskets. When I enter the stalls I put the basket down, sweep a clear spot in the feed corner, and then dump the hay. Although my stalls have hay feeders, I really prefer that the horses eat from the ground. I worry that they will get chaff in their eyes, and if they feed from the hay racks the hay from Doc's stall falls into Pippin's water bucket. Doc will take one mouthful from the basket while I am preparing his feeding place. He chews his hay slowly and deliberately. Almost like he is thinking very complex thoughts. Pippin buries his head in the basket and pulls up the biggest mouthful he can manage. He chews quickly and dives into the basket again. He is very purposeful and driven with his eating. (I also have large, round stones in his feed bin to try to slow him down when he does get some feed at night.) Last year I used a NibbleNet to slow him down with his hay. After a few months he chewed through the webbing and I haven't repaired it or replaced it.That's someplace on the bottom of the 'to do' list. But since I seem to have lost the 'to do' list.....who cares?!

After seeing to the guys' immediate needs; hay, water and clean feet, I head out to their paddocks to pick up. Today I finally managed to get most of Pippin's paddock clean. Since we had some snow and a drift accumulated in his paddock, it's been hard to scoop. Either the poop is petrified and frozen solid to the substrata or it is in one layer or another of a snow drift, to be discovered during an archeological dig, or it is sitting mired in a pile of mud. The drift has melted, leaving its treasures behind. There are still a few pile remnants frozen to the ground, but I can get those later. (That's what I said yesterday.....and the day before....)

Then its back to the house, taking some time to play with Tucker along the way. There are those mornings where Tucker is disobedient and heads into the neighbor's pasture to play with the mini. Then my clean-up is interupted while I retrieve the puppy (can you call a 50-pound Aussie a puppy?)! I've begun to take him back to the house at that point, hoping that maybe he will figure out that if he stays around with me, he'll get to play a bit.

So, here I sit, enjoying my coffee and visiting blogs. My cheeks have that pinched feeling from being out in the cold and I feel happy and content with the world....at least for the moment!


I hope you all have a wonderful day! 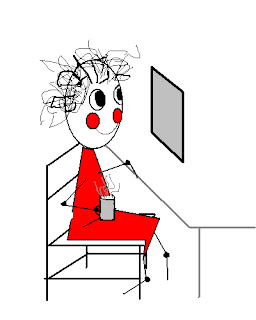