When we arrived in Prague we heard that the ship, Uniworld's S.S. Beatrice, was not going to be able to sail to Nuremberg, Germany, to pick us up as originally planned. Europe has had a very dry summer and the water levels of the Danube are very low. We heard of changes in itineraries, riverboat cruises becoming bus cruises, cancellations and where folks were bused from one ship to another on either side of the low areas. So, we were not surprised, just thankful that we would have a riverboat experience.

Nuremberg is about 2 1/2 hours by bus from Prague. The ship was docked in Regensberg, Germany, also about 2 1/2 hours away. We were given the option of going to either destination. Those of us who chose to go to Nuremberg enjoyed a city tour, perhaps a bit shorter than that which was originally planned for the city, and were then bused to Regensberg to meet the ship, about 1 1/2 hours away. So, we experienced a bit more bus time, and missed out on the usual free afternoon in the city to explore, but we did see some highlights.

We were lucky to arrive in the town square at noon when the Frauenkirche Clock,
installed around 1508, did it's noon display. 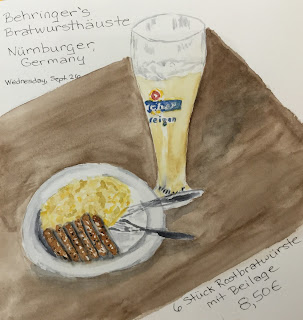 We left the sobering images and thoughts of the rally grounds headed for Regensberg, Germany. Shortly after we arrived, the ship moved on, trying to beat the falling waters of the Danube. I arrived and reconnected with Scott, who had dutifully unpacked both of our suitcases! See, he is "Mr. Dreamy"!