Passau - perhaps out of the woods

The further we went down the Danube the more optimistic the captain became about the continuation of our journey. He indicated that Passau would be a major milestone in our passage. We arrived during the night and set out on various excursions.


We Dreamers chose to take a bike ride for 27 km along the Danube, and we are so glad that we persevered. It was an idyllic ride! Except for the first bit that took us up narrow cobble streets in Passau, most of the trip was fairly flat, and most often along the Danube. I wanted to take pictures, but only got off a few before the Zuchtmeister (disciplinarian, for lack of a more apt term) yelled at me, "No! No! No! Do NOT stop!" So most of the trip resides on a shelf in my brain where happy memories are stored! To be fair, I should also explain that we had to meet the ship at a set time, and again, due to falling waters, the captain didn't want to dally. Therefore, our bike ride could not turn into a leisurely ride along the Danube.

We crossed this hydro-electric plant, dam and lock with our bikes. To get over the lock we had to carry our bikes up 35 steps, and then back down on the other side. It was no easy feat. However, we were rewarded with a stop at a Biergarten on the Czech side of the river for a bit of refreshment.
After our beer, we rode on for a short stint before arriving at the ferry landing. The Danube traverses the Wachau Valley in this region. It is pristine, and there are no bridges across the river for miles. Ferries of all sorts, from dangling cable cars, rafts that are pulled along a cable by the current, to large car/truck ferries, are seen along the route. We loaded our bikes on a ferry to cross the river to Engelhartszell where our ship was waiting. 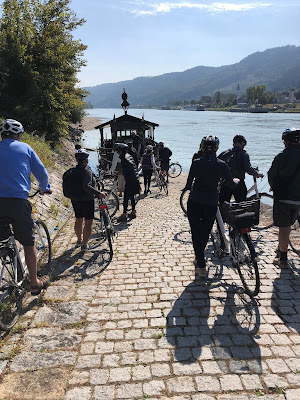 I was intrigued by the ferries on our trip in 2006, and took several pictures of the different sort of conveyances I saw. Unbelievably, I found this picture from that trip. It is the same sort of "Fahre", if not the same one, that we took with our bikes!

Traveling along the river after returning from our bike ride gives us such great views:
(Of course, it also helps when it is sunny and the temperatures are moderate!) 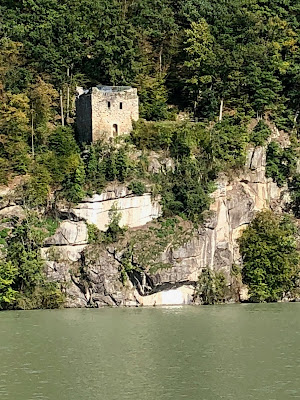 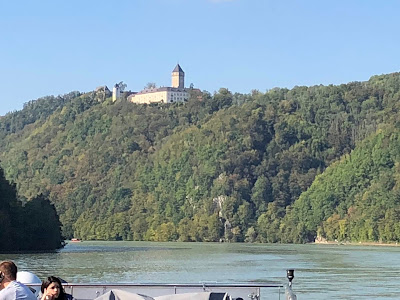 Our ship motored on to Melk, Austria, while we enjoyed another sumptuous meal. 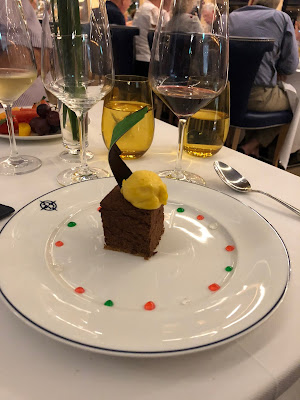