I've written a few posts about my new addiction to Singer Featherweight sewing machines. My first was an eBay acquisition, and the second was found locally.

When I picked up the local machine I realized that the bottom of the case was split and would need to be repaired. I began working on the case bit by bit.

You can see the split on the bottom of the case on the left side of the picture. The split went all the way across the bottom.  As I have acquired more machines (I think that might be another post in the future.) I have discovered that many cases need restoration as they have suffered water damage sitting in damp basements. Mr. Dreamy even bought a machine where the bottom and the lower edges of the case were missing and eaten away by carpenter ants??? termites???) 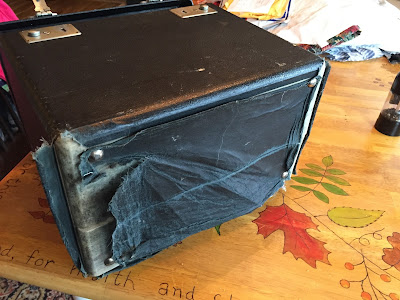 In order to restore the case, the first task was to get the hinges and the other hardware off of the case. They are put on with split rivets. (They remind me of the old brass paper fasteners I used in elementary school.) Those on the hinges were larger and had a heavier gauge wire than those on the latches. 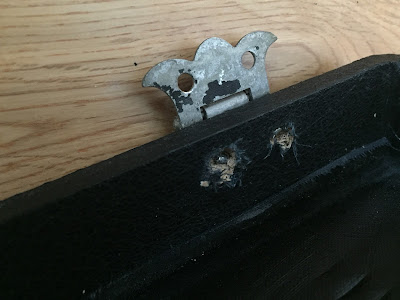 Looking online I learned the you can use a small screwdriver to wedge under the ends of the rivet on the inside of the case to bend them up. Once both ends are bent up, you can hammer it out a bit, or pry the hinge or latch off. Hah! That didn't work so well. After gouging my hand a few times I pulled out the Dremel and used a burr to grind away at the "legs" of the hinge, and then used an awl and hammered the rivet out.  This was probably the toughest part of taking the case apart! (You can see the remains of a few split rivets near the Dremel head.) 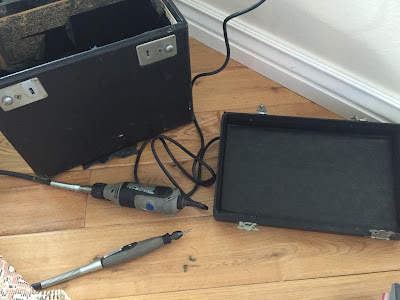 The next step was to remove the vinyl covering.This was easy, as Mr. Dreamy divulged the secret. The cover is glued on with animal hide glue. (Post about hide glue is here.) This glue is water soluble and readily softens with warm water. I had a large roasting pan that I placed on the stove. I heated the watered and dipped the parts of the case, one side at a time, into the water for a few moments, then peeled a bit of the covering off. Dunk, peel, repeat. 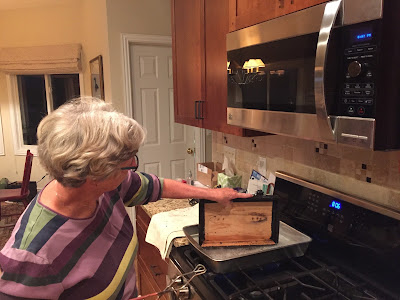 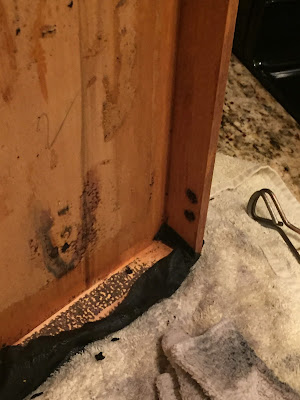 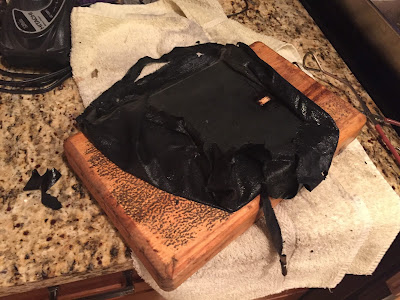 The residual glue was easily removed with a warm, wet towel and a plastic scraper. The case is made from a soft wood and has beautiful tongue and groove construction.  I discovered I had dented the wood in trying to clamp it as glue was drying where I added adhesive at the corners. Next time I clamped it, I used small wood blocks to avoid this happening again. I used a wood filler to patch up dents, those I made as well as others, and dings.

This case was used for a 1938 vintage machine. The case had a leather handle, which was in poor shape, and in addition to prongs that go through the case to hold the handle on, it also had leather tabs that are sewn through the vinyl and then through the case. I used a razor blade to cut the threads, straightened the prongs holding the handle and hammered it out, and then used needle-nosed pliers to pull the threads out of the case. The handle was in poor shape and would not be safe to use in the restored case. I had a Bakelite handle from another case that I used. But new handles are available through the Internet.

I purchased some 3/8" plywood and cut it to size to replace the bottom of the case. I used hide glue to secure the bottom to the case, and sanded the corners and the edges to round them similar to the original.

The next step was to cover the box with Tolex. Tolex is a vinyl fabric that has been used since the 50's to cover books, amplifiers, and... Featherweight cases! There are a number of suppliers of Tolex
on the Internet. 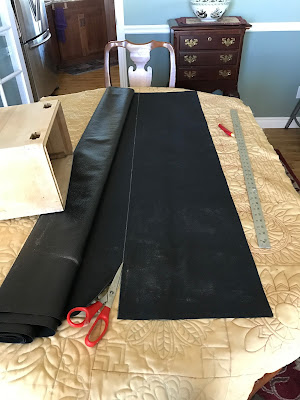 I chose a lightweight vinyl and it went on quite easily. I stuck with the traditional black, but in hindsight wish I had picked something wild and crazy!,. I mixed up some hide glue and water in a large can, and kept it warm in a rice cooker/slow cooker. Using an old paint brush, I applied glue to the outside of the case, wetting the case first so it wouldn't suck all of the moisture out of the glue, and then applied the Tolex cover, one side at a time. I taped the seam where the Tolex lapped near a back corner, but later had to reglue the vinyl on vinyl area using a modern craft glue. I tucked the vinyl around the edges at the top, and put it top down on the table to work on the bottom. 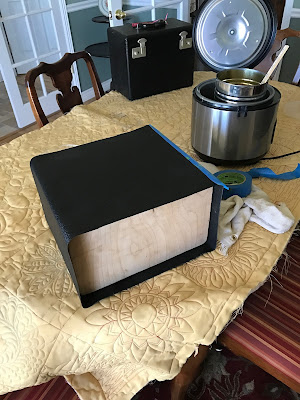 After 'wrapping' the case in Tolex I reattached the hardware. I could not find split rivets in the correct size, so settled for small black screws and nuts. 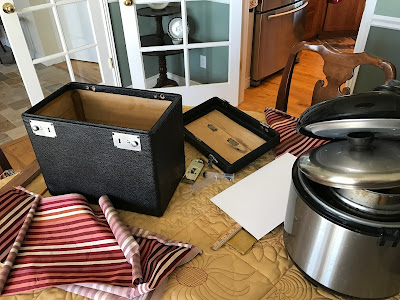 I found a jazzy cotton/silk blend of fabric at an upholstery fabric shop and glued that on the inside. 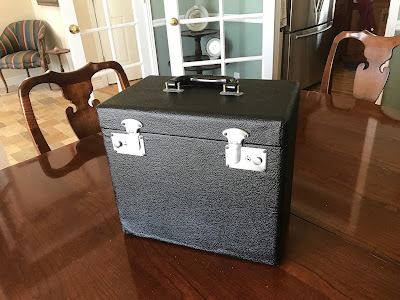 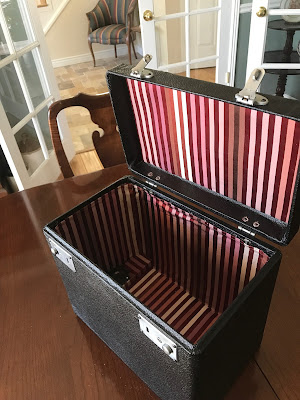 It is far from perfect, but it is now serviceable and looks tidy and clean. I am sure that the I will find the next case I restore to be much easier and proceed much faster!