Chris and Zoe chose to forego a large wedding, and to get married at City Hall in San Francisco instead. We planned to visit them on our trip, and Zoe's mother could also come for a visit, so they decided to get married in October. I was delighted.
We met them at City Hall on Monday morning. They had a 10:30 appointment to get their marriage license and an 11:30 appointment for the ceremony with the Judge. Zoe and Chris ran into a snag when they met with the County Clerk to get their license. The documents they had on hand could not be used to authenticate Zoe's name, for various reasons too complicated to go into. The only document that was acceptable was Zoe's Social Security card, which they did not have with them. I snapped this picture as they left the office, obviously on a mission. I cracked up when I saw the expressions I had captured on their faces.... I couldn't resist adding some thoughts that may have been going through their minds: 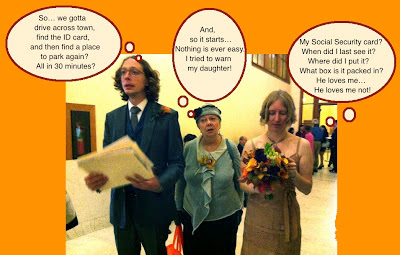 What do you believe they were thinking?


The card was found quite promptly. The certificate was issued, and the wedding ceremony went on without a hitch.... almost on schedule!
at November 02, 2012