Hay prices continue to rise in our part of the country. We have had a significant drought for several years. Some farmers didn't get a second cutting and even their first cutting wasn't as productive as they had hoped. The hay produced in this area of the country is being purchased by ranchers in other hard hit areas, which is driving up prices for local folks. For perspective, last year at this time I  'topped off' my hay supply (so it would last until the 2nd cutting this year) at a cost of $10 per 55-65 pound bale. Recently I've heard that my friends have paid as much as $18.95 per bale!

Holy hay bale!
Ouch!
I saw a lot of hay in the field in the northwest this summer. Many times as we drove from one point to another, we could see farmers baling hay as we passed. I noticed that most of the bales were large round bales, or large rectangular bales measuring 3 or 4 feet square by 8 feet long.

I guess one can't blame the farmers. It is much more economical to create large bales, requiring less time and less fuel to bale each acre of grass, hay or alfalfa, and also needing less man power (but more machine power) to handle the finished product. But most "backyard farmers" don't have the machine power to handle bales of hay that can weigh 1000 pounds or more. In response to their needs, companies that reprocess large hay bales have sprung up. They open the large bales and rebale them it into what we call "small squares" - the traditional hay bale size and shape.

Some of the hay that I have been feeding the guest horses evidently has been reprocessed. It is very crumby! 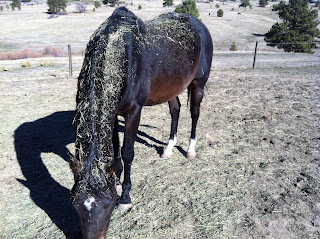 Shyloh stood downwind when I tossed a flake of hay in the paddock,
and now she's wearing her dinner.
Since then I put it in a wheel barrow and distribute piles instead of tossing them. 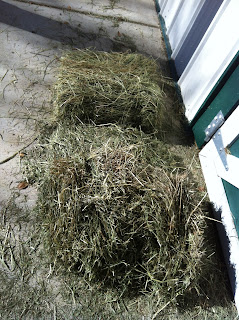 and the flake falls apart in your hands. 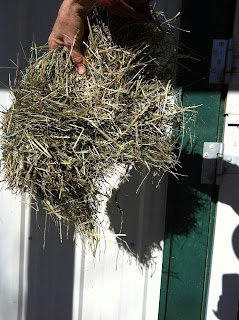 But, the taste testers don't seem to care....
one way or another! 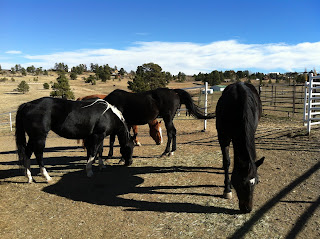 I don't particularly care for the rebaled hay. Besides the mess in trying to handle it, it serves no purpose putting the hay in a NibbleNet slow feeder - it sifts out onto the ground. It blows around easily in our wind. I wonder if the horses get has much chewing and reflecting time. I also don't like their increased exposure to the sand and dirt. At least with longer stalks of hay, the horses can easily 'lip up' a few stalks, without getting dirt, something like playing pick-up sticks. The reformatted hay seems to have much more chaff, and seed heads, which they love, but how much sand are they getting when they try to hoover up the little bits?